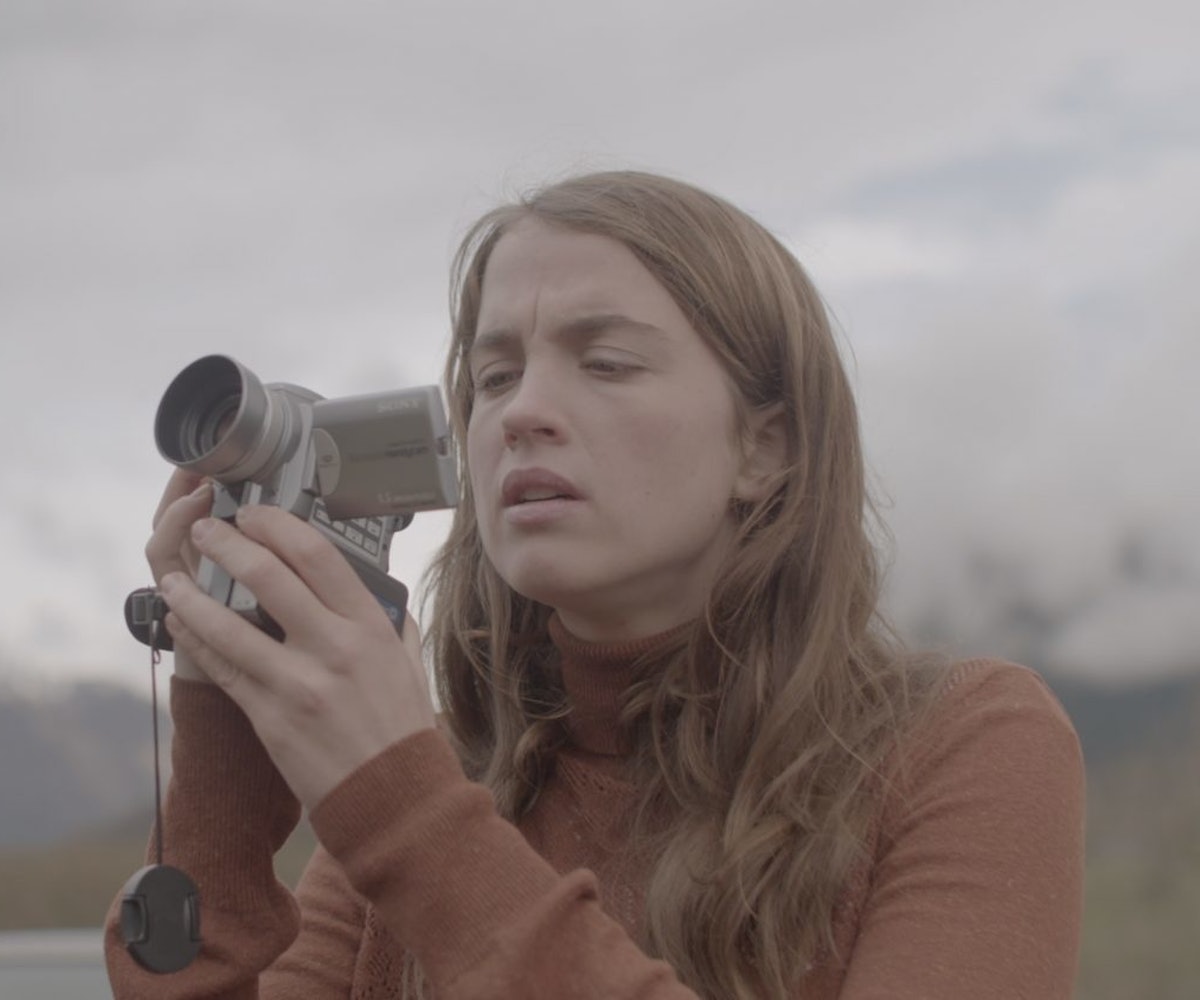 "Killer style." That phrase, repeated like a mantra by psychopathic fashion maven Georges (Jean Dujardin, The Artist), comes to define the film Deerskinas it tromps deeper into homicidal mania. He spends the svelte 77 minutes of odd bird Quentin Dupieux's latest film — that showed at the 2019 Cannes Film Festival, was set for a March 20 U.S. release — on a single-minded quest to be the best-dressed guy in the French countryside, even if that means killing everyone in his way. It begins with a devastatingly handsome deerskin jacket, which confers a vibe so powerful that Georges must complete the look with boots and gloves pulled off the dead bodies he leaves behind. Soon, he's offing everyone unlucky enough to cross his path, stripping them of their inferior jackets until only his remains.

But at the end of the day, to Dupieux, it's still just a few interconnected scraps of fabric. "The movie's not about the jacket," he tells Nylon. "The jacket is madness and freedom. It could've been a saucepan, whatever, a fork. It's about what we put on it."

Three extremely stylish people have convened in the moment's world style capital for a discussion of — what else — style. During a spare half-hour at the Cannes Film Festival last year, Dupieux, Dujardin, and costar Adèle Haenel (Portrait Of A Lady On Fire) sat down at a beachside bungalow to expound upon their personal sartorial philosophies and bury their toes in the most glamorous sand the Cote d'Azur has to offer. (With the exception of the director, who sported the all-deerskin ensemble used during shooting, footwear included.) Going by the conventional wisdom about a person's wardrobe being a form of self-expression, a boilerplate question about which item in their closet they're most fond of might as well be a Rorschach test.

"I don't know if I'm attached to things," offers Haenel. "I don't think I am." The response paints her as someone more committed to the life of the mind, an analysis borne out by her approach to performance. She eschews the actorly pretension of regarding the character as a separate entity outside herself, instead approaching the role of Denise like a set of ideas. "I don't think about my character as a person I'm close to," she says. "It's a point of view. It doesn't exist before, or after. It's you, inhabiting that point of view." She speaks about the craft of being a thespian matter-of-factly; Georges recruits Denise to assist him in videotaping his slayings on a camcorder, and with industry experience dating back to her teen years, the demented slant on the production process came perfectly naturally. "If I had to ride horses, that would be difficult, I don't know how to do that. I never thought about it." She shrugs the Gallic shrug.

"I switch," says Dujardin, in response to the initial inquiry. "Sometimes I'll be in love with a pair of shoes, wear them all the time for months, and then switch to something else. I'm always finding something new." An armchair therapist would clock him as a man of discipline and dedication, throwing all of himself into one thing at a time. They wouldn't be far off, as the one-time Oscar nominee's musings suggest. He prefers to immerse himself in a part, considering the psychology from every angle. "I didn't actually play the character as violent. I tried to play him as normal, which I found even more scary."

His strategy proves chillingly effective, as shown in the sequences displaying Georges going through his preparations like they're basic tasks. He cracks a blade of his ceiling fan and sharpens it to a lethal razor with the same dispassion the average person brings to vacuuming. "I never thought I'd be offered a part where I'd be asked to do this kind of mundane daily things," he says. "Everyday things that a man does when he's alone. These are the scenes that aren't shown in films, usually left in ellipsis. I found that very exciting."

Dupieux takes his turn with the prompt: "Old leather items that I keep, but don't wear. I had an obsession with this exact kind of jacket, with the fringe! I was checking online, lurking, waiting to buy. It was sold by a famous brand, super-expensive, so I never got it. But I was dangerously close, every time." Again, his thoughts gel perfectly with the statements in his work, much of which has revolved around a desire to possess and enshrine the past. The outré premises of his films — such as Rubber, in which a sentient tire uses its telekinetic powers to go on a rampage through human society — belong to a wilder era of independent filmmaking, and he sets his visuals to match.

"I'm attracted to old stuff more than new stuff," he says. "I don't like iPhones, and I hate digital movies, they all look the same. They look sharp and clean and gross. I want my films to look soft."

It's easy to read Deerskin as the primal howl of an aesthete, someone driving himself to insane lengths to capture the image he envisions in his head. Dupieux teases out the metaphor with the extended interludes of Georges and Denise as amateur filmmakers, their rough trials conveying a curiosity and adventurousness in league with their director's. He gave his actors free rein in these scenes, at one point locking Dujardin in the inn room they made their set and letting him have at it. "I was some sort of monkey while doing it, exploring and playing around," Dujardin recalls.

"I thought of me as a teenager, trying to make short films with a video camera, plugging it into the TV and watching the footage I'd shot," Dupieux adds. "When you see Jean trying to film — because he is only trying — that's a bit like my first experiments… But some of those shots, I really admire! I plan on stealing from Jean for my next film. We were joking that he's going to start asking for royalties."

However much authorship he may have ceded to his star, for Dupieux, this remains an intimately personal film. As precisely reflective of his artistic sensibility as his choice in attire, it's all of a piece with his inimitable killer style. His wisest insight, however, affirms that whatever ineffable "It" we refer to as "style" doesn't come from things, but from somewhere deeper within. It's a pathology, one out of control for Georges but fine-tuned for spectacular results in Dupieux. In his way, he tailors his films to be objects of fascination no different in essence than a great jacket or favorite pair of jeans. It's all about making something that someone else will be able to tap into, and in doing so, find some part of themselves.

"One of the good things with my movies is you can project whatever you want onto it," he says. "You can decide, because it's not something you know. It's all your choice. It's what you make from it."

Deerskin was set to release in select theatres on March 20.

NEXT UP
Entertainment
The Meaning Behind Paramore's Disillusioned Anthem, "This Is Why"
Fashion
12 Lovely, Lingerie-Inspired Street Style Looks At London Fashion Week
Fashion
There’s So Much Green Happening At Paris Fashion Week
Beauty
September 2022’s Best Beauty Launches Will Keep You Cozy And Cute Throughout The Fall