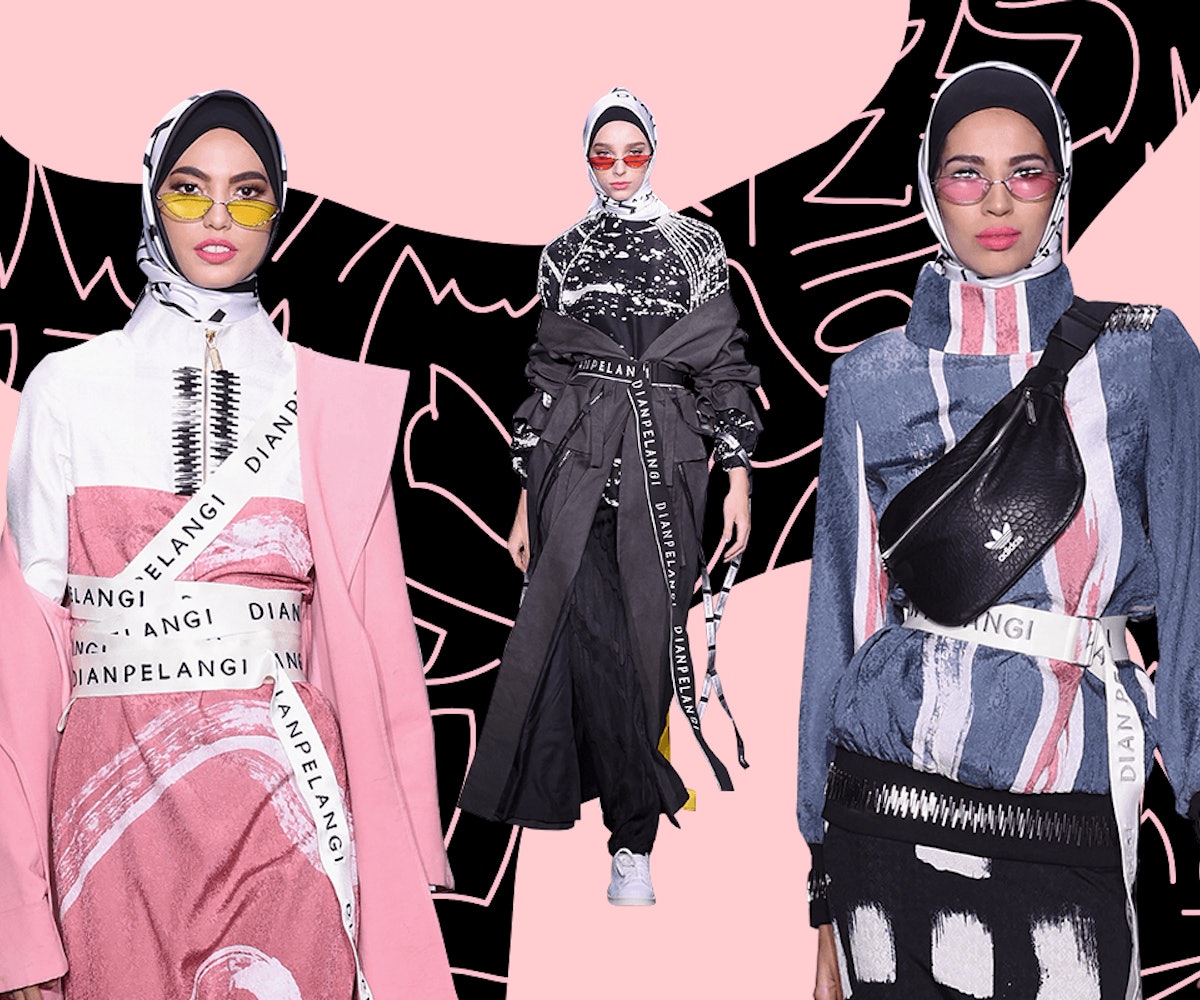 You could say that a career in fashion design has always been Dian Pelangi's destiny. Her parents founded her namesake label back in 1991—the year she was born—after all. Fast-forward to almost three decades later, and Pelangi has taken the brand founded on Indonesian and Muslim tradition and reinvented it for today's modern modest fashion customer, while still holding true to its roots.

This past February, Pelangi showcased her Fall 2019 collection at New York Fashion Week's Indonesian Diversity showcase; her collection paid homage to New York City, was inspired by social media, and resulted in an incredibly colorful offering of modest suiting, separates, dresses, and hijabs, all with an athluxury twist.

Bold stripes and classic batik prints were seen in dark hues, and the looks were dotted by pinks, yellows, and blues, adorned with logo-covered belts and hijabs and paired with belt bags, sporty sneakers, and a rainbow array of tiny sunglasses—modest fashion with a modern, streetwear twist. "I tried to interpret the uniqueness and diversity of styles of the social media darlings, especially the New York City hijabis, with typical Manhattan street style—modern, dynamic, and sporty," says Pelangi.

The juxtaposition between classic Indonesian fashion and current western trends is what makes Dian Pelangi such an exciting designer, and one on the cusp of a real movement. "Modest fashion itself is evolving, depending on cultures from various countries and interpretations from Muslim women themselves," she says. "It's part of the global market, which can be seen from secular brands collaborating with hijabers or modest fashion designers, and that will continue to translate in collections, the same as western fashion."

While Pelangi's collection was definitely a notable newcomer of NYFW, don't be fooled: the Dian Pelangi brand is already well established in Indonesia and surrounding countries—and was actually launched by her parents. It wasn't until after she graduated from École Supérieur des Arts et Techniques de la Mode in Paris back in 2008, that she took over—and transformed—the brand, making it more global.

"Since I became creative director, the brand has become known for its vibrant color palettes, using the rainbow and the global Islamic community as my key design inspiration—all while not losing touch of using age-old techniques such as batik, tie-dye, and handmade beading," she says.

Through the four labels under the Dian Pelangi umbrella—Privé (its couture line), Krama, Nom, and Men—the brand not only reaches the younger, style-savvy modest customer following the new, modern wave of modest design but also long-time lovers of its more traditional designs.

Since taking over, she's opened 14 stores across Indonesian cities and Malaysia. She's also helped to grow the Dian Pelangi brand's e-commerce presence, making it available to customers around the world. And based on her debut NYFW showing, we can safely bet on seeing it carried in Stateside boutiques, soon.

Pelangi is more than just a fashion designer, though. Aside from taking over the reins at the label her parents named after her, she's long been an influential force in the world of Muslim fashion, and her whopping 4.9 million Instagram followers prove it. Back in 2013, she released a book celebrating hijab street style, a visual collection of Muslim women that have inspired her throughout her travels. In 2015, she took part in the Designer in Residence initiative at the London College of Fashion, where she advocated strongly for diversity in the industry.

Pelangi also works to build confidence in other Muslim girls when it comes to styling their hijabs, once organizing a hijab styling workshop as part of the British Council's international fashion showcase. "I always share my outfits on social media—and starting from there, people often asked how I styled various looks, and that's when I thought about arranging talk shows and seminars where I can directly teach a tutorial," she says. "This way, the audience can see that it's actually not as complicated as they thought, and it also gives them a lot of inspiration for daily hijab styling."

Pelangi hopes to see other brands follow her lead and create modest fashion that is "dynamic, vibrant, and chic." Through the growing market for stylish modest fashion, she hopes to see modest style ideals spread beyond just the Muslim customer. "I want this fashion acculturation to be worn by anyone, whether they're wearing the headscarf or not, Muslim or non-Muslim." She also hopes that modest fashion brings more attention to the halal lifestyle so that more halal products (cosmetics, food products) begin to emerge and thrive on the market.

To shop the most current offerings for Spring 2019, you can contact the brand via WhatsApp listed on its Instagram.