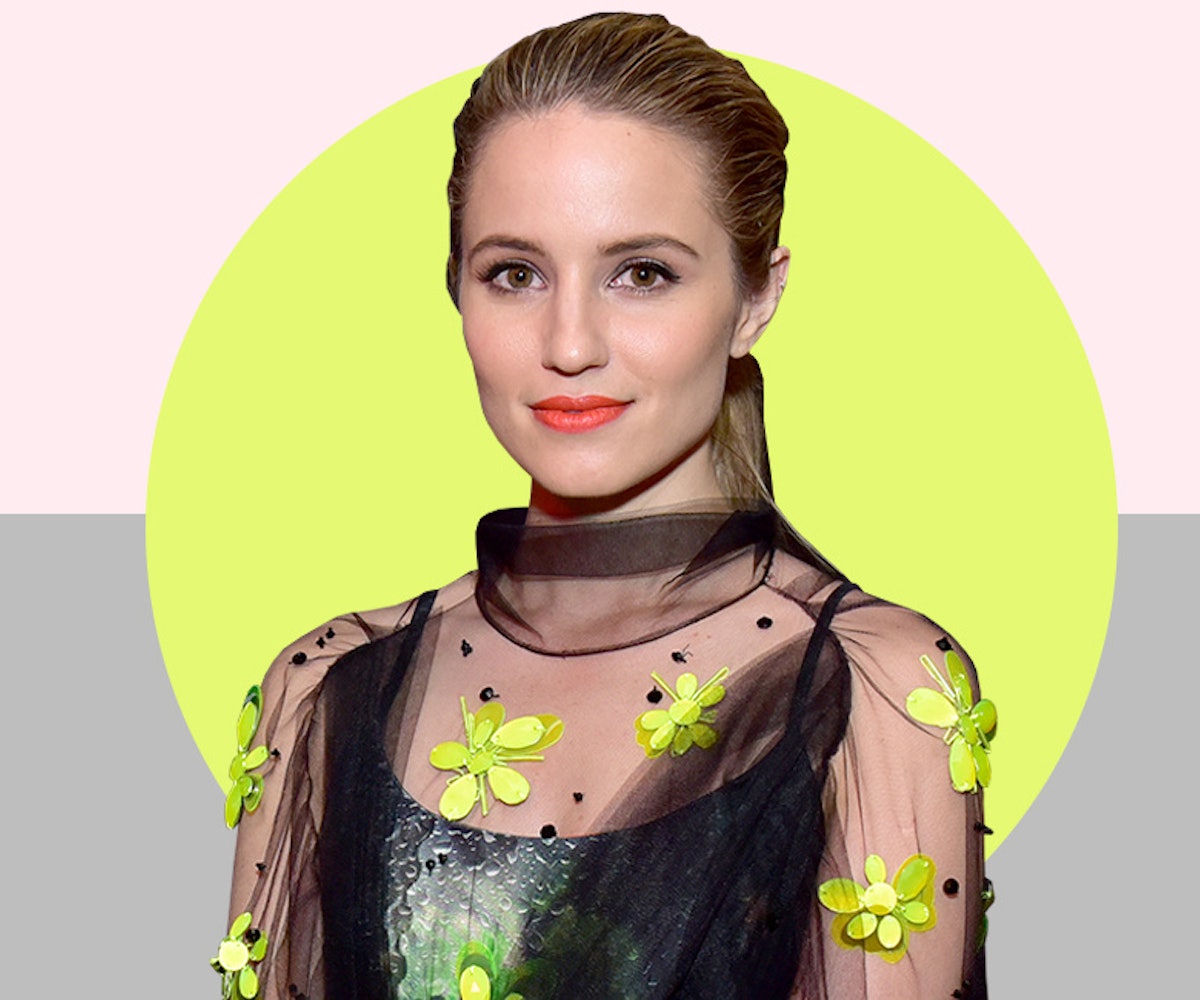 Dianna Agron doesn't want to choose between acting and music or acting and anything else; she'll have it all, thank you. And just like Agron isn't keeping herself restricted to one career path, she also doesn't feel like restricting herself to only the biggest projects, and keeps an eye out for engaging, smaller-scale things as well. Agron knows better than anyone else that different moments in time require different creative outlets.

Agron entered the public eye during a very specific moment in time with a very specific project: She became a household name because of her role on the television series Glee (which, if you're like me, you watched religiously every Tuesday, then every Thursday, then every Tuesday again—until the plot got too complex). She tells me on the phone that the show was everything that she wanted when she first came out to Los Angeles to pursue an acting career, because it was something that let her sing, and dance, and act. "When I was a kid, I was watching musicals, so I actually thought that that's what becoming an actress meant," she said. Fitting.

As of now, Agron has found out how to quench all of her creative thirsts at once: by diversifying her projects, and often. Tomorrow, she begins a two-week long residency at the Café Carlyle, where she will be singing to a small room of people.After starting her career in a recording studio every week for Glee, and then performing at huge Glee: Live concerts for the show's fans, she's just as, if not more, comfortable on a smaller scale. "I forget that there's ways like this in which I can engage on such a personal level and share this deep, deep love I have for music in an intimate space," she says. "I know for other people, playing on a big stage in a big arena gives them that big adrenaline rush, but I do find that in a small room."

Her set at the Carlyle will have her singing famous songs by female musicians from the '60s and '70s, like Nico and Nancy Sinatra. "I'm just so in love with that period of music," she says. "The arrangements are so complex, they're so sonically interesting." When I asked if re-interpreting the songs in a modern context reveals anything new about them in her eyes, she says no, that there's a universality with the songs she is singing. It's interesting that she doesn't see how the words of women from decades ago could have a different context now, but I take my raging feminist goggles off so that I can try to follow her.

"For a song like 'These Days' by Nico... I listen to it, and I'm like, That could be written then, that could be written five years ago, that could be written now." The messages of the music, their strength, doesn't change with time, she says. "It's self-reflective and gorgeous and contemplates her place in life and where she's going and what she's happy and sad for." Though the songs she sings are all about love, she notes that there isn't a consensus reached, but the set, instead, shows "conflicting emotions on love." "It's very funny, the flip-flopping between 'I'll love you forever' and 'Don't ever try to woo me, I'm not that person.'"

Beyond the music, Agron has a forthcoming film, Berlin, I Love You, which will be released later this year. It's the third installment in the Cities of Love series (the other two being New York, I Love You and Paris, Je T'aime), which spotlights multiple stories told through the lens of one city—in this case, Berlin. Agron directs one of the film's 10 segments, which she also stars in alongside Luke Wilson. Having only directed one part of the film, she loved watching it as an unknowing viewer. "If you're in a movie that you're in every scene of the movie and you've been there on set witnessing it and experiencing it, there's not as much to be surprised about when you watch the film—if you watch the film," she says. "So a project like this is especially delightful because you get to go in as a pure viewer to the point that your segment is on."

She tells me that this is a departure from the projects that she has worked on recently, which, of course, is a result of her wanting to change her lane. "You kind of have to alternate back-and-forth," she says of the shift between genres that came when she signed on to direct and star in the segment of the film. "With my two films that most recently came out—Novitiate and Hollow in the Land—for me, they were very heavy, very serious pieces. And so, when I went and directed the segment of Berlin, I Love You with Luke Wilson, it was like, Oh, this is light and comic and fun."

Not only was her segment of this film different in that it was funny, it was also her biggest directorial project to date, as she's primarily stuck to directing smaller-scale independent films. She says that at one moment in her directing the segment, which she did in one day, "I looked out and I had a crew of about 50 or 60 people and a crane, and all these things, and I was like, Okay!" She says that it was fulfilling to tackle the challenges presented to her and the ways in which she had to quickly learn how to iron them out.

But she's just as excited to have a crew of four as she is to work with dozens of people "around you, asking for things." She reminisces on a short film that she directed back in December, which had a super-tiny crew and "was such a great reminder of the beauty of guerrilla filmmaking." When there are so few people involved in a project, "it's amazing how much you can get away with." She explains, "We shot the whole movie in London in the most crowded passages, and people just thought we were doing this little student film or whatever."

While talking about her various projects, I suddenly understand why Agron doesn't want to differentiate between small and large work, or between fields: She doesn't think hierarchically. "The biggest projects that I've been in, the smallest projects that I've done—they all mean the same to me, and they all fulfill me in the same way." She gets the same type of thrill from every piece of work she puts out, so she can relate to someone who is content with her place, even if it isn't at the very top of the ladder. "I can relate to somebody who thinks, I control this art form, I make these puppets, I tell these stories, I have these connections, and it fulfills me. I have that."

Agron is lucky to be in the position to choose between commercial and indie, and she's privileged with options of choosing which way she wants to take her career at any given time. But it's also true that her start on a show as famous as Glee presented her with a lot of expectations, and she has chosen not to feed into the narratives that people have put on her. "Everybody has opinions about what artists should do," she says, "but I do think, ultimately, you have to honor what you need that year, that time period." Constantly changing lanes doesn't necessarily bend to everyone else's expectations, but ultimately, it's not about everyone else: "It goes back-and-forth, your wants and desires."

Dianna Agron will be performing at the Café Carlyle from tomorrow, January 22, through February 2. Tickets are available here. Her film Berlin, I Love You will be released in select theaters and on VOD February 8.