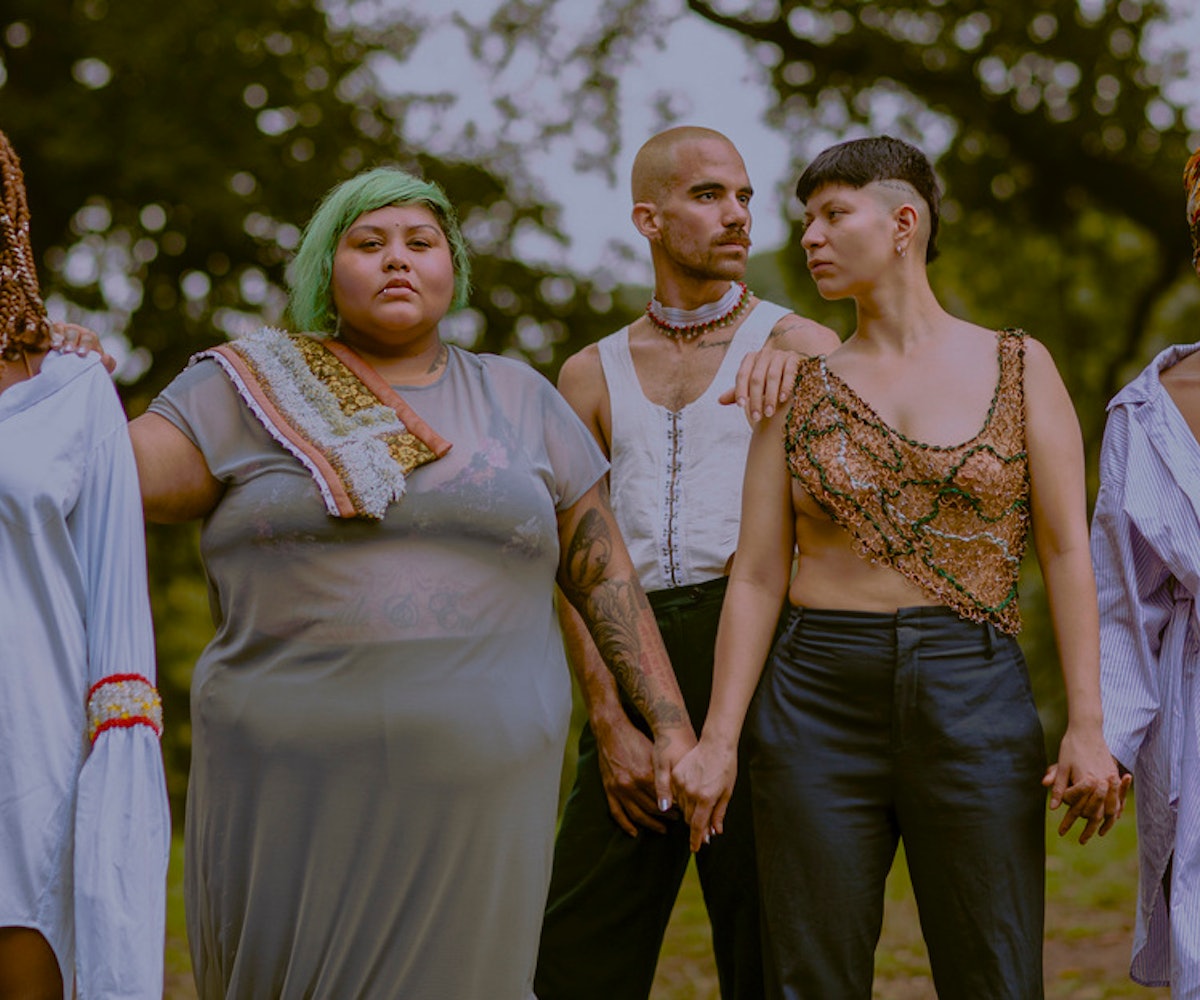 In a new visual essay "Black, Brown, Other," artist Dominique Wynne has tapped four people of color, two of whom are also queer, to talk about their feelings of alienation, and how that feeling impacts their lives. The idea came from something that happened in Wynne's life: She was promoted at her job, only to realize that no one else in her company looked like her. As a Black woman, she tells me, "I was feeling out of place and alienated in my identity, and just my existence, and, most importantly, I felt like I didn't have anybody to talk about it with." That feeling of isolation, she knows, is something that all queer people and all people of color—and definitely those with intersecting identities—have felt many times. "I wanted to reach out to people of color and queer people and anyone who I thought might've felt like an 'other,' and get their experiences as well."

The result is an all-encompassing look at how otherness is forced upon minorities by people in positions of relative power, whether it be institutional discrimination or microaggressions. Wynne spent hours interviewing her four subjects about how they feel alienated because of their identities, and how this hurts them both professionally and personally; all of them feel constantly misunderstood by people who don't look like them.

By opening their conversations to a wider audience, Wynne hopes to show the individual effects of institutional inequalities and to offer all people an understanding of how it feels to be alienated. "I wanted to give non-people of color, non-queer people a look into a candid conversation," she tells me. "Those people will never get an opportunity to sit in on a conversation like that in their lives usually."

She got her subjects to open up about the complexities of their existence in a way that wouldn't have been able to happen were she not also a queer person of color. "It's so different when marginalized people talk to each other. We can talk so frankly. We can say what we want without fear, because we understand each other. It's this non-verbal, I feel you. I get you," she says. "And I thought that it would be beneficial for people who would never get that otherwise to be able to take a look at it, because it's through candid talk and really not filtering yourself and your emotions and your struggles.

Two of Wynne's subjects are white-passing, which offers its own advantages and disadvantages. "I have a lot of white-passing friends who have told me on occasion that being white-passing is something that's hard for them, and makes it hard for them to infiltrate POC spaces just based on the way they look," she says, pointing out the unique disadvantage of being unable to be immediately accepted by the people with whom you may feel most closely related. "I really wanted to challenge both people of color and non-people of color to see the ways in which we can alienate others, even if it's unintentional."

Yess, one of the subjects, notes that they have an accent and are therefore only able to pass as white when they are silent. In their portion of the essay, "they talk about having that privilege taken away as soon as they speak." Says Wynne, "That's the perfect example of how, no matter what, even if you are white-passing, as soon as someone who is not a POC sees you as an 'other,' that unconscious bias just switches back on. All of a sudden you are no longer blending in."

The same goes for people who pass as cisgender and straight but aren't, says Wynne. Two of the subjects use they/them pronouns, but most people don't automatically assume it. And, Wynne notes, something similar could be said about bisexual people who are in heterosexual-assumed relationships. As a bisexual person in a relationship with another woman myself, I am also acutely aware of how queer people treat me differently than they would were I dating a man. Friends and colleagues who identify as bisexual but are labeled "straight" by their peers get so discouraged by the constant misidentification that they stop their constant correcting, and don't speak up about it, because they've been led to think that they can't. Wynne describes the dueling ways in which bisexual people are treated:

One is, now that you're seen as being in a heterosexual relationship, you're protected under heteronormativity. But you also are outcast, or at least I think that bisexual women can be outcasts when in heteronormative relationships, because it kind of invalidates their sexuality and themselves as a queer person. It's kind of like you no longer fit into the queer space because you're dating a man even though you yourself are attracted to women.

It's often unintentional, the way others force alienation on us, and comes from a place of not understanding. "I think that unintentional mindset comes from never having experienced something like people crossing the street when you walk by," she says. "It's very hard to force the hand of someone who's never felt alienated or who has never been challenged to even have discussions with people who have." But by reading the narratives of these four individuals, it makes it harder to shrug it off, and more immediate and pressing an issue to change.

Wynne doesn't have a set answer for how to stop this alienation from occurring, just that it needs to happen. "I'm not sure how to do it, and I"m also not sure that minorities are responsible for showing allies how to stop the behavior," she tells me. Thinking back on all the times I've been forced to explain my sexuality and its validity, I wholeheartedly agreed. It's something that needs to be taken up by allies themselves, she offers: "There is nothing more powerful than someone who looks like you telling you what you did wrong. Because a lot of the times, minorities are immediately invalidated."

In so many instances, too, people who don't deal with these problems get overwhelmed, and so avoid dealing with the situation entirely. We need to put changes in place on a small scale to make large-scale change. "People rely on broad terms and broad ways of change because it doesn't really hold them accountable for doing anything," she says. "I think that relying on broad solutions is really just a cop-out to not really doing anything at all."

What we should be doing, Wynne says, is "celebrating the differences and strengths without having to be silent and bear the burden of being different all the time. I want queer people and people of color to see this and feel heard, to nod along, and to join us in the exhale of not being silent anymore. And to know that I'm in their corner."