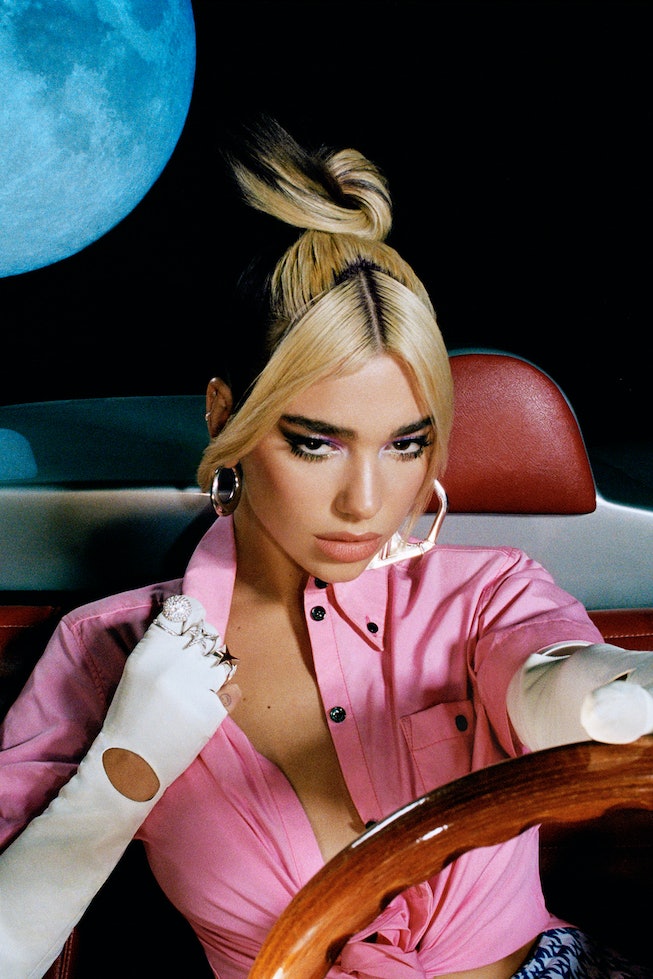 It takes guts to be a pop star and Dua Lipa had them from the very beginning. "Genesis," the opening track of the British-Kosovan's self-titled debut album, inserts herself into the myth of creation, one of the oldest and most culturally consequential stories in history. An audacious move usually reserved for the Madonnas and Gagas of the world, it was that kind of chutzpah that made Dua Lipa (and Dua Lipa) so enjoyable. Here was a star who could collaborate with Sean Paul and K-Pop stars BLACKPINK without becoming another anonymous voice, whose debut album not only spawned a handful of genuine hits, including the ubiquitous "New Rules," but also became the most-streamed record by any woman artist in 2017. Conceptually, her music felt ahead of the curve too, eschewing the cynical girl boss antics of her peers in favor of a warmer outlook that seemed to gesture toward sisterhood and collectivism. Anonymous pop stars are a dime-a-dozen in the U.K., but Lipa managed to stand out.

Naturally, Lipa spent the intervening years between her debut and its follow-up, Future Nostalgia, flexing her newfound star power and accruing more along the way. In 2019, she won two Grammys, and racked up a couple more hits through high-profile collaborations with Calvin Harris ("One Kiss") and Mark Ronson and Diplo's Silk City project ("Electricity").

The success of those two songs — singles from marquee producers that sound, more than anything, like Dua Lipa singles — felt like a harbinger of things to come. If Dua Lipa was an impressive first look, then Future Nostalgia was to be her coronation in the style of Katy Perry's Teenage Dream or Lady Gaga's Born This Way, sophomore records that took their respective stars to supernova status.

As it turns out, Future Nostalgia is functionally more black hole than supernova. Ostensibly a collection designed to "change the game," as Lipa half-raps on the record's title track, Future Nostalgia feels more like a throwback to the days when it was acceptable for pop records to mainly comprise filler.

With its fusion of pop futurism and '80s-inspired sonics, Future Nostalgia builds on the foundations of "Electricity" and "One Kiss," drawing much of its aesthetic from UK house and garage. Animated by meaty, rumbling bass lines and four-to-the-floor beats, these songs nod to Kylie Minogue and "Murder on the Dance Floor" — sounds due for a revival. And it worked: Lead single "Don't Start Now" is one of the best pop singles in a long time, a "Don't Call Me Baby" update that harnesses all the defiance, cheek, and personality of Dua Lipa's best tracks and repackages them with new finesse. But the rest of Future Nostalgia largely falls victim to bet-hedging, refusing to tread as deep into the sound of its lead single. "Hallucinate," a euphoric, otherworldly club-closing anthem, is one of the few songs on the record that comes close to the thrill of "Don't Start Now," but something's missing. Even during its headrush of a chorus, the emotional payoff feels akin to that of surveying a party through an Instagram Story: You know how it must feel in person, but it doesn't change the fact that you're not there yourself.

This feeling persists throughout the album. Funky highlight "Levitating" rides an appealing, undulating synth and snippets of Daft Punk-style vocoder in pursuit of its love-as-spaceship metaphor, but fades from memory as soon as the next song begins to play. "Break My Heart" manages to take one of pop's more iconic bass lines — the hugely memorable riff from INXS's "Need You Tonight" — and smother it into anonymity by pairing it with the same insipid beat that seems to populate much of the rest of the record. These aren't bad songs, just unmemorable ones, which, in pop, almost feels like a greater sin. One senses that the problem might be a clash of sensibilities: The sound Lipa is mining feels uniquely and specifically British but has been toned down so that it scans more like generic dance-pop than intentional homage. In pursuit of an American audience, it seems that Lipa has sanded down the edges that made her so endearing to begin with.

The vision and intent that animated Dua Lipa is nowhere to be found here. Closing track "Boys Will Be Boys" is a one-size-fits-all feminist anthem, its bizarre chorus of "boys will be boys / but girls will be women" a sharp 180-degree-turn from its quietly profound, sisterhood-invoking predecessor "New Rules." "If you're offended by this song, you're clearly doing something wrong," Lipa sings on the song's soaring bridge. It feels like the people most likely to be offended by "Boys Will Be Boys" are those who find its sloganeering and pandering universality insultingly lowest-common-denominator, as opposed to misogynists or chauvinists.

Occasionally, the sparks Lipa created on her debut album make themselves apparent, reminding a listener what could have been. The paranoid disco of "Love Again" is a more successful pastiche than what appears on the rest of the record, but perhaps best is "Good in Bed," a Lily Allen-style kiss-off that finds Lipa flaunting all the wit and personality that made her such an appealing star to begin with.

That Future Nostalgia arrived with a fizzle, as opposed to a bang, is not, and should not be, a death sentence. "Don't Start Now" and the rest of Lipa's enviable back-catalogue of hits already serve as a standard-bearing canon for the small cluster of mainstream pop artists not making trap-inspired music. Realistically, Future Nostalgia is the victim of expectations set too high and a pop market wanting every angle from a single artist. From the beginning, though, Lipa's X-factor was her workhorse persistence and ability to make low-concept music seem vital and endearing. "Chang[ing] the game" is a lofty goal held by all-too-many pop stars who burn bright and fast. Playing the game in front of you, on the other hand, takes real guts.