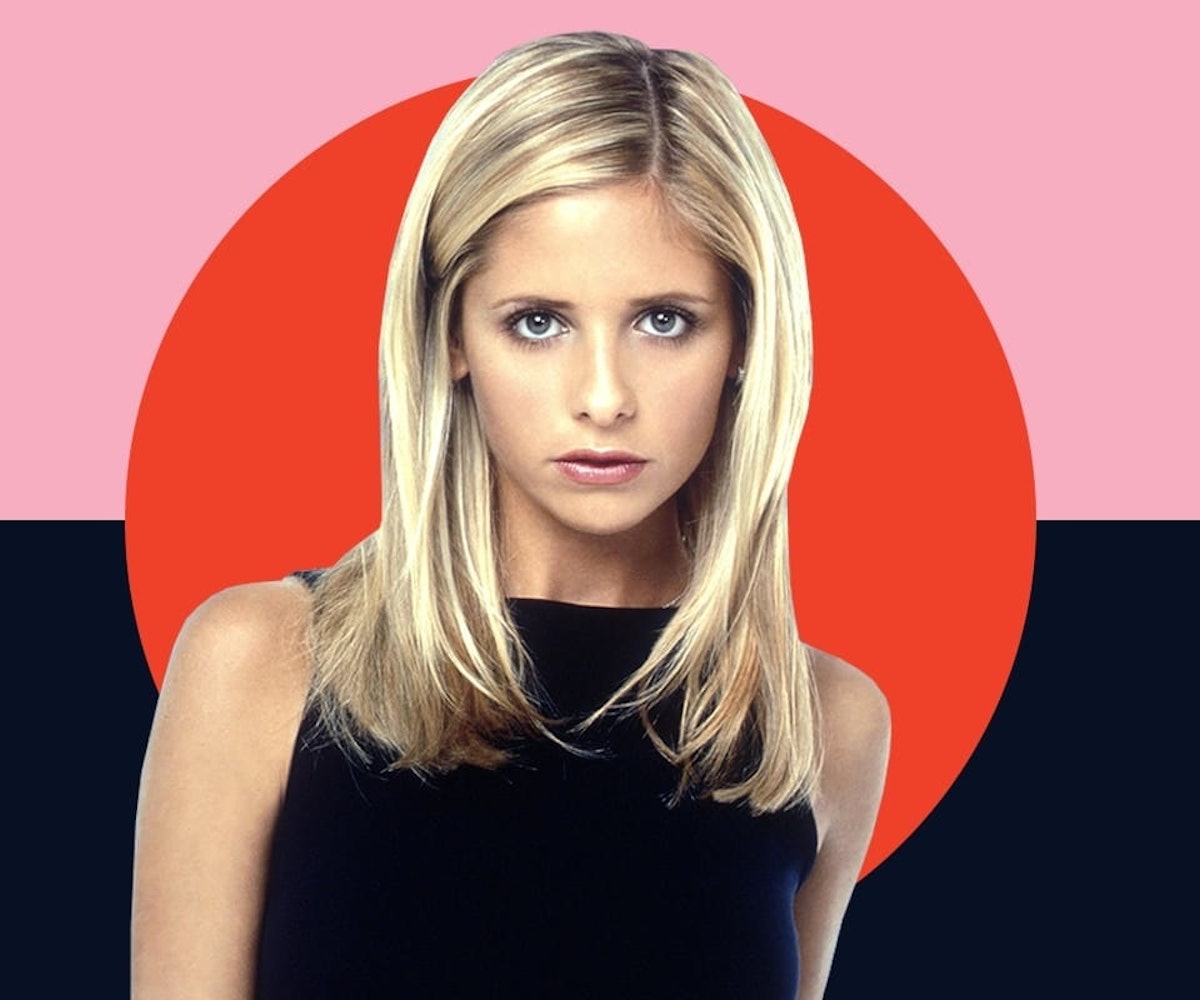 "The hardest thing in this world is to live in it. Be brave. Live. For me."—Buffy Summers, Buffy the Vampire Slayer

I got out of the hospital after endometriosis surgery almost three weeks ago, but life hasn't gotten easier yet. I still have to take painkillers—which barely work against this type of abdominal pain—almost every day, though neither I nor the surgeon expected it at this point. All he said was: "It can take a while when you've had pain for this long."

I have pain all days, but I can barely stand it on those painkiller days. It's not my first surgery, but the despair is fresh. I look forward to when I will cry only once a day. When I try to take stock of my situation and of what I will be required to do and decide about my future next, I boil over until everything feels hopeless and meaningless. My mind turns into a hysterical, red-faced toddler; wailing mouth, slobber falling, stubby limbs thrashing, tears-spilling, wounded eyes staring at me. I try to soothe it, repeat that it's okay to be sad and it's going to be alright, though all I seem to be capable of is to refrain from hitting the screaming toddler I've become. I turn away to look out the window, clench my teeth and wait.

One day, I wake up in pain and abandon my desk to close the curtains again and watch the last episodes of the third season of The Originals. Spoiler alert: Almost everyone dies. The Vampire Diaries and The Originals share the same supernatural universe. The shows have beautiful production design and increasingly boast a pleasingly diverse cast, except of course that everyone is slim, young, and gorgeous. Both shows are at times clogged with silly amounts of expository dialogue. Everyone is constantly dying and coming back from the dead.

Supernatural teen TV shows have always held a draw for me. I can't quite explain it and don't usually tell people I watch them. It's a little embarrassing for an adult with an MFA degree, who is supposedly busy with serious literature. I could certainly defend it and argue that there isn't enough art that focuses on the female experience, and so of course art that caters to a young, female audience gets an inordinate amount of shit and triggers a conspicuous amount of anger and derision. But as a very petite and soft-spoken woman, I've had my fill of people not taking me seriously. So, I don't.

As I've been sick again, I keep coming back to these shows. In part, it's because I like to watch shows with young girls as main characters, but also, nobody on these shows has babies—except the occasional mysterious infant whose existence breaks all the rules of the universe and who needs to be protected from a thousand murderers. Someone whose childlessness isn't entirely by choice can very quickly have their fill of that everyday self-satisfied and long-suffering parenthood so often seen in media.

Another thing is, nobody on these shows has a job—being their haughty, sexy, murderous selves and dealing with the ensuing drama is enough work. This means they can keep me company in the daytime, unlike all of my friends with their nine-to-fives. These characters' lives also reflect my own in combining high drama with the mundane. We're fighting for our lives, some of the time, but we're also padding around our apartments with the curtains drawn, wondering what to do with the daylight hours, while everyone else is outside in the world, having a life.

Even while battling my illness, I sometimes feel strong, and start to imagine I could accomplish anything I want despite my condition; it can be hard to remember why I live this vaguely parasitic existence—until I get outside among regular people. How loudly and copiously they talk! How ruddy, large, and sunlit they are! While I have strengths, my frailties are specific and impossible to get around no matter what I do. I peer dizzily at people like some sort of night creature, unsure how to read them or pass as one of them, trying to have conversations but also dodge questions about what I do for work.

When I was 19 and living at home, waiting for my life to start, I would come home late every night and watch reruns of Buffy the Vampire Slayer on the small TV in the kitchen so as not to wake my parents. I was so caught up in it I would leave my friends in bars in order not to miss episodes, though I'd seen most of them before.

It is well-written and funny and deals with teenage angst better than most shows, with the additional raised stakes of the world constantly needing to be saved. Later, I also realized that part of what made the show resonate so loudly for me was that Buffy, too, kind of has an invisible illness. She has to struggle in secret as The Chosen One. She feels a lot of pain that the rest of the world cannot see. She is fighting monsters and hideous things and is always in mortal danger, performing secret heroics that look like nothing to the rest of the world. All they can see is that she's doing a bad job of being a regular person.

These shows also deal with death, in that a lot of dying happens. Giant subjects like what happens after death are solved in vague and malleable ways. There is an "Other Side," but it's not for everyone, and it can be destroyed. You die, but then you come back if your friends need you badly enough, to deliver messages and die again. You keep your agenda, your enemies, and your outfits—even though you are dead.

An episode or two after a major catastrophe, the characters are more or less back to normal again. There is too little vomiting in art. But it's still strangely soothing for me to be in the grief space so many episodes linger in. People in these shows are always in peril, in a position to display courage, and being pushed to their limits. There's always a new threat and a new loss in a way that feels a little too familiar for me after these past few years of getting more and more bad news and spending more and more time in hospitals.

I recognize that shadowy atmosphere that exists after something has gone really wrong, but you still need to make decisions and fight for your life. I also recognize all those little, well-written speeches about choosing life, having said them to myself. Perhaps what I find most alluring, though, is the concept of having a bunch of people who understand that you live in a half-lit world of hidden dangers and tragedies, even though you look completely normal.

These shows all explore weakness and strength. There are always monologues about how powerless humans are, delivered by arrogant, practically invincible vampires. The point the shows seem to make is that the unbearable vulnerability of human lives is what gives our lives value, and even makes them desirable.

In real life, our vulnerability seems to be seen to be only a weakness; any lack of clarity about the future is a sign of imminent failure. Most people around me have lives in which they set a plan based on what they want, and then simply see it through. They don't think of their bodies except to consider that they will age painlessly. They hear me explain the basic facts of my life and think, Wow, that's a thing? Chronic pain?

They are shocked when they have a health scare and feel moved to write to the papers about the quality of the care they received, feeling sure none of their readers will have ever heard of what they are about to describe: "Hey, you guys, I discovered a thing!" They can afford the luxury of feeling revolted at the hospital smells. They write about how glad they are to have their health, after it was revealed that their specific scare, of course, was only a small easily fixed thing and this isn't their problem.

Because that would surely be a different kind of feeling.

What happens when it does concern you? When it's fucking on, and it's you versus it? When it's not happening some other day, you are there, in the waiting room, the ER, or the hospital bed, and you can't leave. It's you and the rest of the losers waiting there in the line at the hospital blood lab. Your shit on the line, your body in the MRI machine, your little skin meat sack on the operating table being put under to be cut open, probed, and rearranged. You fighting for your life in dull rooms with the TV always on.

These TV shows, wherein enemies are fought straightforwardly, head-on, with fists and fangs, soothe me as I remain in this liminal space where I need to lie on the couch and watch TV and cry and recover, yet again. Run through the corridors of my old trauma, Möbius strip-style. Find a way to make choices such as whether to aim for pain management or retain the faint possibility of future pregnancy. The body will run out. Blah blah blah, we are all human beings, all of us limited. Can I accept the imperfections of the brief phenomenon of being alive? Do I need it to be a cherry tree in peak bloom, before a single petal has fallen? Good luck with that.

It doesn't seem fair that a situation of being seriously ill, exhausted, and struggling to get through the day should require that I also ascend to some higher level of egoless, non-clutching being who is completely fine with the perimeters of a human life. Nobody else seems to have to.

When having conversations about my health problems, I sometimes feel like the other person is wondering, past a certain point, why I even bother? Wouldn't it be easier to be dead? My own stack of misfortunes, though I know I'm lucky in some ways too, is getting to be so large that it seems somehow… unlikely. Like being hit by lightning several times.

It's easier to not ever talk about it. But I also need to tell, to be seen, and recognized. I need allies.

Probably, what I love most of all about all these vampire shows' excesses is that they indicate that it's possible to continue on—that just because some weird shit happened to you, you're not done. You can still be interesting and gorgeous. Even if you came back from the dead several times and were tortured and shunned by your community and had to flee. Even if you had to become a different kind of being and kill to stay alive; you can come back, ready to bring your enemies down.