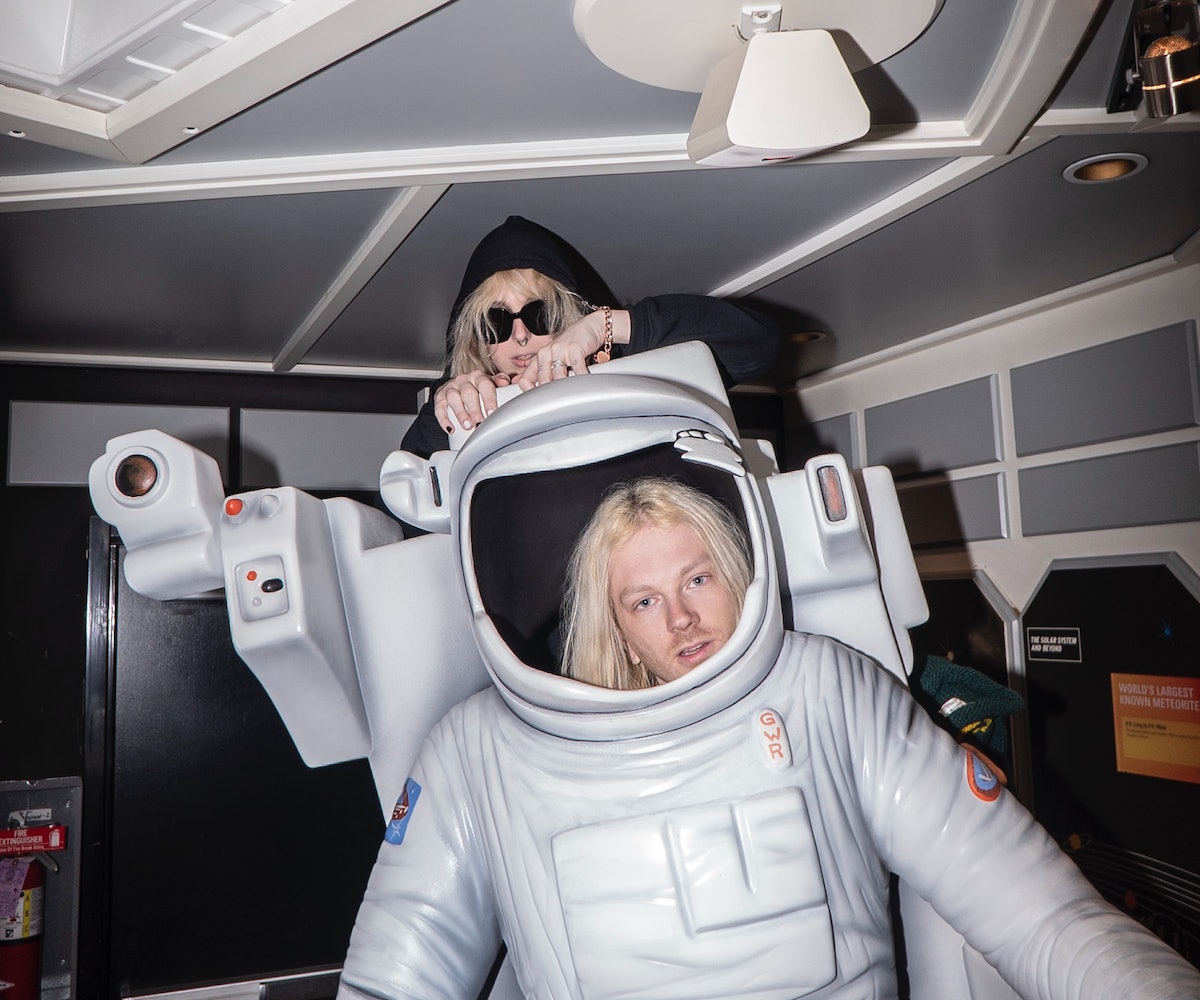 Ever since 100 gecs released their debut album, 1000 gecs, in May 2019, a common refrain among critics and fans has been how brain-breakingly futuristic it is. It’s been exhaustively characterized as an overstimulating slurry of genres and moods that simultaneously captures the 5G speed of our contemporary culture while providing a glimpse at how pop music might sound in 2040; Pitchfork called the album by and for “denizens of a perpetually logged-on generation.” It was a soundtrack for a world that could barely keep up with the present, constructed by two musical clairvoyants who were creating in response to a timeline that hasn’t even happened yet.

All of those characterizations felt accurate even just six months ago, but if we’re being consistent with our metaphors about the accelerated tempo of pop culture, then we’ve already scrobbled up to the era that 100 gecs’ music embodies. In a year, the duo of Laura Les and Dylan Brady have become so popular and noticeably influential on a whole cottage industry of artists blending bubblegum bass, pop-punk, dubstep, hip-hop, metal, and more — even the most radical moves on 1000 gecs sound strangely practical today. 100 gecs are no longer just a shooting star breaking orbit, but the very planet outsider pop revolves around.

The best songs on the album are the ones that employ gecs’ lawless approach to flipping the script on any given genre. British producer Danny L Harle turns the sweet love tune “gec 2 Ü” into an ecstatic hardbass thumper, while PC Music leader A.G. Cook converts the sugary “money machine” into something ambient and then more snarling. Charli XCX producer Umru flips the sprightly “ringtone”—arguably gecs’ most accessible song—into an angelic ballad that splits the difference between dream-pop and pop-punk. This sprawling range is just achieved across the tracks tinkering with production; the remixes that add vocals are even wackier and often more thrilling.

The already-trancy “xXXi_wud_nvrstøp_ÜXXx” gets an even trancier remix by the tongue-trilling Estonian rapper Tommy Cash and UK pop singer Hannah Diamond. Cash’s larger than life personality sounds at home here, pogoing atop a strobe-like beat as Diamond channels her best Cascada impersonation on the hook. It’s a truly skyscraping highlight and likely the best vocal pairing on the whole record, but it’s the following two most marquee-posse cuts that will undoubtedly go down as standouts.

100 gecs are no longer just a shooting star breaking orbit, but the very planet outsider pop revolves around.

The “ringtone” remix featuring Charli XCX, Rico Nasty, and Kero Kero Bonito remains the sentient moodboard for Twitter users with anime avatars who Tweet daily about Caroline Polachek. It sees Rico Nasty pulling off a convincing emo-rap croon that outmatches Charli XCX’s hook, and its very existence is proof that 100 gecs are the missing link between these seemingly disparate styles of pop music.

Meanwhile the “hand crushed by a mallet” remix which features Fall Out Boy, Craig Owens, and Nicole Dollanganger is also incredibly exciting, even if a FOB collaboration was always conceivable (while it certainly catered to the world of contemporary pop, 1000 gecs was also a dog whistle for former scene kids who thought Myspace metalcore and auto-tuned pop-punk acts like Hellogoodbye and Breathe Carolina would be permanently memory-holed). Craig Owens, on the other hand, is such a weirdly specific curveball into late aughts post-hardcore that it’s somehow more mind-blowing than nabbing Fall Out Boy. Goth-pop weirdo Nicole Dollanganger doesn’t have much of a presence on the song, and though the remix itself isn’t all that revelatory, the fact that it happened is satisfying in its own right.

Other highlights include Black Dresses’ screech-laden trap-ification of “745 sticky” and the interlude “gecgecgec” becoming a full-on rap song thanks to Lil West and Tony Velour, but the bloat settles in at 99jakes’ remix of “xXXi_wud_nvrstøp_ÜXXx.” It feels redundant after Cash and Diamond rivaled the original with their take, the same as how Dorian Electra’s version of “gec 2 Ü” falls flat compared to Harle’s speaker-shattering rendition. And sadly, new tunes “Came to My Show” and “Toothless”, which both originally debuted at a Minecraft festival in 2019, feel like 1000 gecs b-sides with hooks that leave a lot to be desired.

Unlike its predecessor, 1000 gecs & the Tree of Clues doesn’t build an entirely new world of pop music or time-travel forward into uncharted lands — but it didn’t really need to. Instead, its existence as a monument to 100 gecs’ looming presence over so many different music scenes, is proof that their diverse influences aren’t just theoretical, but complementary in practice as well.