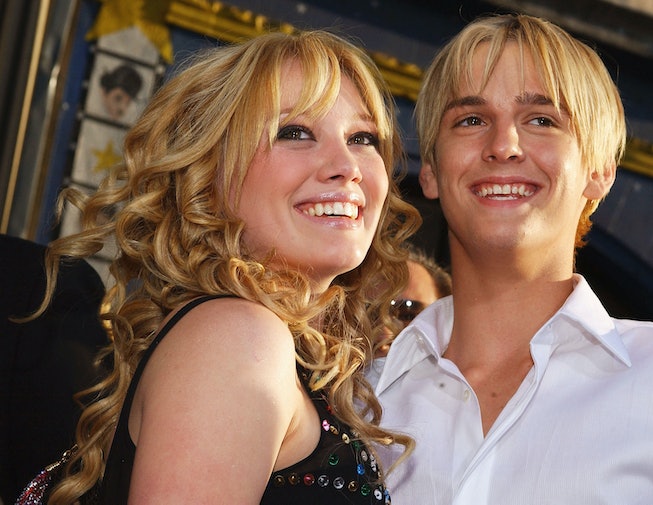 On Saturday, November 5th, former child star Aaron Carter was found dead at the age of 34. Since then, tributes for the Aaron’s Party and LØVË singer have continued to pour out from those who knew and loved him.

Carter rose to fame as a young pop star in the 90s following the release of his self-titled debut in 1997. He went on to have hits like “I Want Candy” and “Aaron’s Party,” and was an opening act for his brother Nick Carter’s band, the Backstreet Boys. Carter also appeared on Disney’s Lizzie McGuire, dating the show’s star, Hilary Duff, when the two were in their teens for a few years.

Duff shared an Instagram post over the weekend in tribute to Carter, writing, “For Aaron- I’m deeply sorry that life was so hard for you and that you had to struggle in-front of the whole world. You had a charm that was absolutely effervescent...boy did my teenage self love you deeply.”

Songwriting legend Diane Warren shared a note on Twitter, writing, “Fame at a young age is often more a curse than a blessing and Surviving it is not easy. RIP Aaron Carter”

Nick Carter shared several photos of the two brothers when they were younger, along with a lengthy caption. “My heart has been broken today,” the elder Carter brother wrote. “Even though my brother and I have had a complicated relationship, my love for him has never ever faded. I have always held on to the hope, that he would somehow, someday want to walk a healthy path and eventually find the help that he so desperately needed.

“Sometimes we want to blame someone or something for a loss. But the truth is that addiction and mental illness is the real villain here.”

Nick wrote that he will “miss my brother more than anyone will ever know” and that Aaron would “get a chance to finally have some peace you could never find here on Earth … God, please take care of my baby brother.”