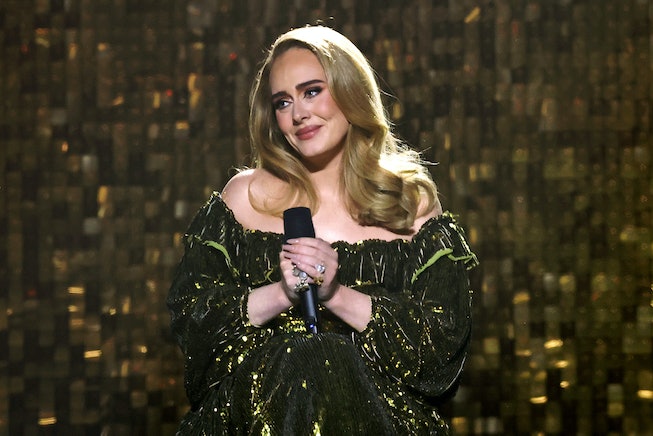 Adele made her return to the stage since controversially cancelling her Las Vegas Residency at the 2022 BRIT Awards on Tuesday evening. Wearing a luxurious gold off-the-shoulder gown and seated atop a piano in an understated stage setup accompanied only by her band and back-up singers, Adele delivered a glorious rendition of album favorite “I Drink Wine” that was anything but understated.

It was one of the rare live performances Adele has given since 30 was released at the end of 2021, only performing its songs for the television specials Adele: One Night Only and the U.K.’s An Audience With Adele, as well as a performance of “Easy On Me” at the NRJ Awards.

Her now-postponed run in Las Vegas was going to mark her first series of live shows since her last album cycle and tour. Originally scheduled to kick off January 21 at the renowned Colosseum Theatre at Caesar’s Palace, her residency was later postponed due to “Covid delays,” which the star tearfully announced in a video that was posted 24 hours before the first show was set to begin.

Her last-minute decision to cancel the show has since become a point of controversy. A PageSix article published after the cancellation alleged that Adele’s team was a “complete nightmare” to work with during the preparation for the three-month residency, as they demanded to have the venue’s sound and video system replaced with their own, among other requests.

Still, even with the public’s sway not entirely in her favor, Adele made a triumphant return at the BRITs stage on Tuesday — and not solely with her performance. The star also swept the award show’s general categories, including Artist of the Year, Album of the Year with 30, and British Song of the Year with “Easy On Me,” saying in her speech for Song of the Year, “I can’t believe that a piano ballad won against that many bangers.”

Later that evening, Adele dedicated her Album of the Year trophy to her son, Angelo, as well as ex-husband Simon Konecki.

“I’d like to dedicate this award to my son, and to Simon, his dad,” she said during her speech. “This album was all of our journey, not just mine, and I’m very proud of myself for sticking to my guns and putting out an album that was about something so personal to me. Cause not many people do stuff like that anymore. And my son has been so gracious and kind and patient with me over the last couple of years. And it’s for him.”

Beyond her wins, Adele also dazzled throughout the night and on the red-carpet in a custom black velvet Armani Privé gown, and, to many sharp-eyed viewers’ surprise, a massive rock on her left hand that’s new fueling engagement rumors to her current beau, sports agent Rich Paul. The singer hasn’t made any personal announcements yet, though given how tightly under-wraps she keeps her private life, it’s possible she never will — and the world will find out when she decides to release her next album.

See more of the best-dressed at the 2022 BRIT Awards here.