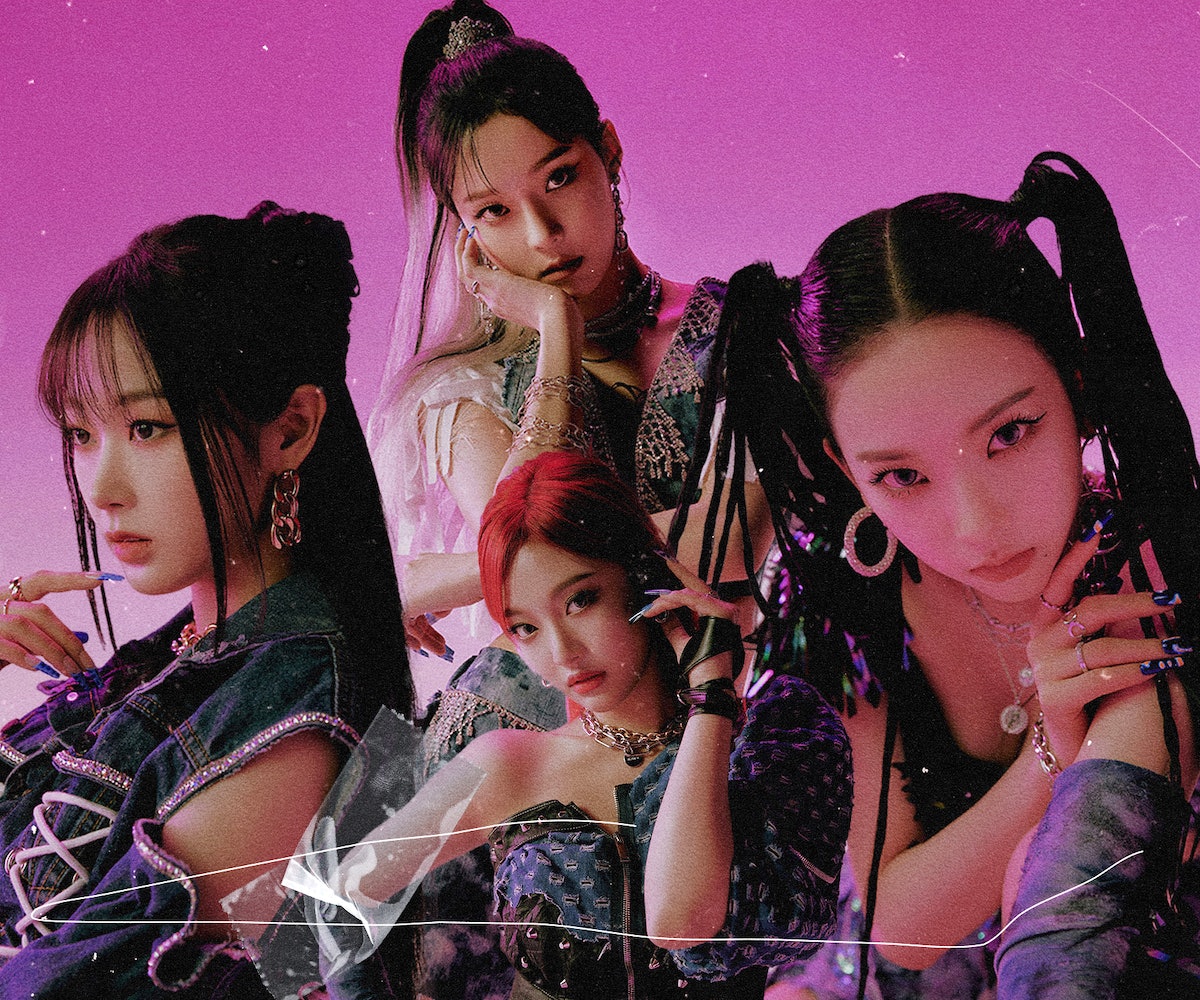 Giselle is having a hard time concentrating on her lecture. In her defense, don’t we all find social media more interesting than class? Plus, as one of the many people who know their æs — virtual avatars fashioned out of the data we put on the internet — intimately, she is well versed on the subject. Her own, in fact, known popularly as æ-Giselle, is sitting in the back of the class, clad in a nondescript hoodie and being as truant as Giselle, as they both work on lyrics through a shared tablet.

Just as the holographic professor dives into the explanation of how æs are a part of ourselves, he glitches. In the back, æ-Giselle is frozen. As his hologram sputters and stutters, Giselle hears a pen clatter to the floor. When she turns around, her avatar is gone.

If this sounds like the beginning of a sci-fi movie, you're not far off. This is aespa’s first chapter of lore, K-pop's first group with their own AI avatars, known as the æs. As its members — Karina, Giselle, Winter, and Ningning — navigate the real world, their AI counterparts — æ-Karina, æ-Giselle, æ-Winter, and æ-Ningning — hold down the fort in the virtual world, being friends, companions, and support systems to the actual members. As is tradition with acts on SM Entertainment's roster, there are cosmic proportions of world-building around the act. The members of aespa, it turns out, have a large role to play in the freshly minted fictional universe created by their label — a confluence of science fiction, technology, and music called 'SM Culture Universe.' (It may even be getting its own Hollywood movie soon.)

The primer goes like this: in aespa's world, people and their æs coexist with each other. The æs belong to a virtual world called the FLAT, but a "navigator" called NÆVIS opened a P.O.S (Portal of Soul) that enabled the æs to meet their real-world counterparts, a process known as SYNK. They take classes with you, watch your back in a game, and even share the spoils of being an internet celebrity. But every fairy tale, however futuristic, needs a good old-fashioned villain, and theirs is the Black Mamba, a serpentine entity that aims to sever the connection between the real world and the FLAT. Somehow, the future of the world rests upon the shoulders of these eight — not four — members.

"We are an eight-piece group," the group's leader, Karina, clarified in a press conference for their new single “Next Level.” "We took lessons for a long time to fully understand our concept and universe. Now, we know who we are."

Even before the internet, virtual idols had been a mainstay on pop-culture radars. The earliest recorded accounts take the word “virtual” literally, with animated shows like Alvin and The Chipmunks, The Archies, and Josie and The Pussycats releasing music outside of their shows performed by the titular characters. In the 1980s, Japan created fictional idol singer Lynn Minmay from the Macross anime franchise whose song “Do You Remember Love?” became an instant classic, spawning covers decades later.

In 1995 came Kyoko Date, the first real AI idol. It was through her that the template for 21st century virtual idols like Hatsune Miku and Kizuna AI was set. Fast forward to 2018, and the world met K/DA, a virtual girl group comprised of League of Legends characters. And in March 2021, right on the heels of aespa, Korean entertainment agency Pulse9 debuted the girl group Eternity, comprised of only AI-members.

In South Korea specifically, the influx of virtual idols comes hand-in-hand with the resurgence of the science fiction genre itself, one that’s reckoning with our position in the contemporary world.

"I think, especially now, with environmental issues and global warming and the pandemic, we tend to think more about what the future will look like," says Jeong Areum, assistant professor of Hhumanities and writing at the Sichuan University-Pittsburgh Institute. "I think AI can definitely expand the idea of what K-pop can look like in the future, what K-pop idols and artists can look like,” she says. “It will open up infinite collaborations and possibilities.”

Aespa's concept, however, goes beyond imbuing a caricature with voices and personality traits. As SM Entertainment's founder Lee Soo Man explained at last year's World Cultural Industry Forum, the æ-aespa are "independent beings as they have AI brains.”

“They also become friends and share information. They do things in their respective worlds and share what they do. They will also eventually be able to come and go to each other’s world,” he added, aka the digital world, where real members and virtual members would interact.

Since the æ-members trace their origin points to the real members’ personal data, finding middle ground with them wasn’t hard to do. “It wasn’t difficult to approach them since they have a lot of similar characteristics as us,” Ningning explains.

"Although æ-members were created based on our personal data, they have different appeals that make them unique on their own,” Karina adds. “So, even if we sing and dance the same part, I think it’ll look different because we each have our own distinct style that can be seen through our moves when we perform."

The sound of aespa’s newest single “Next Level” — a direct sequel to their explosive debut track “Black Mamba” — is as expansive as aespa's concept itself. As the group sings about taking the Black Mamba head on, the track hops from dance-pop to EDM to ‘90s-inspired hip-hop. It's a journey through genres as dizzying as the futuristic visuals it’s set against.

"Until [‘Next Level’], I had only heard about our worldview, but filming the video and being able to see it visually allowed me to truly immerse myself in the story and the character," Winter adds. "By gaining a deeper understanding of the entire concept, I was able to better express the lyrics in ‘Next Level’, as this song also pertains to our worldview as well."

The commitment to their concept is present down to the nitty-gritty of aespa's releases, which come jam-packed with references and terms that feel like a treasure hunt for clues to the storyline, slowly bringing other acts on the SM Entertainment roster into its mythical fold. Shortly after the release of “Black Mamba',” fans spotted aespa terms like “KWANGYA” and “KOSMO” cropping up in songs by NCT and EXO, prompting theories about how the acts could be connected.

“Until [‘Next Level’], I had only heard about our worldview, but filming the video and being able to see it visually allowed me to truly immerse myself in the story and the character.”

Some, however, have raised concerns about the impact AI idols would have on the industry, as well as the copyright and ethical conundrums they could pose.

That’s the biggest caveat. The joy of the K-pop experience is how human it is, where a group's journey — peppered with stories of hard work, determination, and disappointments — parallels the personal triumphs and failures for fans. For Jeong, it's an element that wins out over the perfect image of an idol. "You see what the idol likes, their quirks and habits and even their mistakes,” she says. “It completes the bigger picture. I think [fans] want the human touch."

As far as she’s concerned, she's on board for the SM Culture Universe — as are the rest of us. In the context of the past pandemic year, AI idols can expand the realms of entertainment as we know it. "It's not just about storytelling or concerts, but also all the other fan events that used to be in-person, like fan signs,” Jeong says. “They're now virtual. The whole idea of mediation is here to stay."

So are aespa, who are reveling in the success of their debut and looking forward to bigger, better things.

"I didn’t expect to receive this much love and attention, so it feels a little surreal, but of course, I am very grateful. After the positive response we received with our debut single ‘Black Mamba’, we did feel some pressure while preparing for ‘Next Level’, but I think this was only natural because the pressure came from our confidence in performing on stage," Karina reflects, adding that she's unwinding by watching Korean variety shows.

Ningning, who has a particular interest in American TV shows, often joins her, while Giselle is "either listening to music or singing songs while playing the guitar." And if you're wondering where Winter is, she's probably out for a walk — a very human activity.

"I love taking long walks alone. I find it very healing and it’s nice to spend some quality ‘me’ time,” she says. And well, don’t we all agree?