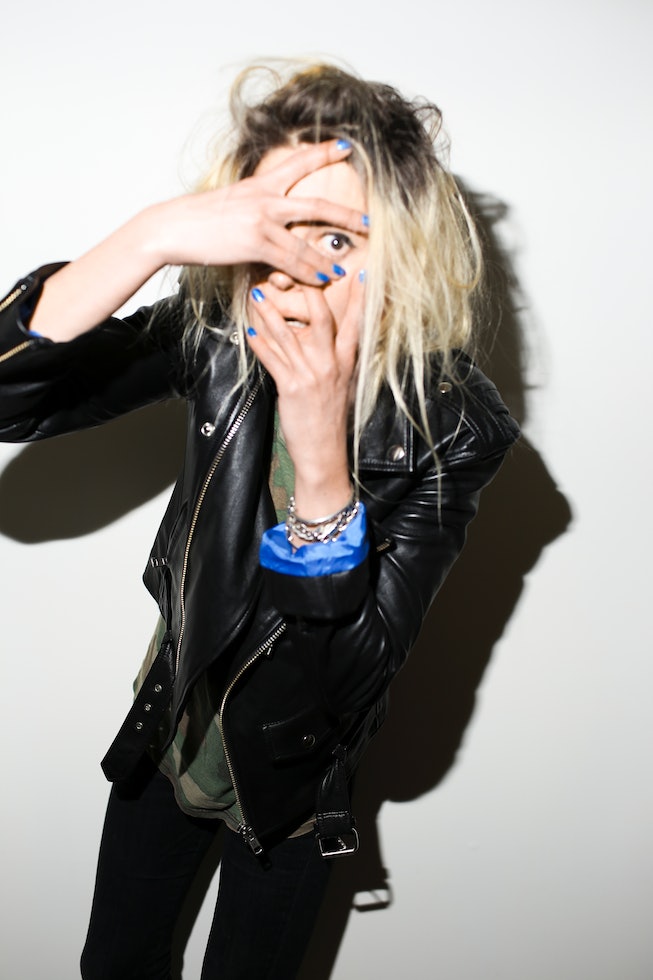 Bunkered down in her Nashville home, Alison Mosshart's mind is still racing. Nearly two decades into her prolific career, the Kills and Dead Weather singer, songwriter, painter, author, and general polymath has harnessed her natural creative energy into a rhythmic daily practice; she writes new songs the way others would keep a journal. It's daily, "quick, and voluminous," she says.

These days, discontent with just working on the next upcoming Kills album, Mosshart has been stretching her fingers in new directions. Her latest skill to tackle is video production, her impressive second effort on display in the striking video for her latest solo song, "It Ain't Water."

"I've just been making little films and things constantly," Mosshart says excitedly over the phone one recent Monday afternoon. "I love it, but I also have abandoned iMovie. After making two videos on it, I was like this program is totally awful."

After Facebook Watch's science fiction drama Sacred Lies asked Mosshart to record her first solo single "Rise," Mosshart figured she'd take the opportunity to release a complete 7-inch. Combing through her stash of songs, she landed on "It Ain't Water" — a smoldering confessional about drinking alone that she'd written about eight months prior — for the B-side, and shot the accompanying video on her own camera.

In stark black-and-white, the video features layered shots of Mosshart moving through her home, and of her singing along to the track. "It's sort of like watching yourself from the outside," she explains of the concept, perhaps unintentionally striking a phenomenon that also speaks to the surrealism of the current moment.

Below, Mosshart explains her process for shooting a music video at home, how she stays inspired and organized, and why, during quarantine, she's feeling like she's reverted back to her teenage self.

It sounds like you're sitting on a mountain of old songs and stuff that you've written, but haven't released. What prompts you to rifle through and revisit certain songs?

I'm prompted to rifle through when I need a certain kind of song for something. I write every day and really, 90 percent of the things I write, they don't need to be Kills songs. They're not screaming at me like, "I'm a Kills song" or a Dead Weather one. I write songs like people write in their journals. It's just kind of quick and voluminous. And I'm not saying it's all good, certainly. It's the practice of doing it, it's just part of my every day. So I have a lot of stuff and it's a wonderful moment when someone from film or TV or something... somebody needs something particular, and it's really nice when I can find a home for one of these things.

It's like having piles of paintings in my studio. People aren't going to see them all until someday someone says, "I really need a picture of a guy with 6,095 eyes. Do you have something like that?" I'll be like, "OK, hang on a second. Let me see."

The video you shot for "It Ain't Water" is very visceral. Did you have the concept in mind, or did it happen on the fly?

That one was incredibly conceptual because, again, there's so many limitations with that movie. I didn't have any idea how it would go the first time when I did "Rise." So I was kind of discovering problems constantly from not having made a plan first. But [this] one I thought about for a long time. The song itself is really about being alone, and drinking alone and kind of a mental shift that happens where you're sort of like your own best and worst company. It's sort of like watching yourself from the outside.

So I wanted that. And there's not much I can do; I've got a couple rooms to use and some outdoors, and I thought it would be really cool to have something that makes it look like I'm witnessing or watching myself because I'm singing the song and telling the story. I thought it would just be so beautiful to have literally two shots and shoot them and line them up and make them feel like you're watching.

As someone who struggles to even do one thing at a time, how do you stay organized and inspired to be working on so many projects at once?

I think that's the thing: I don't get bored because I'm working on so many things at once. The music and the art stuff, that's always been a really natural coupling because if I'm working on music and I get stuck, it's very common that I'll turn around and start painting right behind me, and I sort of circle like a vulture in the studio, pick things up and put them down, start this and start that, and kind of have a lot of things going. Even when I'm painting, I'm always painting a lot of paintings at once. I suppose that shifts, my brain feels most comfortable and relaxed when there's a lot of options.

Over the years working as an artist and getting into all of these other paths that have sprouted off of that, what is the biggest thing you've learned about yourself and your creative process?

I don't know. I love it all. I don't know what's the biggest thing I've learned. I feel like I'm learning more and more every single day. This quarantine thing has been so interesting because I've become obsessed with things like sculpture, which is not something I do really — and video making, which is not something that I've really done since I was a kid. It's almost like the stuff that I was really into in high school, in junior high, all those little different things that I would get up to for hours on end, that's kind of where my brain has reverted back to. That's on all levels, not only creative. It's like talking to a friend on the phone. Where we talk normally for like 15 minutes and now I'm like, "Hang on, three hours just passed."

Overall, I feel like a junior high school girl hiding in my room on my cell phone. Everything just boils down to this pre-internet, pre-crazy travel for a living. I'm back to my teenage self and it's really fun and it's kind of goofy and it's like, "Well, you can do whatever you want. There's no rules." It's very liberating. It can also be incredibly boring and I wish I could see everybody, but artistically it's liberating. I think people are going to come out with really wonderful things during this time because to be honest, there's nothing else to do.

What do you do when you have writer's block or are lacking inspiration?

Well, I don't force it and if I'm not feeling like it, then fine. That's me telling me that forcing it is going to be bad. I meditate, I do a lot of cool hobbies. I take walks, I take drives. It's important for me to be social sometimes because I really do suffer [when] I haven't seen anyone in five days or I haven't talked to anybody. And that's normal life. So, I don't know, just changing it up or watching a great documentary about a great artist, or reading. Sometimes if I'm trying to write-write, I can't write because I haven't looked at other words in a while. So I'll read a book. Whatever it is, if you're stuck on music, listen to a record or just do anything. I think the thing is just not beating yourself up. If it's not coming naturally, then there's usually a reason for that, that you need to work through, you know?

Is there anything else you want to try and master before the end of quarantine?

Well, I'm working on a Kills album right now with Jamie and I really want to get a bunch more songs that I feel are incredible to send to him during this time. With all the writing that I do, I can write 20 songs and then one of them I'm like, "That's the one that I need to send to him."

I'm also just so into this video thing. So [when my book] Car Ma comes back out, there is a spoken word record that's coming out from the book, but it's more of a really weird spoken word, because I started reading the book and I was like, "I can't. This is just boring. I don't want to even listen to me reading." So it's more like sound art for an adult, [with] voices and sound effects.

Immediately when I did it, I was like, "Oh man, these little snippets are cool little films." And so I've been working on those, and I'd love to make, I don't know, 15 of those. I think I have about six right now. So that's kind of more back to exploring the moving picture. Right now because I don't know what I'm doing, it's almost a surprise to me. Who knows.