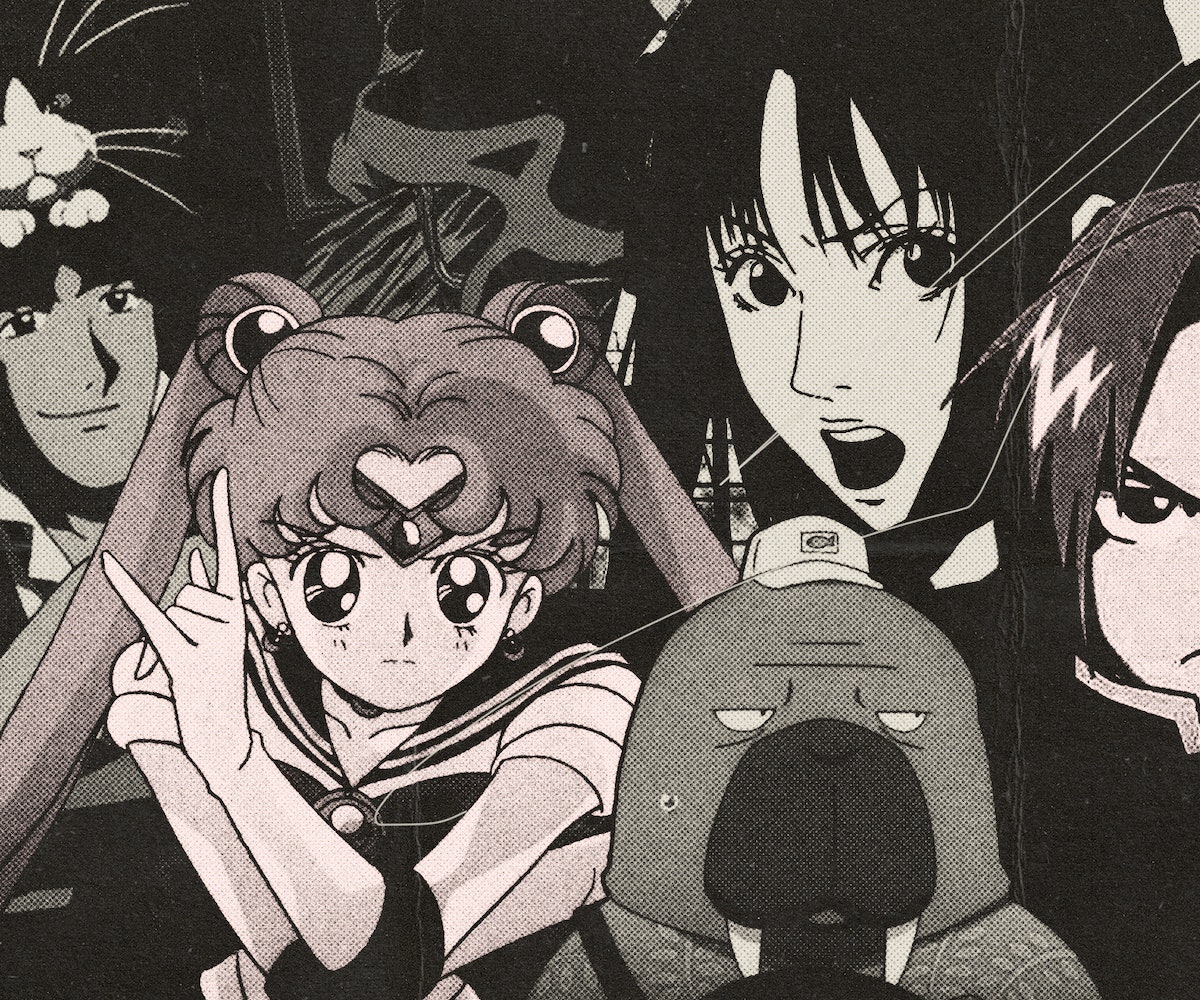 Growing up Asian American comes with certain perks: you enjoy a wider variety of snacks to bring to school, you usually grow up to be bilingual, and you get to celebrate traditional Asian holidays. In short, your entire world is automatically bigger because you don’t have limited access to just one single culture. It also means you don’t only have regular old American TV to watch — you also get to watch Asian TV. According to Geoff Thew from Mother’s Basement, I had a proper otaku upbringing (“otaku” being a Japanese term for someone with an obsessive interest in anime and manga). My childhood anime consumption was a combination of dubbed Sailor Moon VHS tapes and Dragon Ball on Toonami, before my older sister introduced me to subbed Inuyasha episodes pirated from LiveWire, and full-length episodes of Naruto, FullMetal Alchemist, and Bleach back in the good old days of early YouTube.

But if you aren’t Asian American, didn’t watch Toonami, or you didn’t have someone in your life who introduced you to some classic anime series early on, you might see the sudden popularization of anime as baffling. Which makes sense: Asian media is probably unlike anything you’ve ever seen before. That makes the first anime you watch very important — not only does it give you your first exposure to anime, but your first anime can help to guide you through understanding elements of an Asian story that you’ll need to acclimate to, in order to enjoy more anime. The wrong anime can seriously mess with your anime experience. So if you’re interested in checking out anime but don’t know where to start, consider this your crash course.

There are plenty of ways to categorize anime, but the most common way to categorize anime genres is by demographic. The two most major categories are called shonen (translating literally to young boy, roughly ages 12-18), and shojo (translating literally to young girl, roughly ages 12-18). Within those demographics are seinen (young man, ages 18 and above), and josei (young woman, ages 18 and above). Don’t let the age groups keep you from watching certain animes! Seinen/Josei stories will usually be more serious, and will explore more mature and deeper themes, like relationships, love, grief, and life purpose. By comparison, shonen/shojo tend to be more optimistic about serious themes, and include more comedic relief moments. In reality, the lines between shonen and seinen, or josei and shojo, can often get blurry, so don’t pay too much attention to what age range an anime is marketed for — the best anime have universal appeal! The real differences between shonen/seinen and shojo/josei are the storytelling traditions and patterns.

In the world of anime, the most popular genre is the shonen battle genre — and for good reason. According to Thew, there’s a specific sort of “storytelling tradition.” Many shonen battle stories are “modern extensions of all of the different retellings of The Monkey King in China and East Asia.” The Monkey King is a character from the novel Journey To The West, a legendary Chinese text written in the 16th century during the Ming Dynasty. A humorous adventure, satire, and extended allegory all wrapped into one novel, Journey To The West tells the story of the famous monk Xuanzang, and his journey to Central Asia and India to obtain sacred Buddhist sutras. Because the good monk is unable to protect himself, the Chinese Goddess of Mercy picks three disciples to protect him — the mischievous and powerful Sun Wukong (Monkey King), the loyal and lecherous Zhu Bajie (Pigsy), and the measured and diplomatic Sha Wujing (Friar Sandy). Each of the pilgrims has been personally picked by the Goddess of Mercy to protect Xuanzang and to redeem themselves for their past folly and sins. Elements of this story can be found distilled into modern shonen battle anime. “Dragon Ball is a literal re-telling of Journey to the West,” Thew points out. “In Jujutsu Kaisen, Satoru Gojo’s eye wrap can be seen as a modern interpretation of the Sun Wukong headband. Naruto is full of headbands (and Monkey King references)! It just permeates shonen, and it informs the kind of stories that just feel normal in that genre. Like, you’re in Japan and of course there are demons! It’s like how a Western audience isn’t going to bat an eye at a fantasy story with a dragon, or orcs, or vampires.” But while shonen anime’s most popular genre has roots in traditional Asian culture, the same cannot be said for shojo/josei animes.

Shojo/josei animes were invented in the early 20th century, but came into more significant prominence in the ‘50s and ‘60s, at a time when the anime and manga industry was predominantly male. Portrayals of young women in love were considered too taboo for the industry at the time, which reduced shojo mangas to stories about kidnapped young girls being rescued by a handsome young male character and then being returned to their families. But in the mid-1960s, it dawned on the manga industry that their female reader base was rising in age. They wouldn’t be able to hold their reader base’s interest with stories that they were outgrowing. Yoshiko Nishitani, one of the first women among the few female artists in the anime and manga industry, began to create comics about young teenagers experiencing first love, which more or less revolutionized the way manga and anime were being produced for girls and women. The anime industry also drew heavily from popular American TV dramas for their shojo/josei stories, exploring young loves and the general struggle of growing up. As the stories evolved and changed, the ‘90s marked a significant change in the shojo/josei narrative: the interest of self-fulfillment. Shojo/josei heroines were depicted as fighting to protect a community, and showed stories of female friendships and relationships being just as deep, if not as deep, as male friendships and relationships. Shojo/josei stories are riddled with tropes like love triangles, young girls and women forming long-lasting and meaningful friendships, and a constant theme of transformation (both magical or spiritual). Famous shojo/josei animes, like Sailor Moon, Paradise Kiss, and Nana, usually have all three.

If you like Insecure, try Nana! Like how Insecure follows Issa Dee through her journey to navigate adult love, friendships, and career woes, Nana chronicles the story of Nana Komatsu and Nana Osaki, two roommates who lean on each other as they both chase their dreams (in love, and in their careers).

If you like The Expanse, try Cowboy Bebop. A critically acclaimed story about four drifters who gather on the Bebop spaceship, the story explores each character through grief, regret, loss, and ennui, all set in the hauntingly backdrop of space.

If you like Ted Lasso, try HAIKYUU!! Just as Ted Lasso follows the rise of AFC Richmond, HAIKYUU!! chronicles the rise of the Karasuno Volleyball Club, and explores the relationships that develop for the team, the captain to the assistant manager.

If you liked Hawkeye, watch My Hero Academia! My Hero Academia is the story of how quirkless (i.e., both without any superpower) Izuku Midoriya aspires to be a professional hero in a world where heroism is a real profession, and how he comes to terms with the growing cracks within the hero system the more he follows down the path of a hero.

If you like Knives Out, check out Odd Taxi! While it’s definitely a little off the beaten path, it comes highly recommended by Thew, and it covers the story of an antisocial taxi driver who has somehow been connected to the case of a young missing girl. Oh, and he’s a walrus.

If you like The Good Doctor, watch Mob Psycho 100. Arguably one of the most wholesome anime of all time, Mob Psycho 100 follows middle-schooler Shigeo Kageyama, an incredibly powerful esper, who simply wants to be able to impress his crush by being ripped and socially aware. While he unfortunately is neither, that isn’t going to stop him from trying his best! A personal favorite of Thew’s, Shigeo is deeply relatable for anyone out there who’s never been able to read the room and who is trying their best — and in our shared opinion, Thew and I believe that he’s written as an autistic character.

If you like Fleabag (especially the second season), check out Paradise Kiss. A personal favorite of mine that holds a special place in my heart, Paradise Kiss tells the story of young high-schooler Yukari Hayasaka’s tempestuous and intense relationship with young aspiring couturier George Koizumi. Their relationship isn’t just Yukari’s first tangle with love, sex, and dating, but also forces her to really think about what it is she wants in her life — in her career, her love life, and who she wants to be as an independent woman.

If you like Supernatural, take a look at Full Metal Alchemist: Brotherhood. Mind you, it’s Brotherhood specifically, not the 2003 series. After losing their mother and performing human transmutation at a horrific cost, brother Edward and Alphonse Elric are on a quest to find the Philosopher’s Stone and restore their bodies. Heartbreaking, inspiring, and unnervingly human in its portrayal of each character’s struggles and grief, the show ultimately asks: What is the worth of a human life? What can be traded for it? Watch out for Episode 4 — it’s a doozy.