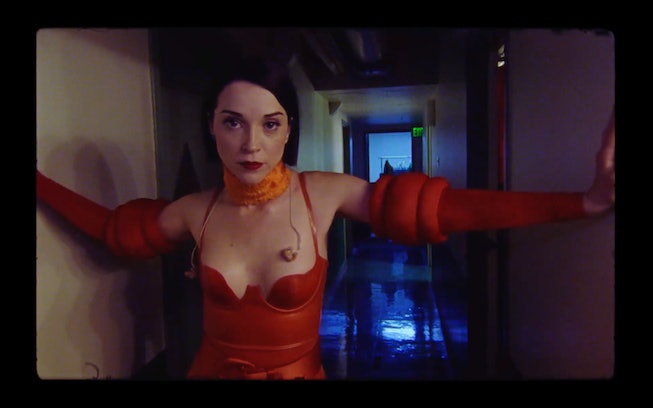 Music documentaries are traditionally something of a hallowed art form, drawing the viewer deeper into the world of an artist, capturing the essence of their supersized performer personas as well as the intimate moments the artists otherwise would live off-screen. It’s a daunting task to depict the rockstar within — one that real-life friends Annie Clark (aka St. Vincent) and Carrie Brownstein quietly skewer and deftly explore in their new film, The Nowhere Inn.

The film — which Clark describes to NYLON as “an acid trip of a movie,” is part concert footage, part surrealist mockumentary. As Brownstein (Portlandia, Sleater-Kinney) tries to distill her friend St. Vincent’s superstar image into a crisp documentary, Annie Clark’s apparent regularity and normalcy threatens to derail the whole project. What happens instead is an at times absurd, funhouse look at the relationship between artist and fan, artist and documentarian, and ultimately, artist and self.

NYLON caught up with Clark ahead of the film’s theatrical release on September 17th, which you can read below.

How did The Nowhere Inn come about? Was it something that you and Carrie had been talking about for some time?

I was touring for my record, Masseduction, and I wanted to capture the shows and make a kind of doc. But then I started thinking about that, and I was like, well, I want to tie it all together in some kind of way. So I asked Carrie if she would help me write it or something that we could do in between songs. And we started thinking that maybe the whole thing should be scripted, and maybe we should kind of unpack a lot of the ideas that we've been talking about for ages — like the performance of authenticity, the kind of narcissistic trappings that people can get into, the unpacking of identity, the hilarity of an unglamorousness of the road.

Like, what if we really dove in with both feet and made a film? And then we got script together and [director] Bill Benz involved who had directed some things with Carrie and Portlandia. And we just made this acid trip of a movie in a way that I think deals with the issues at hand and, ironically, in a more authentic way than it would have been to have a “unscripted” doc about me.

It is such a unique and uncategorizable film. Were there any influences you were thinking about while making it?

The film is also very funny. As someone who’s lived in the public eye, have you had to have a sense of humor about it all, the sort of absurdity of being a celebrity?

Oh, absolutely. I think in order to get good at say, performing, or good at being a musician, you have to kind of make peace with humiliation. The only way to get good is to be vulnerable and open yourself up and try things that you're not sure if you can land. I feel very connected to my own ridiculousness, and the dog and pony aspect, the mythmaking, the entourages and all that. That's all part of the spaceship that makes people float off into outer space and never come back again. You got to be careful with that stuff.

The film grapples a lot with identity and authenticity. Do you think there’s always a gap between artist and person — or are some people able to live out their artistic personas 24/7 in an authentic way?

In order to be a writer, which is what I am, you have to be able to write about the human experience. And if you sequester yourself from the human experience, then you won't have anything to write about. And so I think it's a little different for people who are writers and people who are, say pop stars, who don't need to write their own material, you know? ‘Cause you could more easily fly into outer space. But for me, I got to live and I can't just float away in the dream.

Do you feel that maintaining some privacy and some kind of distinction between your personal and private life is helpful toward your writing in the end?

I think I just can't wrap my head around the idea that it would be that interesting to anyone. It's funny, it's generational, too. If you look at my music heroes and when I was coming of age, it was all just like, I'm a loser, I'm a creep, you know, there’s a sort of self-deprecation that was celebrated. And I think we're in a new age of empowerment and self-positivity speak. And I don't really know how to do that. I tend to think of things a bit more like absurdist.

The film — both in its content and in its very existence — addresses the relationship between artist and fan and what artists owe to their fans. What do you think that relationship should be like?

I think artists owe their fans their absolute dedication to making great work. I think that's what artists owe their fans. I think that that will last. I believe that making great work will just outlast whatever today's fleeting fire storm is. I really do believe that. That's one of the few areas where I'm not cynical at all. And I actually am not cynical. I’m just discerning. Here's the catch 22: I think I'm not as interested in hearing what people think about something, unless they're doing something about it.

I question necessarily how much value saying what you think has in this context. Like for me personally, I get to connect with people in a really real way through this magic thing called music. And that means the world to me, that means everything. And I don't really think that it's necessary or helpful to know the ins and outs of my own personal opinions on things. You know my heart. If you’re a fan and the music moves you, you know my heart, you know my intention. If saying what I thought led to a really wonderful dialogue that moved the needle, then great. But I kind of just live my values and again, I would rather just quietly volunteer than just cast out on opinion without really any action behind it.

The Nowhere Inn is in theaters nationwide.