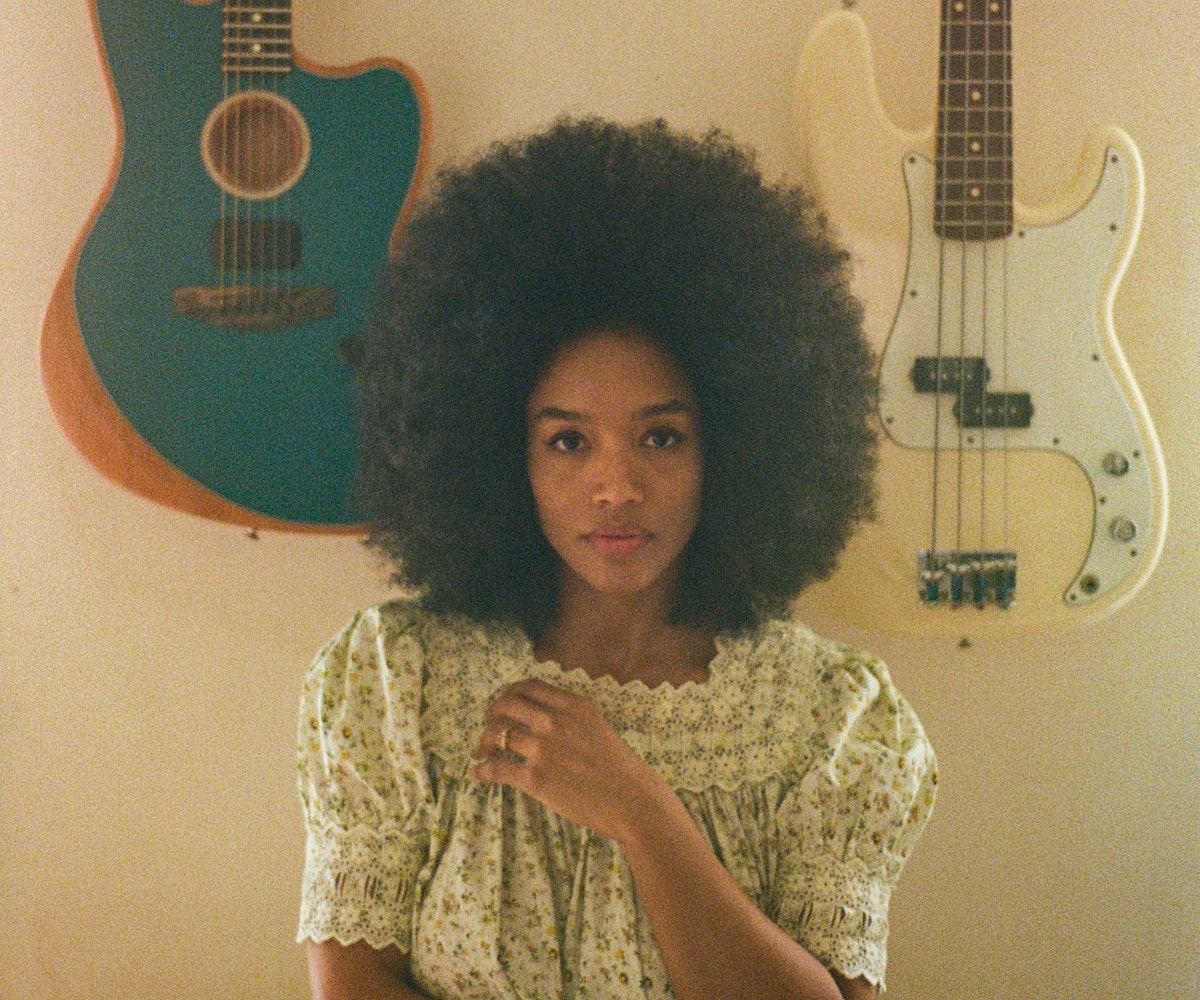 Musician and activist April Kae keeps a spreadsheet of all the places she’s moved since 1995-ish. It has six columns. The places Kae has lived are all color coordinated by location: Austin, Texas, is in blue; Little Rock, Arkansas, is purple; Portland, Oregon, is green; Philly is mustard yellow; and Florence, Italy, is turquoise. It’s not hard to read and the notes are minimal, almost making any detail that is written down incredibly important. “Mom moved Nikki + April to Austin, Texas,” reads one next to the year 1995.

“Interviews inspired it because it was hard to explain,” Kae says of the spreadsheet over a recent Zoom from her apartment, which also moonlights as her studio and sanctuary. “I made it because I like to keep records and make spreadsheets of things. I have a goals doc, a finance doc I’ve kept since I moved to NYC. I have all my journals from my whole life.”

But a spreadsheet can only hold and say so much. The document doesn’t account for her Quaker upbringing in Austin, Texas, which turned her into an activist at 12, nor does it mention a stranger occurrence from March 2021, when Kae’s video of her playing the bass (to Grover Washington’s “Lean on Me”) went viral on Instagram and TikTok. In the months since, her life has both been upended, and remained exactly the same, by that fickle beast that is internet fame.

The instrumentalist, singer, model, social activist, and soon-to-be graduate of Temple University — where she focuses on community organizing — has long been known among her tight group of followers for how she checks in. Now, Kae is learning to balance her newfound attention with what she ultimately wants her page to stand for: as a forum for answers and advice on self-care and the practice of managing depression day to day.

Over Zoom, Kae is relaxed sitting in her New York apartment, which she shares with her sister Nikki, the visual director of the band they’re in together, IMANIGOLD. (They recently released the single “RIDE ON,” a testament to their long journey together as sisters and bandmates.) Kae’s easygoing but prepared. She talks fast, with lots of verbal footnotes, but doesn’t walk me through her childhood with the inflection of going through a resume at a job interview.

Kae has become practical in the pursuit of following her dreams. Her practicality is key to her biweekly podcast, I See What You Mean, where she brings on guests across different gender binaries and backgrounds, and offers tips to creatives based on her own experiences. It seems to be the reason why she’s able to make so much happen for herself, now that she’s nurturing a six-figure career as an artist and, naturally, an influencer. But what she’s really fighting for is sticking close to her activist roots, scrapped together by the trippy duality of navigating different economic classes as a biracial, queer child on Midwest and Southern soil.

Growing up with a soul singer mother and instrumentalist father in Austin, Texas, Kae was immersed in music from birth, but this was no family band situation; everyone explored music on their own terms. In Austin, where her parents lived on different economic sides of the town, she flip-flopped between various environments of living, sleeping, and eating, and went to a mix of public and private schools. Kae’s grandmother eventually bought her a bass, which she’s played for the past 20 years.

At 12, Kae fell into community organizing after her mother took her to a Quaker church. “I don’t like to generalize... But all Black moms I’ve met are super resourceful,” Kae says. “We didn’t have family in Austin, really; most of her family was in Little Rock. But she found the Quaker church, and the Quakers have a big history of social justice work and were a big part of the Underground Railroad.” The people of Austin’s Quaker community, gardeners, art teachers, and professors, became Kae’s caretakers as well.

When Kae accepted a gig in New York City on Wall Street in the summer of 2014, it wasn’t a particularly calculated decision. She’d finessed a finance internship, the kind your college brain thinks you need to make it in the job force, and took it. But working 6 a.m. to 10 p.m. Monday through Friday and on weekends quickly made her realize she was destined for a creative’s life. “Even though [the internship] would give me access to certain types of money and power, it wouldn’t be the best use of who I am,” she says.

But if there’s one thing the real world can’t prepare you for, it’s going viral for the first time.

In February, Kae improvised a bass solo to the melody of “Up” by Cardi B and posted it as a reel on her Instagram. “I literally went to Spotify Top 100. The No. 1 song was ‘Up’ by Cardi B,” she says. “I was like, ‘All right, this is a song people like. I like this song. Cardi B’s from the Bronx, she’s a woman of color. I vibe with this.’”

In the video, the camera is positioned so that April looks larger than life, and she sways with an attitude that falls in rhythm with the fast-paced instrumentals. The followers of her main page didn’t even know Kae played the bass. She posted the video as part of a wider plan to let her followers really know her musical talents. It received more than a million views.

In March, she posted another bass cover, this time of Grover Washington Jr’s “Just the Two of Us.” It was around the time the Stop Asian Hate movement sparked, and she thought it was a moment to show solidarity. It received more than 6 million views and 7,000 comments.

“Going viral was a f*cking trip for me,” Kae says. “Part of my thing with social media is I got on to connect with artists, so I was pretty determined to grow pretty quickly. I wasn’t posting to show my friends my life. I wanted to meet artists, especially being in New York. I wanted to not even grow my following but grow my presence up.”

At that point, Kae wasn’t new to the influencer game; she knew how to negotiate her contracts and keep up with invoices. But Kae already had big, grand preconceived notions about what would happen to her once she went viral — because she had watched other people go viral. After experiencing it herself, Kae wrote a reflective post on Instagram in April comparing her expectations to reality. “Let’s address it: I’m going viral,” it began.

“I thought @vogue and @nytimes were beating down [the viral star’s] door for interviews. Their inbox was filled with hundreds of brands making huge 💸 sponsorship offers. Celebrities were inviting them to dinner. They immediately vacated their raggedy (but cute) apartment for a penthouse with a live-in chef,” she wrote. “Well, if that’s what you’ve been thinking about me, you should stop thinking it because wow, it’s not true at all.”

“The extent to which I feel encroached upon and consumed as the product… It's something I cannot invest too much in.”

If anything, going viral only gave Kae more clout and the ability to ask for more money, but she already knew how to do that. “The fact I’m confident with money, it makes a world of difference,” she says, crediting Wall Street and her degree in economics.

Ultimately, Kae is happy she went viral when she did, though she’s not sure if she would’ve been able to handle it if it arrived earlier. From managing her depression and ADHD, she knows she sometimes has to have guardrails on her own social media accounts in order to remain who she is and evolve. “Most of the people writing are positive, but the extent to which I feel encroached upon and consumed as the product… It's something I cannot invest too much in,” she says.

Navigating her privilege and reality as a queer, light skin, biracial, and weird Austin Black girl with a curly afro who’s making space for others through music and social work — is a continuous learning process. But she doesn’t shy away from these feelings and from sharing what she learns online. In between videos of bass playing and sponsored posts, Kae’s captions read like diary entries. She tells you exactly when she is hating her Instagram and when she is feeling free.

Before, when Kae would watch other people go viral, she was jealous of the bigger stadiums or a line of custom guitars, but once she was able to admit to herself those weren’t even the things she wanted, it was a relief. It confirmed what she really wants to do: “I want to collaborate with other Black women to make music and do things around self care and social justice,” she says.

“It’s scary for someone to hear that I left Wall Street because I know I could do more with my life,” Kae remarks. “People say working on Wall Street is so hard. No, leaving Wall Street to be an artist is hard. I do way more math and way more spreadsheets [now] than I did there.”