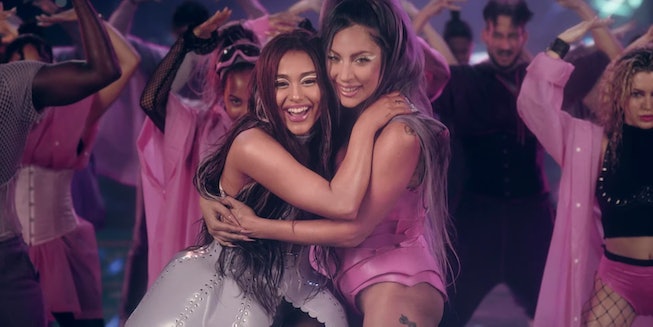 If the world is in fact nearing its end, then I want to live in the dystopian future that Lady Gaga and Ariana Grande put forth in their joyous "Rain On Me" music video. On Friday, the two pop stars released the highly anticipated visual for their stadium-sized collab "Rain On Me", and it makes a convincing case that, when the world falls, society should really just become a huge dance party.

Decked out in holographic latex, Gaga and Grande lead their two crews through a fully choreographed routine in the middle of a thunderstorm. Neither of them miss a single beat, even when a falling knife lodges itself into the side of Gaga's thigh; she just yanks it out and continues on, a dedication to optimism that the world is sorely missing nowadays!

Grande and Gaga released the French-house inflected track on Friday after weeks of teasing. Speaking about the collaboration to Apple Music, Gaga explained that the song is a metaphor for "the amount of drinking that I was doing to numb myself."

"I'd rather be dry. I'd rather not be drinking, but I haven't died yet. I'm still alive," Gaga added. "Rain on me. Okay, I'm going to keep on drinking."

Grande, on the other hand, hinted that the song also symbolized her own personal traumas, saying: "I'm so down to just walk in, help you tell your story, and also express some of mine through your thing. Thank you for having me. Here we are, we can both relate on this topic."

Grande, who has been vocal about her struggles with PTSD after the 2017 Manchester terrorist attack at one of her concerts, commemorated the song's release with a sweet note about Gaga on Twitter, calling her "a sister to me."

"Rain On Me" is off Gaga's highly-anticipated forthcoming album, Chromatica. Watch it below.