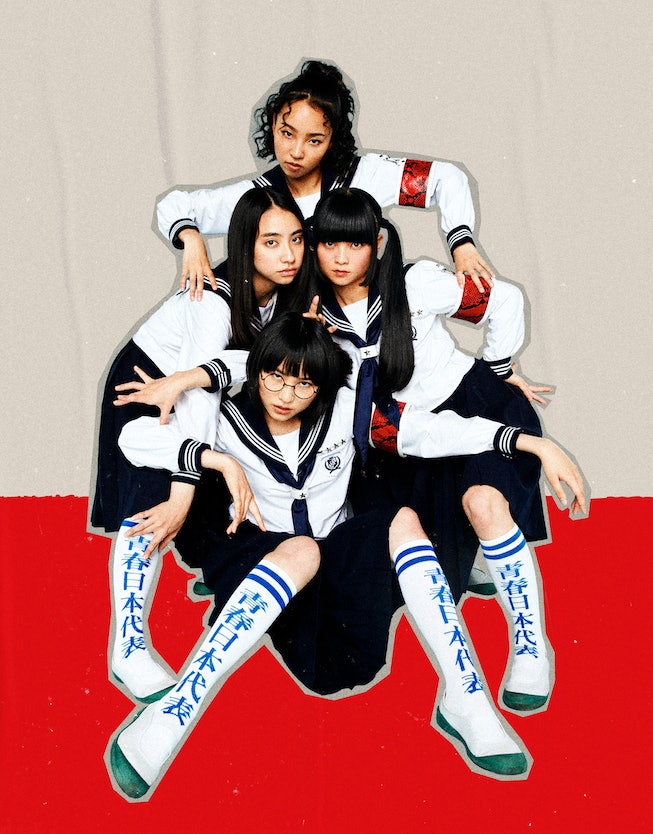 “The best part about being young is that I can head bang all I want. And then I can go on to the next concert and it’s already healed,” says Atarashii Gakko!’s Suzuka. Her reasoning — curious, unrestrained, mischievous — arrives so completely out of left field it sends bubbling laughter coursing through the group.

If you follow Atarashii Gakko!’s TikTok page, you’ll know that headbanging is a crucial part of their world — as is stamina, which they use to carry each other on their shoulders while dancing to Cardi B’s “Up” in school uniforms.

The Atarashii Gakko! of the virtual world are a charming, captivating, endearing force to be reckoned with, and the reality isn’t much different. You would think Zooming in from Japan on a weekday afternoon would be a casual affair, but there they are, dressed in their full school uniform regalia and accessories: Suzuka’s round glasses, Kanon’s sleek, straight hair, Rin’s wild curls, and Mizyu in her dual ponytails (which she often uses for her helicopter attack).

The quartet — made up of Suzuka, Rin, Kanon, and Mizyu — debuted in 2017 with the single “Dokubana.” With the aim to express themselves and live a “daring and fun-filled life while searching for freedom within the margins of society,” as their Spotify bio states, Atarashii Gakko! formed their unique concept against the backdrop of school life, the mise en scene for these sailor uniform clad firecrackers. Sometimes — as in Seishun Academy, their five-part web series — Atarashii Gakko! are our guides to Japanese etiquette and culture. Other times — as in Japan Youth Trilogy — they rekindle the warmth of memories of childhood, when you pulled all-nighters before exams and fought with your friends over boys.

Their songs talk about the needless pressure of having to define what you’re meant to be at an age when you’re barely getting your assignments in on time, but also about how tall the handsome guy in their class is, or how unfortunate it is that they don’t have big boobs like another classmate. It’s hard to quantify Atarashii Gakko!’s exact concept, purely because one risks oversimplifying or undermining their efforts. But if you were to break it down to the essentials, the crux can be captured by three pillars: dance, sailor uniforms, and representatives of Japanese youth.

“Dance has been our utmost passion and strength since we were young kids,” says Suzuka, the group’s leader.

The four members of Atarashii Gakko! built the foundation of their performance on the backs of kumitaisou, a form of coordinated gymnastics commonly practiced in Japan’s PE classes that’s known for its complex human pyramids. Their kumitaisou, however, has evolved into a fluvial, descriptive lyrical language relying on simplicity, literality, and feeling. Their movement is meaning — a simple sway depicts the high of being swept away by emotion, and a forward facing palm on top of your head becomes a pineapple. “When we first listen to [a] song and start making the moves, we are dancing with our heart and doing it very instinctively.” explains Suzuka. “Like, ‘Oh, we want to do this kind of move!’ But after that process comes this programming — it’s a very intricate process of combining all the elements. It's very like using our brains.”

“It’s not just that it’s fun and our strength or something that we are good at,” Mizyu adds. “It is also the strongest tool that we have to convey our message.”

The message comes packaged in the group’s signature sailor uniforms — a direct nod to Japan’s universal school uniform for girls — and their ambitions to represent a new kind of Japanese youth on the global stage, one that carves out its own weird shape within the rigid structures of society.

“Teenage is the best time of our lives and it's so much fun,” says Suzuka before clarifying that while being representatives of Japan’s youth may be the last piece to their eccentric puzzle, it’s certainly not a weight they carry on their shoulders.

“We are just saying that. We’re just calling ourselves the representatives,” adds Mizyu. “It can be said that we are just having fun ourselves, but hopefully [also] reminding people that youth is fun.”

It’s a fair reminder to themselves as well, especially as they move to the next stage of their careers — global domination. After a series of releases that expanded their horizons, such as “Koi no Shadanki” and “OTONABLUE,” and bolstered by an audience of 3.3 million followers on TikTok that gravitated to the nonchalant, irreverent charm of their videos, they arrived stateside in 2021 with the booming, bustling “NAINAINAI,” released under 88Rising. Their latest album, Snacktime, out now, naturally followed in November. Making the project brought them to sweltering Los Angeles to test their musical limits.

“We’re wearing uniforms, but we are free and we are individuals. We are hoping that Japanese girls also realize that.”

“We had been taking part in making the music and writing the lyrics before, but this time, the two and a half months [in L.A.], we were really hands-on. Starting from the concepts, what we wanted to convey with the words and the songs. We were in the process entirely from zero to 10,” recalls Suzuka.

For the youthful, sizzling Snacktime, the quartet also teamed up with producer Money Mark — a match made in heaven, they say. “He felt like our ‘master,’” Mizyu says. “We met every day and we had a little studio in the place where we were living, and he came by every day. We worked on the music daily, having some snacks in between. It was almost like living together.”

Like all their releases, Snacktime is a gripping fever in disguise. The frenetic “Candy” is almost minimalistic in places, with just steady rap and fast-paced beats, but the effect it produces is quite similar to Suzuka’s head bangs. Dance, synth, and retro come knocking at your door on “Fantastico,” bringing with them a spellbinding ’70s rave.

But it’s through the cinematic “Pineapple Kryptonite” we understand just how far Atarashii Gakko! have come in four short years. The track’s music video brings them all the way into the middle of a U.S. desert. The literal representation of their arrival in the West notwithstanding — “we gotta tell the world,” they say on the track — the song plays on classic horror tropes with the group playing a happy family camping out in nature, only to be chased by a grotesque alien. It’s the exact brand of weird, wonderful, and just a tad bit self-aware that we’ve come to expect from them, this time seeped in American pop-culture.

For Atarashii Gakko!, this is their own personal brand of rebellion. Instead of wanting to dismantle society, they defiantly create their own spaces within it, populating them with fun, frenzy, and an expected streak of charming irreverence that subverts rules — just never in the way you’d expect.

“Making the [school] skirt shorter in Japan is against the rules,” says Mizyu as an example at one point. “We, as a group, decided we’re not going to do that. We’re going to have these long skirts. We are going to follow these rules about wearing a uniform as they should be worn. But instead, we are showing our individuality and our freedom in different ways. Like we’re wearing uniforms, but we are free and we are individuals. We are hoping that Japanese girls also realize that.”

Even as they’ve moved beyond the four walls of high school, this playfulness remains the bedrock of their approach. Over time, it’s become a way of life rather than a reaction to life’s issues.

“We have an attitude towards playful that is like… serious playful,” says Suzuka, after a lot of thinking. “We take it seriously.”