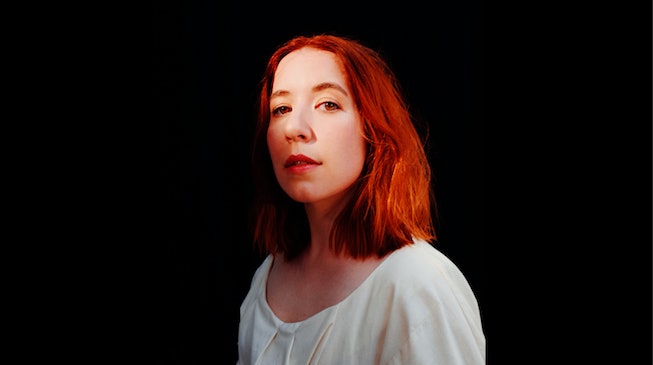 Austra’s first single “Risk It” opens with an unearthly warble. Wailing out the name of the track, the Toronto-based electronic-pop artist pitches her voice up to such a degree it threatens to split straight into the Earth. It’s unnerving and disorienting. It’s also incredibly catchy.

“Risk It” was the public’s first taste of Austra’s fourth studio album, HiRUDiN, out now — a striking collection of dynamic pop songs that show just how pleasurable unconventional song choices can be.

Of course, Katie Austra Stelmanis is no stranger to unconventionality. Stelmanis has always played at the fringes of dance and pop, thanks to a distinctive watery vibrato that’s made all of her songs sound just a bit experimental. On her last album, Future Politics, Stelmanis’ trembling vocal was the wily acid cutting through an otherwise steely club record. But on HiRUDiN, her unruly vocals are matched by a just as ambitious pop production, a mix of lush orchestral backing and playful electronics — and it's stunning.

Written during the tail end of 2017 through 2018, HiRUDiN explores the dark allure of, and the necessity of release from, toxic relationships. But though its themes were born from fraught circumstances, the album feels more like one of newfound freedom, and breathless relief. On opener “Anywayz,” after she pleads for her partner to come back, she eventually realizes that regardless of what happens, “the world keeps turning anyways, the flowers come up anyways, the mountains rise up anyways.”

Fittingly, Stelmanis wrote part of the album in a small bunker-like studio in the Spanish countryside, before she returned to Toronto to finish production with a children’s choir, a kamancheh and cello duo, and other musicians and artists — all firsts for the usual solo creator. In this way, HiRUDiN is also Austra at her most unbound and experimental. By the time the birds begin chirping away on mid-album stunner “It’s Amazing,” marking the beginnings of a new day, one can’t help but feel that it's also the sound of an already-inventive artist breaching the edge of a wide open frontier.

The album is about the end of a relationship, and you wrote part of the album when you were in the Spanish countryside, which sounds like the most idyllic place you can be after a traumatic fallout of a relationship. What was it like to be there?

It's funny because I never sought out to spend time in the Spanish countryside. But I started dating somebody who lived in London and that person, their parents bought a house in the middle of nowhere in Spain to retire in, pretty much. But they hadn't retired yet so it was empty. And so, my partner, at the time, she ended up renting this little weird, almost bunker-type structure that was next to the house on a mountain and she turned it into a musician artist residency, called Casa Discola. That's where the song, "Mountain Baby" came from, because I wrote it on a mountain in Spain.

Did it spark a different state of mind when you were writing and creating music, being in this new environment?

Yeah, I think so. The reason why it was such an amazing place to work is because it just moves so slowly. It's the kind of place where on Sundays absolutely everything is closed. It just shuts down. They have a siesta between one and five p.m. every day. It just takes forever to get anything done or to have to communicate with other people in the town, everything is just so slow but that's actually amazing when you're just trying to work. Because you could just spend so much time rotting away in the studio in the best way possible.

HiRUDiN is a really intimate, emotional record, but it sounds like when you were doing most of the work, you were writing about events that happened in the past. What was that like?

To be honest, I feel like there's definitely some songs that were written very much about things that had happened in the past, but there were also some songs on the record that I feel like I wrote about what was going to happen in the future. For example, “Anywayz” is one of the last songs that I wrote for the record and I wasn't going through a break up when I wrote that song and I was years from my previous breakups. But since writing that song, I went through another breakup and I was like, "Oh my God. I'm psychic.” I wrote the ultimate breakup song for a break up that hasn’t happened yet. And then, it did happen, so I like, "Oh my God, I need to be careful what I write” because I just brought it into fruition, or something.

You worked with a lot of musicians that you previously had never worked with for this record. For someone so deep into their career, how important was that decision to embark on something totally out of your comfort zone?

It was definitely essential. I had made three records already in similar ways and working with the same people, and I just felt like I hit a wall working that way. I felt uninspired with what I was making on my own and I just didn't really know what direction to take. But I decided at the beginning of starting to work on this record, I made the decision early on that I was going to collaborate with new people and that I wanted to work with an outside producer, which I had never done before. And so, I went into it knowing that that would be the case. And I booked really the first real collaborative session was one that I booked in Toronto where I booked a bunch of session players that I had never met before and I just invited them into improvise on the tracks.

Did you feel you learned a lot of new things just working with them or having those sessions with them?

Definitely. And that was the thing. Aside from just these sessions, I was also just booking tons of sessions with different players, or other producers, or other musicians, anybody who wanted to. In a way, because I had never really worked with people, I didn't really know how to go about it or who I should be working with. So it started out like speed dating. I would just book tons of sessions and maybe it would just be I'd hang out with somebody and we wouldn't even play any music. But we talked about music, maybe played each other some things. But every single session or meeting I had, I definitely learned something and walked away with something, and it made me mad that I had never done it before because I'm like, "Oh my God. I could be the best producer on the planet right now if I had actually tried working with other people and just learning from what other people are doing." But I was adamantly not into doing that for a long time. I don't know why.

What prompted you to lean towards a more acoustic and live instrumentation sound for this record?

I love that you used the word freaky. What’s the appeal of that freakiness for you?

I just like music that makes you feel slightly uncomfortable in whatever way that needs to happen. Making things sound just a little bit unexpected, I think is important to me.

Has what your ear is drawn to as a producer changed over the years?

But I feel like since I've been making music for such a long time now, I found that I do feel super comfortable in the studio and I do feel like I am actually able to communicate what I want and what I don't like in a technical way that people can understand. Now I feel much more able to have successful collaborations with other producers because of that, because it's like we're more on equal footing. In a sense I feel like the music that I make is always reflective of where I'm at technically, in a way. And then, it changes as I learn more.

NEXT UP
Entertainment
Samia On 'Honey' & Saying The Ugly Part Out Loud
Entertainment
Harry Styles' "As It Was" Grammy Performance Featured A Silver Tinsel Onesie
Entertainment
Beyoncé Is Now The Most Awarded Artist In Grammy History
Entertainment
Taylor Swift Sparkled In Midnight Blue On The 2023 Grammys Red Carpet
Style + Culture, delivered straight to your inbox.