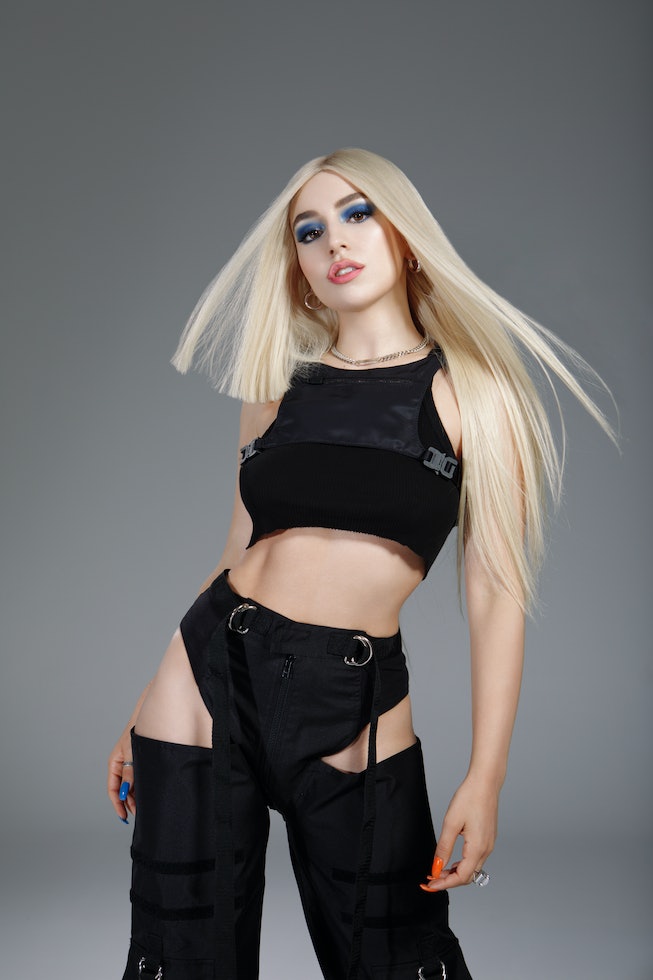 The music video for Ava Max latest single “Who’s Laughing Now” opens in hell. Well, to be exact, it opens in the square, drab settings of a corporate office, which feels close enough. After being handed a termination notice by a cackling, bespeckled boss figure, the whistling tones of the song kicks in and Max, decked out in a black leather fit, spends the rest of the visual trashing the office and dancing in the street before eventually getting locked up in a psych ward.

Contextually the song and video, the second single off the pop star’s long-awaited debut album, is the direct follow-up to her previous single, “Kings And Queens,” which was positioned as Side A: Heaven. But it's messaging really goes all the way back to the song that skyrocketed Max to fame in the first place: her massive 2018 hit “Sweet but Psycho.”

“One of the characters is where I'm playing a psycho, which I'm not a psycho, but the doctor is basically telling me I am psycho,” Max says over the phone. “It's another continuation of being gaslighted in a way. For 'Sweet but Psycho,' the meaning behind it is a girl being misunderstood and being gaslighted into the situation.”

It’s also, somewhat, an artistic analogy of Max’s real journey to where she is now. The Los Angeles singer’s big break in 2018 didn’t come without years of being gaslit, and demoralized by gatekeepers in the music industry as she tried to find her footing. Now, with a three time-platinum song under her belt and an audience of over 1.5 million strong, Max is ready to collect her laurels and, maybe, get some revenge along the way.

That’s where “Who’s Laughing Now,” comes in. Soon to follow will be her debut record which Max has been teasing since last year. She recorded over 100 songs for the record, and after months of curating the selections — “I didn't want there to be a ballad on the album,” she asserts — Max is confident that the final result is now a full reflection of her “energizer bunny” personality. “It's going to be very theatrical,” she teases.

Below, we caught up with the singer to hear about how the new single came together, what to expect from her debut album, and why the music industry still has a long way to go when it comes to gender equity.

How do you feel with “Who’s Laughing Now” finally out in the world?

I feel so incredibly happy. We worked really hard on the song. For me personally, the song means a lot. It's kind of like what I went through growing up, trying to make it in the industry.

It was based on your own personal experiences?

Yeah, definitely. I mean, I don't want to say revenge. It's kind of like a revenge story in a good way. It's about rising up and seeing the light at the end of the tunnel and one of the first sentences in the chorus is, "Don't you know that I'm stronger," so it's kind of like telling yourself and giving yourself a pep talk. Kind of like, "You are stronger than this. You can go on."

The music video is a continuation of “Kings and Queens,” but with this being Side B: Hell. Tell me a bit more about this concept.

Heaven, side A, “Kings and Queens” feels really strong and bright to me, but also like an anthem. Everything's an anthem. For me, it's impossible to not write an anthem. For side B, hell, it's kind of like when you have an angel and a devil on your shoulder, you feel like you're being pulled into different directions and it's okay to take from both, but not fully be in the dark side or the light side, if that makes sense. Just be you and focus on you. It's kind of just symbolizing that we have a devil and angel on our shoulder in daily life. It's about how we navigate that.

Does this devil and angel concept filters into the rest of your debut album?

It does. You're going to see a lot of both worlds on the album and it's going to be very theatrical. It's kind of just saying that you can have two different sides to you and still be you because that's the world we live in. We feel like sometimes we get pulled towards darkness and lightness all the time, so it's about how you navigate things and that's the message of everything really.

You’ve said the album was finished as early as the beginning of 2019. What’s happened to the project from then, to where it is now? Has it changed at all?

We had it finished and then we added a few more songs and then we took out a song. There are older songs, but then also newer songs on the album. We delayed the project as well because of the pandemic and everything going on. This year has been definitely challenging, I think, for every artist. I just think now is a better time than it was maybe a few months ago.

With the songs that you replaced, what were they missing that you were looking for for the album?

i definitely wanted the energy of the album to be upbeat. I didn't want there to be a ballad on the album. I wanted it to feel like my personality, which is funny because all my friends call me an Energizer bunny. I'm always upbeat and I have energy for no reason. I don't know why I'm like this, but I am like this. All my songs are very energized and very dance and pop and big anthems. I think this album really represents who I am. It feels cohesive to me. Cohesiveness is a funny word when it comes to albums, because you don't want everything to sound the same. I personally don't like when albums, every song sounds the same. That's one thing I really didn't want on this album. When you hear it, each song has a different character and that's the goal I wanted to have for this.

Until we are equal, we will keep fighting.

Of the previous singles you have out already, “Sweet but Psycho” and “Salt” are on the record. What made you want to have these two songs be a part of the album and not your previous singles?

It's my debut album and “Sweet but Psycho” was such a big part of my career so far in the last two years. “Sweet but Psycho” also matches the album title and what the album's about and it just feels right. I feel like the fans would be disappointed if it wasn't on the album.“Salt” is a fan favorite and I did it for the fans, for sure. “Salt” was on YouTube first and then we put it on Spotify and then it's streamed like crazy with no promotion, no marketing, just because it's such a fan favorite. I just couldn't leave that one out. There are a couple other ones that they've heard, but most of them are new.

With the huge success "Sweet but Psycho" had, do you ever feel pressure to replicate that again?

It's funny you ask that. "Who's Laughing Now" is actually, in a way, "Psycho" part two. The music video, I wrote it like that on purpose, because I really wanted to have different characters and I wanted it to feel a bit like how girls feel in industries. They feel like they're being called psycho because they're trying to show everyone, including men, in the workforce that they can be just as good as men, if not better.

I always want to see women in positions of power because one, I think women are better than anybody on the planet and two, because we can do it and we work hard and we multitask, and we give birth. I mean, that's pretty huge. In the video, one of the characters is where I'm playing a psycho, which I'm not a psycho, but the doctor is basically telling me I am psycho. It's another continuation of being gaslighted in a way, so for "Sweet but Psycho," the meaning behind it is a girl being misunderstood and being gaslighted into the situation.

Do you feel like the music industry has gotten better with having more women in positions of power?

I don't think we're there yet. I think we are pretty far from becoming equal or something like equal. Until we are equal, we will keep fighting.

Do you still encounter gaslighting in the industry?

I feel like it always happens to us. You kind of see it in the "Who's Laughing Now" video, where music instruments and music are coming out of my head. It's like, no matter how many men and executives told me no growing up and that I'm never going to make it. I've always had music in my veins. I always knew I was going to make it no matter what. That really is a representation of "Who's Laughing Now," [me] basically telling everyone to just fuck off.