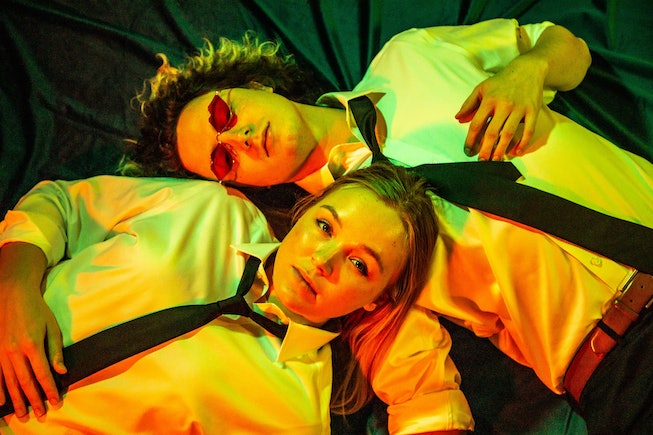 Toronto band Babygirl is made up of songwriters Kiki Frances and Cameron Breithaupt. Since 2016, the friends have been making blue-tinged guitar pop songs that live at the extreme ends of their emotions — but in a cute way. They either feel so insignificant they’re “overbored” with life, or so in love “you would swear I lost my mind,” as on their very relatable 2018 track “Soft.” Their sophomore EP of unrequited love songs, Lovers Fevers, caught the ear of Charlie Puth and Maroon 5 songwriter Jacob Kasher, who subsequently signed the duo to Sandlot Records. Now, Babygirl is announcing its follow-up, Losers Weepers EP, out April 16, and sharing its latest single and video “Nevermind” exclusively on NYLON below.

The fuzzy rock song captures the prickly defensiveness you feel when you realize the person you like isn’t “in the deep end” as you thought. Full of soaring guitars and written with Steph Jones and Phoebe Bridgers collaborator Marshall Vore, “Nevermind” also channels the spirit of ‘90s rock; you could imagine it soundtracking She’s All That in a parallel universe.

“I like the word ‘never mind,’” Frances writes of the song in an email. “It’s often said after you’ve said something you immediately want to take back or undermine, and we like pointing to that nervous tick in the context of a romantic relationship. Like, ‘I love you… wait, you don’t love me back? Never mind.’ We like to write from a ‘you can’t fire me, I quit’ place. Everyone has different defensive instincts, and that’s definitely one of mine.”

In the accompanying live performance video, the two solemnly perform the track under the pink spotlights of Toronto’s historic Opera House venue. Watch below, and read on to learn more about Babygirl, Losers Weepers, and their mutual love for Lil Wayne.

What are you both up to right now — describe your surroundings.

Breithaupt: We are both drinking cold brew coffee in a messy home studio in Toronto. We’re lucky to be in a room with plenty of natural light. There’s a whiteboard on the wall with song titles all over it. The previous tenants painted one of the walls with a big mural of a sunrise, so there’s lots of color, which is nice.

How did you two meet, and start up Babygirl?

Frances: We met in school! We both got into the music program at Humber College in Toronto as vocal majors. We liked a lot of the same music and that made us want to try making music together. We immediately bonded talking about great pop songwriting. At first we thought we were trying to write songs exclusively for other artists, but we both grew up as kids who wanted to be performers, so we realized pretty quickly that we wanted to start a band. And we like the level of creative control that comes with being an artist.

What was the journey like creating your upcoming EP Losers Weepers?

Frances: Each song had its own process. “You Were in My Dream Last Night” probably took the longest. We started writing that one in 2018 and chipped away at it over time, changed the production a bunch, too. We also collaborated more on this EP than ever before, working with other writers and producers on some of the songs taught us more about what we like and what we don’t like. Other people’s creativity and ideas can be really enabling.

Breithaupt: It was just as gratifying as it was hard to do. We often throw around that quote, “There is little joy in writing, but there is great joy in having written.” It was also a really empowering creative experience to creative direct the art for the “Nevermind” single and for the EP, from sourcing costumes, commissioning the calligrapher, working with Becca Hamel on set for the shoot, doing layout — all of that.

I read you both initially bonded over Lil Wayne. What’s your favorite Lil Wayne song?

Frances: Yeah, one of the first times Cam and I spoke he was wearing a Lil Wayne shirt and I commented on it. Cam’s definitely the super fan between the two of us, but I love Wayne’s verse on “Forever.” I love “Phone Home.” I love how weird and funny it is. I think it’s a special combination to be able to write a clever quotable lyric the way he does while also not taking yourself too seriously. His vocal delivery is also endlessly entertaining.

Breithaupt: It’s really tough to overstate how culturally significant he is to the landscape of modern music. You listen to something like the “Demolition” freestyles and it’s like... the blueprint for the whole texture of current pop-trap vocals, 13, 14 years ago! And at the same time, it has really conventionally great punchlines and schemes. It’s super stylized, but rarely at the expense of substance.

A bunch of my favorite Wayne stuff is mixtape or bonus track material that never got an official commercial release: “Weezy’s Ambitions,” “Live From 504,” “I’m Me,” “I Feel Like Dying.” There’s so much energy to the writing and vocal delivery on those records. I would really love to produce for him someday.