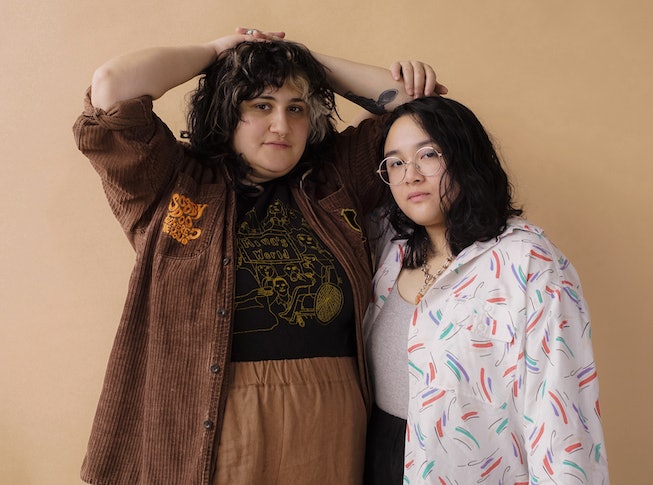 Bachelor’s debut album, Doomin Sun, is filled with the kinds of confessions you could only feel comfortable speaking out loud to a friend. Whether it’s about anxious spiraling, wet dreams, unrequited crushes, or the existential dread of the inevitable End Times — it’s all laid out here in bracing, tender honesty.

It makes sense: The two brains behind the band, Palehound’s Ellen Kempner and Jay Som’s Melina Duterte — two celebrated indie rock musicians in their own right — are best friends above anything else, a synergy that fueled the creation of their first body of work together, Doomin Sun, out now. Written over the course of several hangs — but primarily during a feverish two weeks between stints of watching The Sopranos at an AirBnB in Topanga — the album is a testament to how much braver we all feel going through life when someone else is weathering it all too, right beside you.

Ahead of the record’s release, Duterte and Kempner phoned in from their respective coasts to chat about the album, their love of The Sopranos, and, most importantly, their friendship.

NYLON: Bring me back to when you met in a Sacramento green room back in 2017. What were everyone’s first impressions?

Kempner: My first impression of Melina was that she was extremely kind and welcoming to us. Palehound was opening for Jay Som, and I was really nervous because I was a huge Jay Som fan. I did that thing where I paced around the venue, like, “Should I go back there and say hi? I'm not sure. Would that be weird?” And then I did, and I just remember Melina opened her arms when I walked in the room. That was the gesture, and I was like, Oh, yes, this is my friend.

Duterte: Weren't we sound checking and then you came in and we were like, "Aaaaaah!" Screaming?

Kempner: Yes, you're probably right. I think I was still nervous after that because I wasn't sure what your vibe was, or if that was all you. You just never know with people. Sometimes people seem like they'd do something like that and then they're rude later.

Duterte: I thought you were awesome and so nice. We just got to talking and immediately bonded over being queer. We just talked about gay stuff within the first, like, 15 minutes? That usually solidifies a friendship.

Kempner: Larz, who's in Palehound, who is also queer — I just remember the three of us in a huddle in the green room. Basically yelling about being gay.

“Sometimes it's just really fun to be with your friends and make something that's built on like, I dunno, the foundation of love and friendship.”

NYLON: How did the topic of recording a full project together come up?

Duterte: After our initial mini tour, we got pretty close for obvious reasons and we kept in touch. Eventually Ellen came to L.A. because she was visiting her partner's family and wanted to make music with me, and we decided to write music at my house. That was our first time hanging out one-on-one, and we were both so nervous, being so cute around each other because we didn't know each other that well.

Kempner: I still remember driving to your house being really nervous. I remember you opening the door and us both giggling and doing small talk. I was like, Ok, it seems like we are both on the same page. Then we went to your bedroom and saw your studio and you were just so cool. And you let me sit on your bed! I was like, "Word."

Kempner: Oh yeah, I remember that. That was cute. That was a good ice breaker.

Duterte: And then we wrote a song about wet dreams, which was the ultimate ice breaker.

Kempner: And here we are. [Both laughing.]

Duterte: Honestly, that really established our friendship in the most vulnerable way.

Kempner: We hung out that time and got closer, decided we wanted to write together and had eight months or something until we actually did again because both of us were touring and the holidays. We ended up going to Big Sur to my aunt's house, thinking it would be a big inspirational [thing] where we were going to come out of it with a million songs. What actually happened was that we just ate chocolate croissants and took acid and played three riffs.

Kempner: I have this amazing picture where we were on acid and we picked carrots from my aunt's garden, and I have this picture of Melina with two handfuls of carrots just looking so happy.

Duterte: I feel like we really got to know each others' music tastes [during that trip] because we kept showing each other music that meant a lot to us. We were like, "What did you listen to in middle school?" And we'd go through the past and connect that way. We were also really high.

Kempner: We went deep. I learned a lot about Melina's childhood and vice versa. We finally got to hang, and we really got to know each other and that was amazing. I feel so grateful for that week, but we did not write any songs, really.

Kempner: On the very last day, as we were checking to make sure we didn't leave anything behind as we were locking up the [Topanga] AirBnB, we were like, "Oh my god! We forgot to record ‘Sand Angel,’ the one song that was written going into this." So that's why we have the demo version on the album.

Duterte: But that just shows how much fun we were having, because if you think about it, we were doing stuff every day for two weeks. What was our schedule like, Ellen?

Kempner: Our schedule was pretty pathetic. We woke up at 11 every day, and we would have a smoke downstairs, drink a Yerba Mate, and eat some yogurt or something. And then record for like six hours and then be done. And then be ready to watch TV for like four hours.

Duterte: And watch The Sopranos.

Kempner: I just don't look at you. I stare blankly ahead.

“There were no rules to this.”

NYLON: Were there any hurdles in the making of the album? How did you talk them through?

Kempner: There was not a lot of deep discussion about anything. Things happened really easily, I can't emphasize that enough. We really would start with the music and riff and jam on something, and usually either Melina would have lyrics that were written, or I would go write lyrics and she would go write lyrics, and we would talk about them afterwards. I think both of us really respected each other's expression and intention behind the lyrics of the songs.

Duterte: I think the experience reminded me that not every album or every body of work that you make has to be full of conflict or challenges. Honestly, it's refreshing to feel that way because musicians are looked at as these really depressed people that are doing this as this cathartic way to move throughout their life. Sometimes it's just really fun to be with your friends and make something that's built on, I dunno, the foundation of love and friendship.

Kempner: It really reminded me of playing in a band in high school and how fun that is to have someone to play with and how cool it feels to be able to play music together. There's not very much ego or foresight going in, outside of just hanging out. Having music as a career since I was young sort of robbed me of that experience for a while. All of a sudden, I did have to think about not the business perspective exclusively, but that was part of it. And to be aware of an audience and to be aware of expectations.

Duterte: I feel like the business part is a huge part of our jobs too, because it really connects to the way we even make music. Like you said, when you're young and you get into this sort of stuff, you're really wide-eyed and think that you have to give parts of yourself. You sacrifice certain parts of you that you want to keep sacred in a way, like even having to always talk about yourself, you're always thinking about yourself all the time... I just lost my train of thought so you can keep talking.

Kempner: I know exactly what you're trying to say and what you are saying, which is knowing there's an expectation, knowing there's an audience, knowing that your shit will be listened to and that you will have a team of people who make money off of what you do. That obviously changes creative processes. I guess having that so young, I'm very grateful for that — but it also robbed me of more experiences like this one, I think, which is music just as fun without that expectation.

Duterte: There were no rules to this.

Kempner: Yeah, no rules. Even though we have the label and everything, and there was a lot of expectations — more so for this than other things, in some ways. I think the fact that we had each other made that so much easier and made it easier to forget that. Even this interview, you know, we're just having fun talking about each other, talking about the Sopranos.

Duterte: What is your favorite part of being my best friend and why do you love me so much?

Duterte: I'm just kidding you don't have to answer, that was a joke.

Kempner: It's everything. I love randomly FaceTiming you and you pick up and your face is really close to the camera and we just start laughing and scream. We laugh scream a lot.

Duterte: I love when you really nail all of my moods now. You understand my morning moods. I'll get a little cranky and I'll be like, "I'm hungry! Why don't you do that, why don't you do that?" And Ellen's like, "Okay, we got to get Melina some food. We gotta get some coffee and a bagel!"

Kempner: And then after she finishes eating she has her little black out moment where she gets really tired for a second, and then she perks back up.

Duterte: We love each other.

Doomin’ Sun is out now via Polyvinyl.