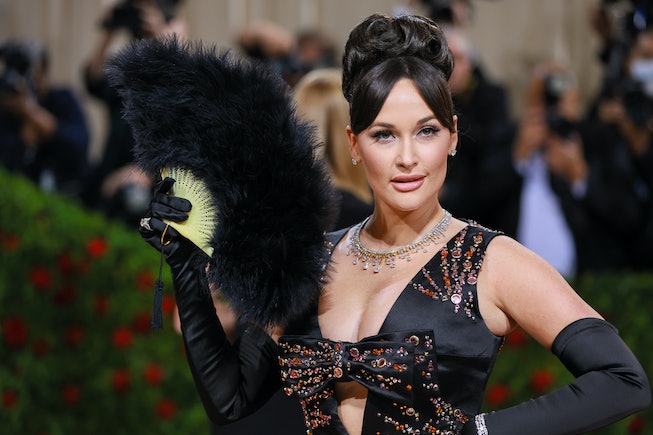 Elvis Presley, the king of rock, hip sways, and hair flips is coming to a screen near you very soon. The late singer's life was full of twists and turns that led to him becoming one of the most influential men in modern history, and now we can watch his story unfold in the musical biopic Elvis.

The upcoming film, starring Austin Butler, was directed by Baz Lurhmann for Warner Brothers Media. Lurhmann’s previous credits include The Great Gatsby, Moulin Rouge and the surrealist cult ‘90s Romeo + Juliet film starring Leo DiCaprio and Claire Danes. Elvis has reportedly been in the works for nearly a decade, and from the looks of things, the feature is well worth the wait.

With just a couple of months left before its premiere, catch up on everything you need to know about Elvis:

The upcoming film explores Elvis Presely’s gripping life story, from his days as a curious church-goer in Mississippi to his meteoric rise to fame in the 1950s, and untimely demise.

Warner Brothers media, who is distributing the film, explained that Elvis also delves into the late-singers complex relationship with his manager, Colonel Tom Park.

After a rigorous casting process, Butler was selected to portray Presley. According to The Hollywood Reporter, the actor beat out a number of celebrities for the role, including Harry Styles, Ansel Elgort, and Miles Teller.

Luhmann explained his decision to cast Butler in a press statement. “I knew I couldn’t make this film if the casting wasn’t absolutely right,” he said. “And we searched thoroughly for an actor with the ability to evoke the singular natural movement and vocal qualities of this peerless star but also the inner vulnerability of the artist.”

“Throughout the casting process it was an honor for me to encounter such a vast array of talent,” he continued. “I had heard about Austin Butler from his standout role opposite Denzel Washington in The Iceman Cometh on Broadway, and through a journey of extensive screen testing and music and performance workshops, I knew unequivocally that I had found someone who could embody the spirit of one of the worlds most iconic musical figures.”

The rest of the ensemble is rounded out by a cast of talented actors. Tom Hanks will play Presley's manager, Colonel Tom Park. Maggie Gyllenhaal will portray Gladys, Presley’s mother, and Olivia DeJonge is starring as the singer's wife, Priscilla Presley.

Elvis Presley's ex-wife, Priscilla, was invited to watch the film before it hits theaters. The actress and businesswoman brought one of her late husband's close friends, Jerry Schilling to the screening, and they were both impressed by Butler's performance.

“The story is about Elvis and Colonel Parker’s relationship,” said Presley. “It is a true story told brilliantly and creatively that only Baz, in his unique artistic way, could’ve delivered.” She then continued to call Butler's portrayal “outstanding.”

“Halfway through the film Jerry and I looked at each other and said WOW!!,” she said. “Bravo to him... he knew he had big shoes to fill. He was extremely nervous about playing this part. I can only imagine.”

Kacey Musgraves is featured on the Elvis soundtrack.

Country singer Kacey Musgraves is a confirmed artist on the Elvis soundtrack. According to Variety, the grammy-winning artist covered Presley’s famous love song, “Can't Help Falling in Love,” which will be included in the film.

Further details about the album’s soundtrack are still under wraps, but the album is expected to be released this summer through Presley’s label RCA. Doja Cat reportedly has a track on the record as well, titled “Vegas,” which samples Presley's song “Hound Dog.”

Thankfully we won't have to wait too long to watch Luhrmann's tribute to the king of rock and roll. The film is set to premiere in theaters on June 24th, 2022. Until then, check out the trailer for Elvis below.

NEXT UP
Culture
The Madonna Biopic Is Being Scrapped
Culture
Scream 6 Trailer Brings The Nightmare To New York
Culture
Loewe’s Howl's Moving Castle Collection Is An Anime Dream
Culture
Kaia Gerber Won’t Stop Until She’s Cast As Patti Smith In A Biopic
Style + Culture, delivered straight to your inbox.