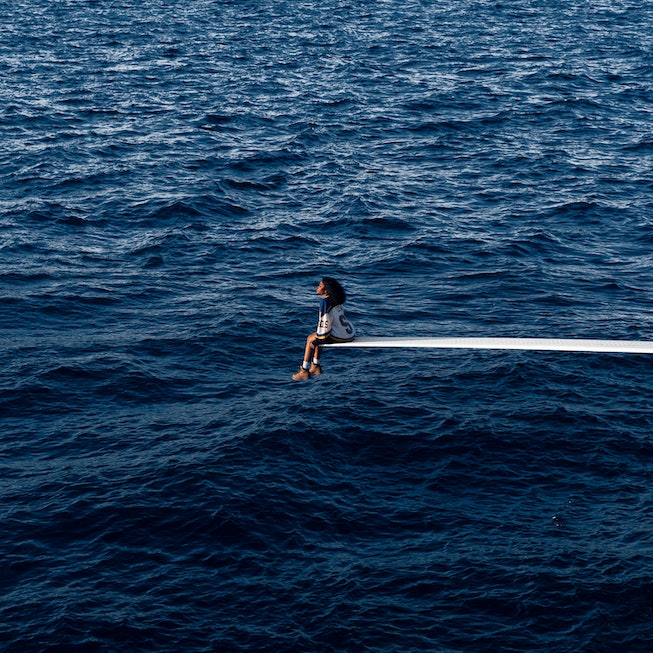 On the cover of SZA’s SOS, the singer is seen floating above an expanse of ocean as she sits on the edge of a boat’s long bowsprit. She said she was inspired by the iconic 1997 photograph of Princess Diana doing the same on a boat in Portofino, Italy, and that she was moved to channel the image’s sense of isolation. “I just loved how she isolated she felt,” SZA said in an interview with Hot 97. “And that was what I wanted to convey the most.”

Isolation is certainly a main theme on the singer’s sophomore album, out now, along with anger, loneliness, malaise, and a general feeling of being lost. The long-awaited project that’s been five years in the making was a difficult one to create for SZA, who’s already (perhaps dramatically) declared it to be her last. In comparison to CTRL, SOS certainly differntiates itself in multiple aspects. It’s 23 songs long, for starters, and the unfurling of its tracks feels as lost and meandering as she sounds on them. But that may just be the point — and a good thing — for the singer, who for five years has been hounded by her fans to turn out something, anything. In response, she’s now giving us a little bit of everything in an effort to hit as many pleasure chords as possible. And indeed, there are many spots across the project’s 68-minute runtime that do just that.

Some of SZA’s most adventurous songs appear on SOS, which dallies alongside its alt R&B core with pop rock, acoustic singer-songwriter, folk, and more. She finds fruitful collaborators among Phoebe Bridgers, and, yes, Travis Scott, and pens up with some of her most SZA-like SZAisms throughout the record.

While the entire album is certainly worth a listen (or several), below, we narrowed down the five tracks from SOS that are essential listening (previously released singles not included).

SZA excels when she’s deep in her own rocky emotions, unspooling diaristic toxic thoughts and worst case scenarios. But, as “Kill Bill” proves, she can also spin a pretty spectacular song out of fictitious events. SZA called SOS an angry album, and “Kill Bill” certainly seethes with it, aflame in shades of vengeance, betrayal, and heartbroken outrage. Over a sinuous melody that’s at turns sly and melancholic, she plots to fatally end her ex and his new girlfriend, despite — or, more accurately, in spite — of the lingering feelings she has for him. But it’s all facade and bravado. In the end, the track is a tragedy that by its final line will make you wonder how SZA can generate such devastation from such simplicity:“I just killed my ex/ I still love him though/ Rather be in hell than alone.”

One Twitter user said that a Phoebe Bridgers and SZA collaboration was just “absurd enough to work,” but in retrospect, their joining forces feels natural and inevitable. The two songwriters have a lot in common as musicians who tend to burrow head-first into the mess of their emotions. Their song together, “Ghost In The Machine,” explodes under the force of their joint malaise, a meditation on wanting to feel normal and human in a world and career path that prefer you to be more like a machine. We get a generous full verse from Bridgers which ends on a chills-inducing wail — another level-up for the sad girl anthem.

Yes, SZA tries her hand out at rock on “F2F” and kind of kills it. It’s more slightly ramped-up Joni Mitchell or soft Avril than anything harder, but the rebellious spirit is all there, especially when she cries on the hook: “I f*ck him ‘cuz I miss you.” There’s a slight dated quality to its melody, perhaps due to the familiarity of the guitar chords on its chorus. Overall, it’s nice to hear SZA experiment on something more organic and exuberant-sounding. Even sad girls deserve a day outside.

Right on the heels of “F2F” comes “Nobody Gets Me,” a song that I’ve seen described as everything from Hannah Montana to Mazzy Star. It’s all to say that this is yet another style we haven’t heard from SZA before, but she executes it beautifully by contrasting its perhaps more elementary, strummy melody with some truly heinous, spectacular lyrics. “You were balls-deep, now we beefin'/ Had me butt-naked at the MGM.” Sometimes SZA can come up with some truly hilarious lines, like taking an unsparing mirror to the most pitiful parts of reality — but she always brings it back to the unsparingly raw and earnest. “How am I supposed to let you go?” she wonders, breaking the funny spell on its chorus. “Only like myself when I'm with you.”

On an album roiling at the brim with anger, sadness, insecurity, and loneliness, it’s a gem to get a song like “Open Arms,” a fluttering, weightless ballad about welcoming someone in rather than icing them out. It’s also one of the album’s most interesting cuts as the only song that features the stern but kind voice of Norma, SZA’s late grandmother who we became so familiar with through CTRL. Despite SZA singing about getting backshots and being a ride or die for life, one can’t help but feel Norma’s presence linger on the track as someone to which SZA is also directing and expressing her intense devotion. When her grandmother passed in 2020, the event, SZA said, sent her into a deep, deep depression. “Open Arms” is the one gap in the storm clouds on SOS, and Norma’s presence on it makes it all the more significant.