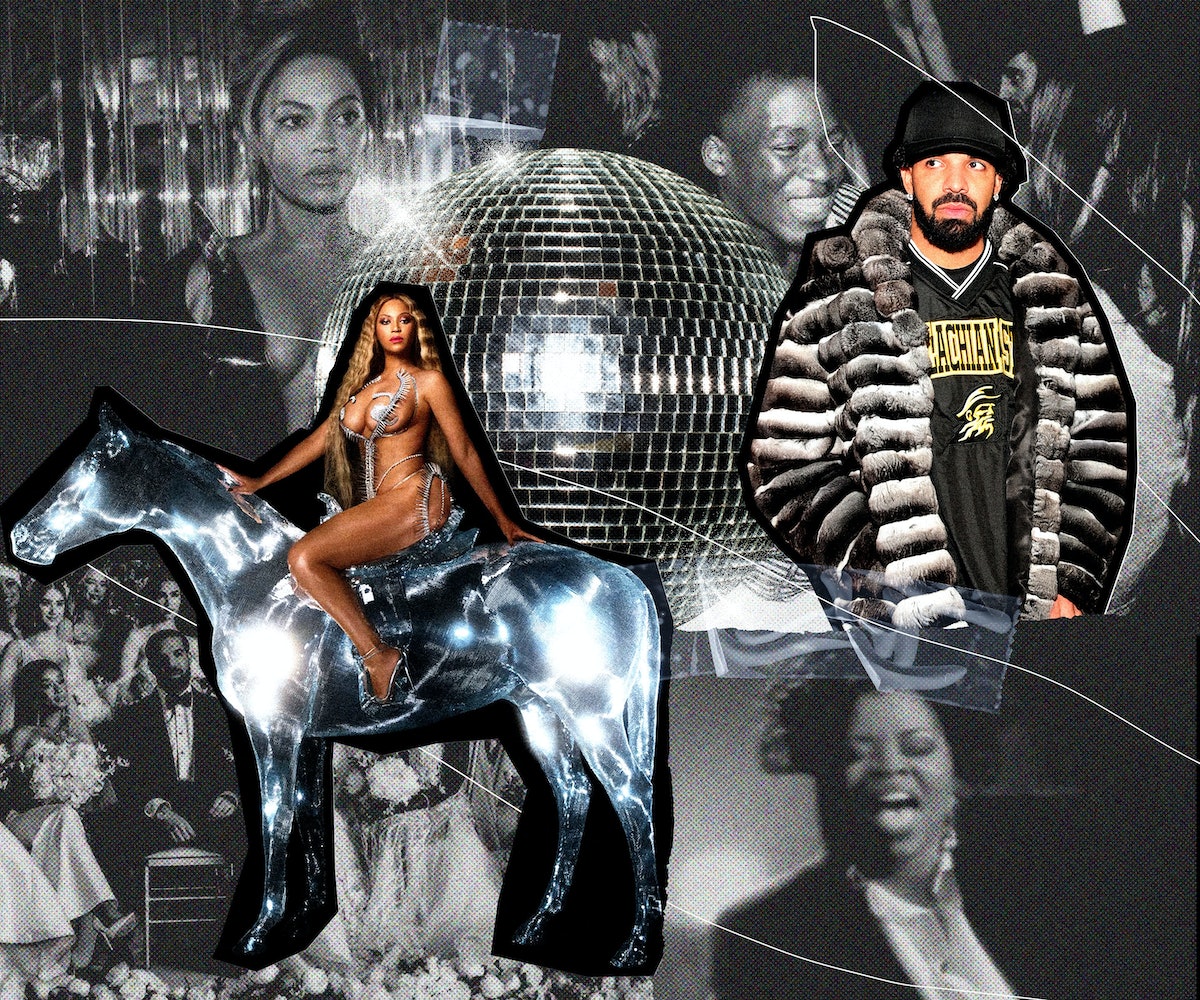 In the ’70s, disco was born as a cultural survival response: Victims of racial injustice and homophobic ostracism needed a space for self-acceptance, celebration, and catharsis. Inevitably, major labels cashed in on the boom, exploiting and diluting a subculture that acted as a coveted space of ecstasy and, for some, was oversaturating the airwaves. On July 12, 1979, enraged rock radio host Steve Dahl led the savage destruction of hundreds of disco records before a Chicago baseball game. It turned into a riot and, over time, became known as “The Night Disco Died.”

Only disco didn’t die (though whatever was being pushed as an easy money grab by labels definitely did). It evolved, giving way to house, a genre that was strengthened by disco’s celebration of gayness and Blackness and was urgently imbued with that same survival instinct to keep moving. More than 40 years later, the pop charts have found themselves in a similar cycle: embracing the re-emergence of dance music amid a world that’s once again trying to figure out how it wants to trek forward.

In 2022, house music broke into the charts to revive us with Beyoncé at its forefront. Her long-awaited seventh studio album, Renaissance, not only represented a new chapter for one of the world’s most important artists, but became a crucial cultural marker for where we are nearly three years after COVID-19’s introduction. After two years inside, or as one might say witnessing the verge of societal collapse, Renaissance was born out of hunger to move forward. “Creating this album allowed me a place to dream and to find escape during a scary time for the world,” she explained. “It allowed me to feel free and adventurous in a time when little else was moving.”

First single “Break Your Soul,” with its Big Freedia sample, offered a preview of the lesson that was to come. As the bounce pioneer demands on its opening lines: “Release ya anger, release ya mind/ Release ya job, release the time/ Release ya trade, release the stress/ Release the love, forget the rest.”

Letting go of time’s constraints and a normalized rigorous schedule is a commandment that Beyoncé preaches throughout Renaissance. She nods to the great resignation — workers who quit their jobs when labor force pitfalls reached an all-time high — with the lyric, “And I just quit my job/ I'm gonna find new drive/ Damn, they work me so damn hard.” And its following lines, “Work by 9/ Then off past 5/ And they work my nerves/ That’s why I cannot sleep at night,” demonstrate how our understanding of time and how we’re structuring our days need to be rehabilitated.

If the pandemic’s first year made us feel isolated and stopped, the second was a scary inconsistent pull back to normalcy. These harrowing events made so many realize time is our most important asset, one that we need to be careful doling out to others and be protecting for ourselves. Renaissance captured this new relationship of how we spend and sweat away our hours, its compulsive repetition of house music emphasizing that creed.

“It feels bigger than her, one of today’s most in-demand artists reveling in her schedule’s gap. This acknowledgment is a will to live in a collapsing world.”

A month before Beyoncé was running drills on the dance floor, Drake was having his own house music moment. On his June surprise album, Honestly, Nevermind, the most poignant moments are when he’s at war with time. On “Falling Back,” he’s resistant to time’s obligation to heal and transform heartbreak’s gashes into new skin or scars. “Time is just killing,” he sings numbly, expressing how wasted time can feel like staring at an open wound, waiting for it to close. “Time isn’t healing, wait/ Time is revealing.” “Falling Back” nearly reaches five minutes, built on subtle metallic clinks, spacey synths, underwhelming high hats, and a blunt 119 BPM. It’s like spa music for the dance floor — supple, hypnotic, and sensual. Alongside these vortex-opening rhythms, Drake is trying to find his emotional pace.

Elsewhere, he can’t slow down, wants more time, or gets lost in the moment moving too fast. “With no doubt/ I’ll give you all my time,” Drake sings on the bossa nova-tinged “Ties That Bind.” On “Texts Go Green,” he tries to make sense of time while lost in a toxic bind, realizing he has to protect what he has left. “This time I have left/ Cannot be wasted,” he croons self-seriously. On one dismal line he admits: “I feel like everything these days leads to nothing.” More than a hopeless take on hookup and dating culture, it’s a nihilistic stance that mirrors our current existence and relation to time.

It’s not a coincidence that Renaissance and Honestly, Nevermind, both albums fixated on moving forward, uses house music as its framework. House music locks you into the rhythm. It’s a genre that thrives in real time, designed to keep you on the dance floor as tracks transition into one another with the ease of a chameleon changing its pattern. Infinite rhythmic bliss, where there’s no arc like a regular pop song, leads to a never-ending dance party. The only sense of time is gathered through the amount of sweat pooling on the floor.

Like Renaissance, most songs on Honestly, Nevermind transition seamlessly into the next with each layered element — from jazzy piano jabs or propulsive drums — locking into step and then disappearing like a level of Tetris. But these projects are more than recognition of a legendary genre and a pandemics-delayed invitation to the bustling dancefloor. “We ain’t got time like we used to,” Bey sings on “Virgo’s Groove,” as she beckons her lover. After two years lost in a world that feels increasingly unpredictable, time is more precious for everyone — young and old. “I got time today,” Bey joyously declares on the third verse of “Cuff It.” It feels bigger than her, one of today’s most in-demand artists reveling in her schedule’s gap. This acknowledgment is a will to live in a collapsing world.

In 2022, it wasn’t only major pop stars marrying their conflicts with time with house music’s nature to evaporate ticking clock-related stressors. New Orleans’ Special Interest brought house music back to its punk roots. On the no wave band’s working-class anthem “Foul,” the quartet list the qualms of the everyday human breaking their back to barely survive under America’s capitalist agenda. “How do you measure the time you’ve lost,” they repeat on the combusting track. It’s their final wake-up call as the thumping beat stops and guitar squeal echoes out. (Their other affecting connection of deep house to the loss of time appears on “Herman’s House,” the powerful ode to Black Panther member Herman Wallace who was unjustly imprisoned for three decades and locked in solitary confinement.)

U.K. musician Fred Again.. also experienced a wild surge in popularity this year as listeners crowded around his emotive, bricolage-like house creations pieced together from real audio snippets pulled from his life or online. His albums are named after the specific time period during which he created them — his latest is titled Actual Life 3 (January 1 — September 9 2022) — resulting in a literal musical documentation and interpretation of the passing of time, a reconciliation of these past blurred years created in his own rhythm.

House music’s ability to blur time is a canvas for artists making sense of chronological discombobulation. Genre pioneer Frankie Knuckles was known for looping the best parts of songs and cutting the sh*tty ones, building terrain begging to be explored through movement on the dance floor. “I almost couldn’t quite figure out if there were songs at one time,” Shanahan said about experiencing Knuckles’ sets. “Sometimes it was this sort of soundscape.” House music’s return to the charts unveils that its superpower of rhythmic hypnotism can create a new sense of biological tempo when ours has been warped and turned nonsensical.

Three years after 2020 and it feels like most of the world has somewhat reached a solid new normal — we’re traveling more, gathering more, and rebuilding our lives. With the recent past looming like a ghost and a still immense sense of uncertainty for the future (will there be another sociopathic election or impending recession?), house music’s new form demonstrates that there are still sanctuaries that can be found, created, nurtured. It’s always been a revitalizing force, birthing new worlds and pockets of time in one that feels enormously splintered.