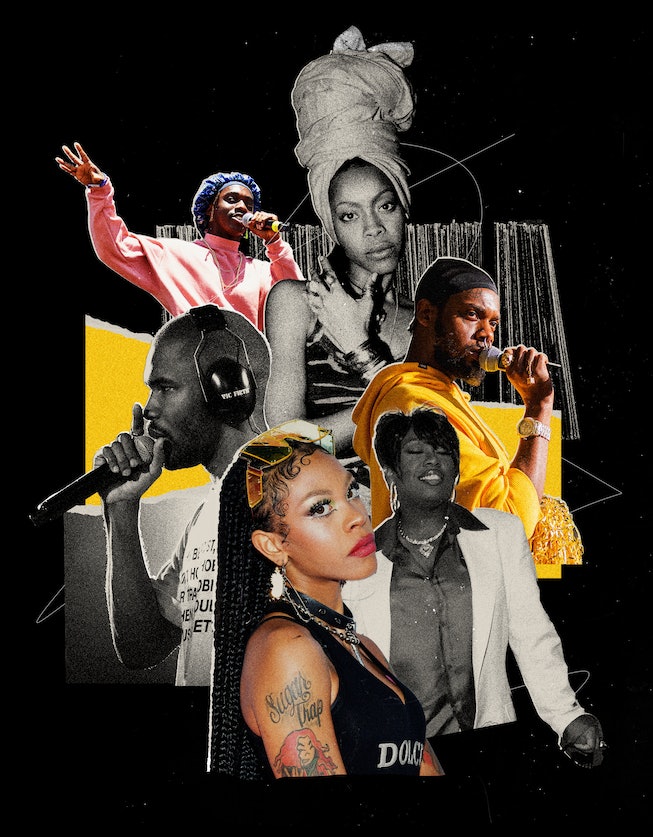 In honor of Black History Month, NYLON reached out to some of our favorite Black musicians to share an album by another Black artist that's impacted them, either personally or artistically. Not because it could fully encompass or articulate the impact of the Black musical canon, but because the small process of remembering and sharing can also act as a powerful form of archive.

The responses we received are varied in genre and era, highlighting the sheer vastness of Black musical history. From Corinne Bailey Rae's graceful neo-soul, to Frank Ocean's modern classic channel ORANGE, to Treemonisha, one of the world's first Black operas about a young woman growing into a leader in her community. And in between all of that, many more works that have touched and molded the art being made by Black artists today.

Read on for 19 Black artists on an album by a fellow Black artist that touched their lives.

"I don’t really know how to articulate what that album did for music and for me as a whole. I think it created a space for the storyteller and the more enigmatic persona again. To me, it was inspiring because it was [Kendrick's] own personal journey, and knowing of his stuff prior and since then, he's released nothing but incredible music. Kendrick’s good kid, m.A.A.d city taught me that it was okay to always give an honest piece of myself in my art."

"My album of choice would be Mama’s Gun by Erykah Badu. From start to finish, this album holds so many memories for me and how my musical taste was shaped. Her variety and consistency made this album so much fun to come back to. Also her collaboration with Roy Ayres felt like a sweet balance of musicality and raw intuition, which always feels like a perfect storm in the context of timeless musical expression."

"Missy Elliott's characteristics are very innovative. She's a big inspiration because she's always super fly, and she does a lot of stuff outside of the box. I feel like it opened a lot of people's minds, especially in the hip-hop culture, because her style is something that would be more like on the pop side. She embraces weird, and I love it. What made everything come together to me was the whole aesthetic besides the music — how she dressed depending on the song, what's going on in the video as far as what type of video is it, it being real futuristic. If she is having something sad, but still making it turnt up. It's just her aesthetic overall, and her confidence."

"I didn’t really listen to it much as a kid, but rediscovered it later and it’s such a classic. I’ve never seen anyone walk the line of singing and rapping so effortlessly. She approached heavy topics and then made them into beautiful ballads without sounding preachy. She was a mouthpiece for that generation and many generations to come. Just a blueprint. Very inspiring."

"This album is special because it speaks to humanity. The vibrations are high and that of positive empowering messages, I think Bob Marley is one of the only artists that can reach everyone's heart because of the truth and love behind his lyrics. Big up jah rastafari.

[On his song "Wake Up And Live," he sings,] 'Life is one big road with lots of signs/ So when you’re riding through the ruts don’t you complicate your mind/ Flee from hate, mischief, and jealousy/ Don’t bury your thoughts and put your visions to realities, yeah!!'"

"I listened to this album in the car with my mom for basically all of 2007 (alternating with Alicia Keys’ third album, As I Am). Alicia Keys is the reason I started doing music, but Corinne Bailey Rae was one of the earliest instances I can trace to the kind of music I make now. Everything about this album was effortlessly feminine, romantic, intellectual, spiritual — I can’t possibly come up with enough positive adjectives for it. She demonstrated a model of Black womanhood I had never seen before in popular media, one that I find myself trying to emulate even now."

"Telefone by Noname is by far my favorite album that dropped in 2016. Noname has always been unapologetically Black and also a prominent voice throughout the BLM movement. Her lyricism is timeless and uncompromising — often collaborating with many underground/influential artists from her Chicago scene."

"This album really means everything to me without sounding too cliché. Corinne Bailey Rae is one of the reasons I became so into music and playing the acoustic guitar. Being a Black woman, playing acoustic-soul and from the UK, she was the first artist I really saw myself in. She broke down barriers in music and style with her effortlessly soothing tone and natural beauty. I just love her and this album so much, and I don’t think that feeling will ever go away."

"On soil, serpent combines the valorous repetitive minimalism of Julius Eastman and the mindfulness of Alice Coltrane, with a deep understanding of the traditions of R&B and gospel, free of the oppressive and opportunistic forces of Christianity, Islam, and capitalism that often disrupt the true trajectory of Black creativity. I developed a habit of beginning and ending my day with this album for nearly a year, and I am still tickled by what details of life he chooses are worthy of song. "

"Navigating multiple identities, this epic and casual feeling. He feels like a star but also a solid foundation to the artists featured on this album. I just love to see how strong he interacts with collaborators. I sense the admiration he generates but also gives; to me this is a sense of fluidity and openness that I profoundly look for. He accompanies and disturbs me in the most beautiful way. 'A Greater Love' & 'Kerosene' on repeat anytime, all the time."

"This album is a U.K. classic, especially for girls like me who are from where I’m from. When I first listened to that album, it was years after it had been released and I had become a teenager, so it felt so relatable. It was R&B but from the U.K. about experiences that young girls from the ends went through. I loved the messages behind the songs, about knowing your worth, and believing in yourself. It was important for me to hear those things. Years later, having Ms. Dynamite on my second EP was a dream come true."

"When we think about GREAT ALBUMS, very complete albums that can be played through all the way with no skips. Every song has SOMETHING it’s saying directly to the audience, but always is mixed and produced so well. I study the spacing on vocals on this album and creating a sound that goes perfectly with the artist. I think of this album by Erykah Badu. This is VOODOO, MY DARK TWISTED FANTASY, THRILLER, ABBEY ROAD, OK COMPUTER are some of the best albums ever made."

"When I heard this album for the first time I was in the car. And all I wanted to do was hurry up and get home so I could dance to the whole thing with no interruptions. That album means so much to me over the years because I made so many bad b*tch memories with my besties while that shit played in the background."

"I remember being in high school on the way to fall camp listening to Awaken, My Love! the day it dropped. Gambino really forced me to be open minded because I was expecting a rap album. I had never heard anything like what he created on that project. It's a genre-less, timeless body of work. I hope that my next project can match that energy in my own way."

"I constantly think about Scott Joplin’s opera, Treemonisha. He finished writing it in 1910, but died before he could see it fully staged. It was performed for the first time in 1972. The music is majestic, and I’m awestruck by the Black naming tradition on display here. The protagonist was named Monisha as a child, then renamed Treemonisha because of her affinity for a nearby tree."

"Whats the Time Mr Wolf is one of those formative records for me that might've changed the entire course of my life had I not discovered it. I found this record pretty early on in middle school and remember how earth-shattering it felt. Front woman Shingai Shoniwa was something I never seen before, aside from the fact that she was Black and fronting a punk band, but she was the first punk artist during that time that was equally as glam as she was punk. She looked like a literal fashion model, but had an amazing and soulful voice she wasn't afraid to use as a weapon. She could belt like Whitney Houston, but snarl and scream like Karen O, and she had a beautiful head of textured and unapologetically natural hair she styled in the most beautiful ways. I'm forever lucky for the influence of Shingai and the Noisettes."

"This is one of those monumental albums that redefined what I thought was possible for music. Ishmael Butler’s incantatory flow made a huge impression on me. At the time the album was released (2011) I hadn’t even considered or dreamed of making music, but I was beginning to explore poetry and lyric writing. Hearing this album opened up a portal to understanding the impact of words released through chant, like on the track "Are you...Can You...Were you..?" and the revelation that maybe music could be the right medium for my ideas. Shabazz Palaces deserve more flowers now, as often is the case with Black musicians that are pioneering in their craft."

"My favorite album would have to be Frank Ocean’s channel ORANGE. That body of work took me out of the norm. It had me thinking differently about song writing. The song titles were magic and the production was top tier. His soul was sprinkled all through the music, the way he moves people with immaculate, incredibly powerful vibrations ('Crack Rock') and frequencies. 'Pyramid' feels like a story I haven’t told yet but lived many times. That album truly impacted me as an artist. Frank Ocean is our living legend and our Black Sinatra wit a twist. 10 out of 10 on that project."

"I just loved it. I loved the fact that she was so multidimensional and it wasn't just one thing. It wasn't like she was just rapping. She was doing pop shit, like, 'Right Thru Me,' that was like some R&B type shit. I was just in awe. I started making music at 13, and for this to come out when I was 14, it really kind of shaped the way that I saw myself as an artist. I didn't want to be boxed in because I'm listening to this, and she's not boxed in at all. She's doing everything and anything and I started to create more. I started to create albums as a teenager. I have five albums from the ages of 13 to 17 that just will never come out but they're all genre-less. Every time I would put them in iTunes just for me, the genre would just say "Tate," and I feel like a lot of that energy ... just feeling like I could do whatever I want came from listening to Nicki Minaj, and that first project. Pink Friday was very influential for me.

"I feel like at the time she had a lot to prove. She'd been on Kanye's song, and all these other super huge looks, but didn't have an album out yet. And then this was like, alright. Let me put on my big girl shoes and my long legs and step on these bitches. If you wanna hear what it sounds like to just completely be yourself and do it in such an inspiring way, it's really just bad bitch energy, go listen to Pink Friday."