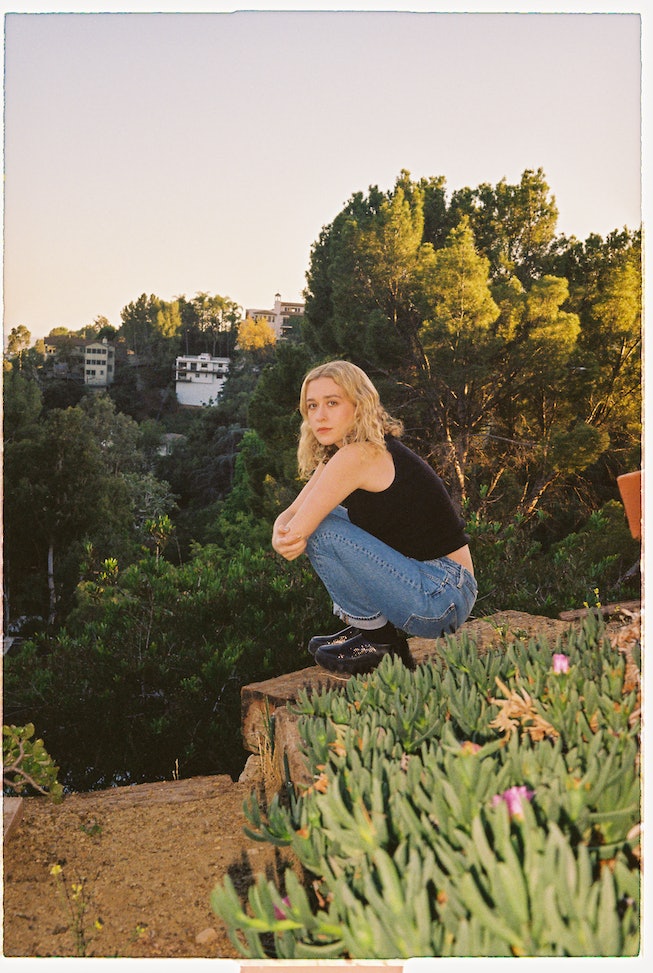 There are few artists who can grip you with the first song you hear, but in three minutes and 44 seconds, Blondshell makes her presence known. Just try not to immediately hit repeat.

Blondshell is the stage name of LA-based singer/songwriter Sabrina Teitelbaum. Born in New York City, Teitelbaum was drawn to the confessional nature of such musicians like Tracey Chapman, Elliott Smith, and Patti Smith. On her very first single, “Olympus,” premiering on NYLON below, she joins their ranks with a raw take on heartbreak and addiction. “I wanna save myself you’re part of my addiction/I just keep you in the kitchen while I burn,” she sings over unrelenting slinky guitars. In her forthcoming music, expect similarly cutting lyrics on topics such as coming to terms with her queerness, becoming sober, and being saved. (The upcoming “Veronica Mars,” she laments of adulthood through the lens of the hit teen drama, singing, “Veronica Mars, 2000 oughts/Logan’s a dick; I’m learning that’s hot.”)

Here, Blondshell talks to NYLON exclusively about her first single and what is still to come, plus listen to “Olympus” below.

I’m in my apartment in LA and my friend is about to come over and play guitar with me. I just ate a carton of blueberries and I’m about to take off my eye makeup. It’s pretty hot in LA and I feel like eye makeup doesn’t go well with the heat.

What is the story behind "Olympus?”

I went to a session in February of 2020 and was experiencing a really bad heartbreak at the time. I wrote “Olympus” about the experience of falling in love with someone and knowing that it wasn’t going to work out while still being in love. When I showed the demo to the producer I ended up working with he was like “Okay, do you have any more songs like this?” because I think it’s what he had been waiting to hear from me.

I went to see The Rolling Stones with my dad on their A Bigger Bang Tour in 2005. I remember them opening with “Start Me Up” and the stage was set up like outer space (hence “a bigger bang”). It was insane and my mind was completely blown. I became obsessed with their album Tattoo You after that show and it’s still one of my favorites.

What's the last album you played in full and enjoyed, and why did you like it?

Yesterday morning I went on a walk and listened to Ethel Cain’s “Preacher’s Daughter.” Her voice is so beautiful and the songwriting is so free. I was so really moved by the song “A House in Nebraska” and it made me very emo about the people I love.

In my free time I like to tell my dog how smart and funny he is. I also like to read a lot of short stories and nonfiction. I’m trying to learn how to cook and I bought a cookbook called “I Can Cook Vegan.”