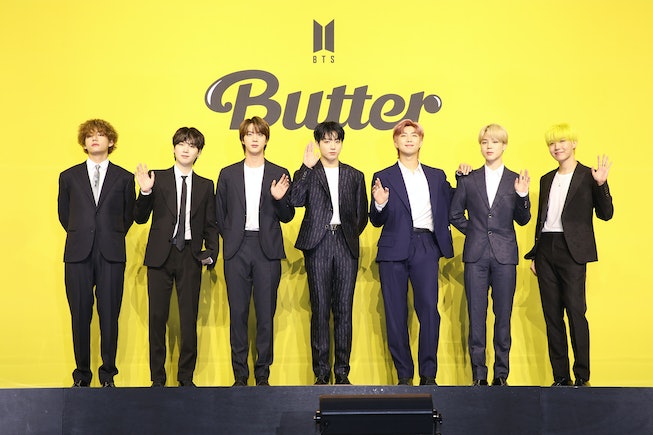 BTS is back with another feel-good bop; "Butter" promises to melt away all of your worries, just in time for summer. Shortly after unveiling the music video for their second English single — which accumulated 10 million views in under 13 minutes — the Korean megastars attended a global press conference in Seoul, where members RM, Jin, Suga, J-Hope, Jimin, V, and Jung Kook spoke candidly about the release, their future ambitions, and their pop legacy.

It's been a little less than a year since "Dynamite" propelled them to the top of the pop pantheon. An addictive crossover English hit, the song not only became the group's first No. 1 on the Billboard Hot 100, but it also earned BTS a historic and coveted Grammy nomination, and BTS are keen on doing it all again with "Butter." When asked if the group's latest track was another attempt at Grammy gold, Suga, the group's oracle of sorts, replied that it wasn’t not part of the plan. “We continue to want to receive a Grammy award,” he said. “'Butter' will be another try and I hope it can have good results.”

Leader RM added, "We are thinking of the Grammys. We will try to do whatever we can to set that as a goal and go towards that goal."

As for whether they think "Butter" has the potential to top the Billboard Hot 100 like its disco-funk predecessor, Suga displayed a characteristic level of confidence. "It's a very fun song," he said. "Summer is here, so we hope you can really have fun listening to this song. Number one? I think we can do it. We will do it."

When "Dynamite" dropped last summer, there was a need to contextualize its existence within the group's dynamic discography: it's a clever subversion of Western pop songs, a brilliantly manufactured trojan horse sent to U.S. radio to one up industry gatekeepers; it's free therapy! All of these things are likely true. But what's often lost in these justifications is the fact that "Dynamite" is just a really good pop song. And "Butter" is a really good pop song.

Whereas "Dynamite" is bursting with relentless energy and shameless sincerity, "Butter" is smooth and flirty. It's "got the right vibes," as Suga raps, for a summer night on the dance floor or a confident strut around the block in the sweltering heat. "Side step, right, left to my beat," they sing on the sticky chorus. "High like the moon, rock with me, baby."

That breezy vibe was intentional. Jimin said the group wanted to "prepare a song for easy listening," adding that the track is "a very cute song, sort of [like] a confession. It's cute and maybe a little bit charismatic. We tried to imbue all of these feelings into the song." J-Hope added that some of the performance elements are a bit mischievous to emphasize the track's playfulness. Jin joked he and youngest member Jung Kook — whose (fake?) eyebrow piercing sparked worldwide trends on Twitter — put their heads together, literally and figuratively, to make the "A" in ARMY during one bit of cute choreo.

"There’s a part where the members are each dancing in an elevator set, expressing their feelings,” V said of the song's music video. “We ad-libbed them — they’re freestyle dances we came up with on set and we chose how we could express ourselves best."

“In this industry and in this genre, what kind of legacy can we leave? How do we leave a meaningful legacy?”

RM co-wrote "Butter" alongside Rob Grimaldi, Stephen Kirk, Ron Perry, Jenna Andrews, Alex Bilowitz, and Sebastian Garcia. According to the 26-year-old rapper, "Butter" was selected among "many, many songs," and that the guide was already complete when they chose it, so he mainly wrote and worked on the rap verses. "I was lucky to be able to participate in making this song," he said. "Me, Suga, and J-Hope, we all have different colors and characters, so I tried to highlight these differences." Jokingly, Suga, known for his more biting lyricism, added that all of his lyric suggestions were "immediately dropped."

But Suga became more reflective as he spoke of how the past year of pandemic life has influenced his own creative process. "There were moments, of course, that were difficult and painful for us as well,” the wordsmith said. "For me, in the past year listening to our music, I received a lot of consolation and healing. It made me realize this is how people feel when they listen to our music, so the way I see music and my values and how I feel about my work changed a lot during this process."

With this newfound perspective comes a deeper sense of responsibility to "make even greater songs," he concluded. Dancer J-Hope echoed this sentiment later in the press conference, saying, "Going through 2020, I realized music has an enormous power.”

It's a weight RM feels as well, especially as BTS are approaching their eighth anniversary as a group on June 13. Eight years into a historic career, what does the world's biggest pop act talk about behind closed doors? "The biggest topic is our future," RM said. "In this new normal, what is our function, why do we exist? Grammys are important, but as BTS what are the values we should pursue? In this industry and in this genre, what kind of legacy can we leave? How do we leave a meaningful legacy?"

Jung Kook added he's "been working on my own things and my own songs," while Jimin and V both hinted at new BTS music to come. "We've been working on our album," V said, a mop of freshly permed curls atop his head. "This is a hairstyle I can probably do once in my life, and I feel like I've unveiled it a little bit too soon," he joked. "It's something I've always wanted to do." Jin added, smiling, "For the past few days we've been talking about how cute it is… he looks like a poodle."

Now as they look ahead to 2021 and beyond, BTS is pushing themselves to even greater heights, on their own terms. They don't have to explain themselves. Are they K-pop, or not? That's not for them to decide. ("K-pop is not so much a genre, but it should be categorized as an industry," RM, however, did say.) “Talk is cheap,” anyway.