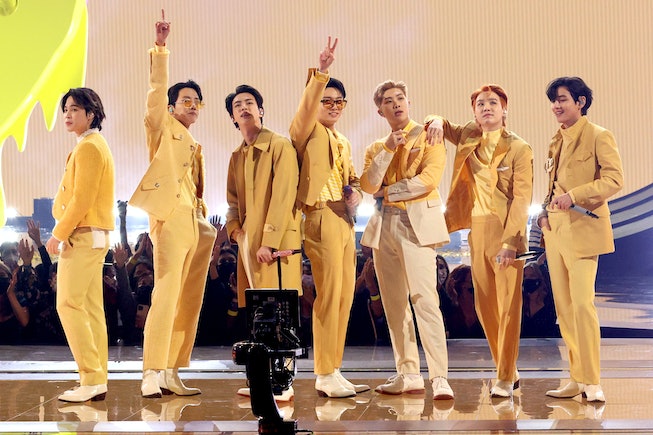 There's a specific allegory that RM likes to use to describe BTS. "It's like the seven of us are on a boat, looking in different directions, but going the same way," he says. On Proof, the group's latest album, that image becomes ever so clear. The sweeping anthology traverses the Korean superstars' work, from their scrappy origins to their history-making hits, weaving together their discography like a half-finished fable. “Yet To Come,” the group’s sentimental new single, is its symbolic turning of a page, a way to reassure their millions of fans that things are changing and that's okay. But what happens now to the boys who, against the odds, got everything they wanted and more? Where can they go from here?

You already know the next part. On June 14, the group announced their next direction as fans readied themselves for the next stage of BTS' career (and as military enlistment looms). Members RM, Jin, SUGA, j-hope, Jimin, V, and Jung Kook revealed, on their own terms, that they would be focusing on solo endeavors for the time being. It didn't take long for the news to spread outside of ARMY circles. As outlets around the globe began reporting on the group's "indefinite hiatus," it caused their Korean entertainment label HYBE to lose $1.7 billion in market value overnight. HYBE swiftly issued a statement, explaining that while the members are focusing on their solo projects, "BTS are not taking a hiatus." Meanwhile, leader RM took to Weverse, their fandom community platform, to express his own frustrations over how their quotes were being distributed without the full context of their circumstances.

From an outsider's perspective, you may see the biggest pop act in the world announce a (much-deserved) break from group activities and wonder why? But for fans and keen observers, who have watched the members of BTS put the group before everything else, even their personal artistic development, it's a necessary step for the group, its members, and their future together.

What initially launched BTS into fame was their ability to speak to people. Their early songs empathized with the struggles and concerns of an entire generation, and offered solace through their music. During a pre-taped special for the group's ninth anniversary, the group talked openly about feeling like there was nothing left for BTS to say. "I started music and BTS because I had a message for the world," RM said. But at some point in the last two years, following the release of a string of English singles, including "Dynamite" and "Permission To Dance," the rapper realized that the group had changed. “I didn’t know what kind of group we were anymore,” he said. For RM and SUGA, the group's primary lyricists, the constant churn took a creative toll. "Whenever I write lyrics and songs, it’s really important what kind of story and message I want to give out, but it was like that was gone now," RM said. "I don’t know what kind of story I should tell now… Right now, we’ve lost our direction, and I just want to take some time to think."

To get that direction back, the group will focus inward. The members will pursue their own projects, and after nine years of racing forward together, they’ll have the time to just exist on their own. For every member, that path looks different. Pop crooner Jung Kook is featured on Charlie Puth's next single; rapper j-hope is bringing his magnetism and joie de vivre to the Lollapalooza stage in July, becoming the festival's first Korean headliner; singer Jimin is taking meetings with producers; oldest member Jin seems destined for a successful variety show career; multi-hyphenate V, who's charmed everyone from Lizzo to Jon Batiste to Olivia Rodrigo, has been teasing a solo album for years, but first he'll star in his own variety special alongside his celebrity best friends Park Seo-joon, Choi Woo-shik, and Park Hyung-sik. Meanwhile, sharp-tongued rapper SUGA, who produced and featured on PSY's celebratory new single "That That," is working on his next album under his hip-hop moniker Agust D.

As for RM, the group's diplomatic leader seems to be at a personal and professional crossroads. In a recent interview, he spoke candidly about this feeling. "I hit this phase where it’s impossible for me to know what the group is like or even who I am that clearly," he said. "So I think I need to find inspiration from people around the world." The rapper, who has two mixtapes under his belt, seems to be searching for something. It's something akin to meaning and purpose, heady concepts that BTS as a group has turned to for inspiration countless times. The songs on Proof are a testament to this. On 2019's "Intro: Persona," RM pondered, "Who the hell am I?" Early tracks like "No More Dream" and "N.O" bristled at societal expectations. "A good house, a good car, will these things bring happiness?" RM wondered on "N.O," then just a 19-year-old kid. Nearly a decade later, RM has found his answer.

The members of BTS live in multimillion dollar homes in some of the wealthiest neighborhoods in Seoul. Together, they own a fleet of luxury vehicles (except for RM, who pointedly does not even have his drivers license). Their success has generated billions worldwide. Yet, it’s clear material gains and global fame haven't fulfilled their artistic souls. There's a desire to do more, to say more outside of the shadow of their own mythos. "That uncomfortable title we were given one day," SUGA raps on "Yet To Come, "we are still abashed by being called the best… I just love music."

In that regard, how long can seven individuals looking in different directions chart the same parallel course? Everyone's journey is different. In the spirit of BTS, of reaching inward and soul-searching, embarking on solo endeavors is the only way for them to move forward and still salvage what they have as a group. During their pre-taped anniversary dinner, SUGA spoke candidly about the creative burnout he's experienced. "I have to talk about something that I really feel, but right now, I’m just squeezing it out because we have to satisfy people’s wants and the listeners," he said. "It’s so painful, but that’s just how this job goes.”

This job as an artist, as a K-pop artist forged in the fires of the notoriously demanding idol industry, is a grueling one. The problem with "the whole idol system," RM reasoned, is that it rarely gives artists "time to mature…there’s no time left for growth." BTS can't grow as a group if its members are frozen in amber. For the past nine years, they've made decisions by majority rule; now, they get to advocate for their own best interests.

It's understandable that some fans — especially those that experienced One Direction's 2015 "hiatus" — are concerned about what this means for BTS' future as a group. But plenty of Korean acts have weathered overlapping enlistment periods and long hiatuses through solo promotions and unit projects. If anything, this means fans can expect even more content as the members branch out into various fields of music, fashion, art, and entertainment. Think of it as making seven times the impact.

It's said that sailors would often use their knowledge of the stars to navigate uncharted waters; Proof is the constellation of BTS’ past. They're seven stars, each dazzling in their own way, connected by some cosmic force. It guided them through life's roughest waves and illuminated the way to clearer, calmer seas, and it helped ARMY get there, too. Now, as they embark on their solo journeys, the darkness ahead has never looked more inviting.