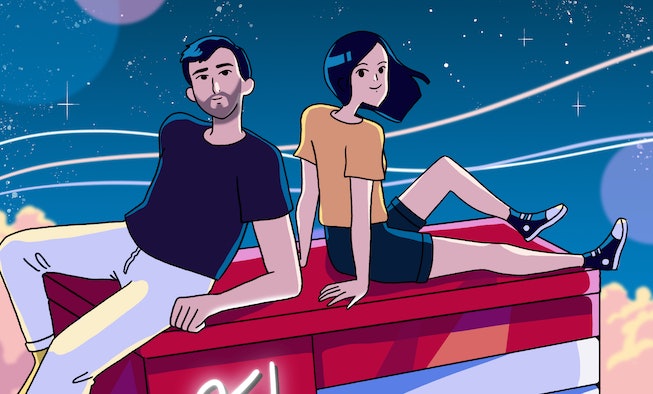 “I feel like I've been creatively living in a quarantine for a really long time,” Michelle Zauner says over the phone from her Brooklyn apartment. Like most of New York City, the Japanese Breakfast front-woman has been confined indoors since mid-March, but she suspects that her mind has been locked in one-mode for much longer than that.

For the past few years, Zauner has been juggling three big projects: writing her upcoming memoir, Crying In H-Mart (due out in 2021), composing the soundtrack for forthcoming indie video game Sable (also out next year), and writing the third Japanese Breakfast album. Somehow, in between all of that, Zauner found the time to start BUMPER, a new project with her friend and neighbor Ryan Galloway of the rock group Crying. Their first EP, pop songs 2020, dropped Thursday, a surprise quarantine treat.

Four breezy tracks of restless and retro-sounding pop, the project is an instant mood-lifter, like taking a shot of the zippy energy found in arcade video games — incidentally, another shared hobby of theirs. On release day, NYLON caught up with the duo to learn how the project came together, what they've been up to during quarantine, and the music they've been listening to, from K-Pop and disco, to bad workout music.

How have both of your quarantines been going? What have you been up to?

Galloway: We started working together in July? In June?

Zauner: Yeah, I think so.

Galloway: And before that, you know my life really started when Michelle and I started working together because I don't remember anything before that. I think I was playing video games and thinking that I filed my-

Galloway: Yeah, but I wasn't playing Tekken at the moment, I've been playing a lot of Valorant...

Zauner: But it was really funny because every time I went to Ryan's house before, you had Tekken tournaments playing on the TV.

Galloway: It's like boxing for people who have been quarantining their whole lives.

Galloway: But yeah, this quarantine has just been gaming, and trying to figure out if I filed my unemployment correctly — I did. And then, we've been working on this thing, like June/July and some of August.

Zauner: I am not...things are not going well for me like everyone else [Laughs]. I think I'm just such a busybody and I'm trying to learn how to... I don't know, disengage from capitalism and doing a lot of work to figure out how to untrain my brain from not working all the time, or like, just appreciating the process and craft of things without immediate outcome. For a while I was finishing up my book which is going to come out next year. It's called Crying In H-Mart. I finished the final draft of that. And I have been working on soundtracks for an indie game called Sable. That will also release in 2021. And yeah, just been working on this project with Ryan.

I've just been working on three really big projects for the past three years, so for me BUMPER was such an immediate gratification and relief. Not overthinking things and having a lot of fun with the project and making something with a little bit more levity than I'm used to. It was a really enjoyable thing and it feels so good to release something, cause I feel like I've been kind of like creatively living in a quarantine for a really long time.

How did the conversation to start this project come about?

Zauner: I think November or December? No, probably earlier than that, October? I've always been a Crying fan and I've wanted to collaborate with Ryan for a while. So I tapped him to help me produce one of the songs on the next Japanese Breakfast record. I went over to Ryan's apartment and we were kind of playing around with it, he came up with some stuff that we ended up using on the record. I think while I was there, Ryan just showed me some tracks he'd been working on, and I quickly came to realize he was sitting on a real treasure trove of material. Once the quarantine started and we had all the time in the world, we're like, "Yeah let's start sending stuff back and forth."

Galloway: The four songs that ended up on this thing were kind of like songs that I don't think either of us would've put on our mainline releases, too? They felt like really good collab songs. And I feel like you could tell like we went for something different.

What are your favorite songs on the EP?

Ryan: I was super excited about the first song. The first song... when I originally wrote it without the vocals, I was like, this sounds so catchy to me, I really like how this turned out, I really like how it's not really guitar-centric, and it has the shuffle beat and I was listening to a lot of that music. When Michelle sent back the vocal take, I'm pretty sure she was like "I just gave you the best hook of all time" or something like, "I just wrote you the most f*cked up good hook." And I got it back and I was just like, This is good. This is very good. That was a very cool moment where, there was so little to do when we started working together for that song. The collab doubled the greatness of that song in my head.

Zauner: Aw, Ryan. Yeah, I kind of feel like Ryan and I think half of the EP as being our initial...like two of the songs, "Red Brick" and "You Can Get It" I think feel more like Ryan's songs. "Black Light," "Ballad 0" feel more like my songs, just because that's how they were started. I think for me, "Black Light" was such a fun thing. It's still very new for me to do beats and make songs like that and it felt very out of my comfort zone to write something like that.

I wrote it about my neighbor across the street, [who] just makes house beat loops like all day, with flashing strobe and colors like from his apartment. He's right across the way and I just like, really envied how committed and in love with music he was during quarantine. For me it was a bit more of a struggle to start writing again or being creative during such a dark and intense time. So I think ["Black Light"] was for me, like the real initial exist of this project. Like, "Well, this is still something that I loved to do, that's always been there for me," so I felt like that song sticks for that reason.

What music have you guys been listening to during this time?

Galloway: This year is the year that I got into K-Pop.

Galloway: Which is very weird. Do either of you listened to the Loona EP earlier this year?

Zauner: I haven't, I need to listen to that. I only know BLACKPINK and BTS.

Galloway: The song "So What," it changed... I didn't really like K-Pop until this year because I always came from like J-Pop world. But then when I started [listening to K-Pop] I always liked Loona and GFriend, I guess. And like, when I heard "So What" I was like, Oh my god, I get it. I'm hearing the stuff that makes this genre amazing. So now I have this playlist that's like, my K-Pop playlist.

What about you Michelle?

Michelle: I have been really into the new Jessie Ware album. And I feel like that was a big note for me to Alex Tumay, the mixer of the EP, I just, I don't know. I haven't listened to much music in quarantine. I think I've just been so... It's been hard for me to just like, interact with media I guess. And maybe part of it is just being really sad that I feel like my job was robbed from me in some way.

So the albums that have really resonated with me are like, this so unapologetically fantastic disco album that Jessie Ware put out. Track on track just like a banger. I feel like I've just listened to that album, and the horrible music that's on the Chloe Ting workouts [Laughs.] I feel like that's all I've been listening to in quarantine is just this horrible "Blackbird" remix, this techno "Blackbird" remix of the Beatles song. It's like: "Blackbird singing in the dead of night/ met this girl at the club, she was so damn fine." [Laughs.]

Galloway: Wow that's way worse than what you had described.

Zauner: Uh yeah, it's so, so bad. I feel like that's really just the two things that I've been listening to. I've also really liked the new Lomelda album that's coming out tomorrow. There's this one track called "Hannah Sun," and I've just been listening to that song over and over again. I relate.

Do you guys think you'll be making more music as BUMPER in the future?

Galloway: We're waiting for the next quarantine. [Laughs.] Yeah, we're going to make one EP every global event.

Galloway: No, that's not true.

Galloway: I was planning a joke where it [pop songs 2020] comes out tomorrow, and then the next day after it comes out, I was going to send Michelle like 30 songs, and be like, "OK. You ready?" [Laughs.]

Michelle: I bet he does have them. And I bet they're all really good.