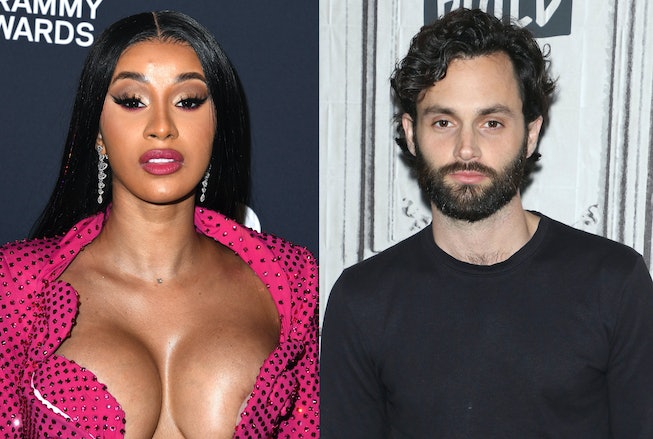 Is there anything better than an unlikely friendship between two very famous people? I don’t think so. First there was Snoop Dogg and Martha Stewart, then Lizzo and Harry Styles, and now Penn Badgley and Cardi B are next.

Over the weekend the “Wild Side” rapper had a “stars, they’re just like us” moment when she revealed herself as one of the 40 million people watching Netflix’s hit series YOU. After a Cardi B stan account posted a video from an old You press conference — where Badgley spoke of his admiration for her social media presence — the Bronx-born rapper fan-girled over the dreamy-actor on Twitter. Which, for the record, we would totally do too.

"OOOOMMFFFGGGGGG HE KNOWS ME !!!OMMMGGGG!!!!!!Yoooo like I’m famous famous," she wrote.

The video took place during the “In Conversation with YOU” event in Manilla, Philippines. During it Badgley discussed his characters’ toxic attachment to social media as a method of stalking his victims. “I think Joe reveals the unsettling logic that a lot of us are following in the worst way socially,” he said. “But I think in the best way it is a tool and there’s nothing inherently wrong with that tool at all. When I try to do something on social media, it’s pathetic.”

“I really appreciate people who have this totally second nature relationship to it, because that's when you have something meaningful and substantive to post, then I think it really comes through and people appreciate it all the more,” Badgley continued. “Cardi B is a great example of that. She has such an authentic relationship. To me, it’s this incredibly nuanced place to be and despite what many might judge as antics, I feel she has an incredibly authentic relationship to that, and I think that’s why people like her so much.”

It didn’t take long for the actor to see Cardi B’s reaction to the video. He, in utter disbelief, responded with a simple “I—.” With the successful premiere of You season three and announcement of season four underway, perhaps Badgley can focus on this budding friendship.