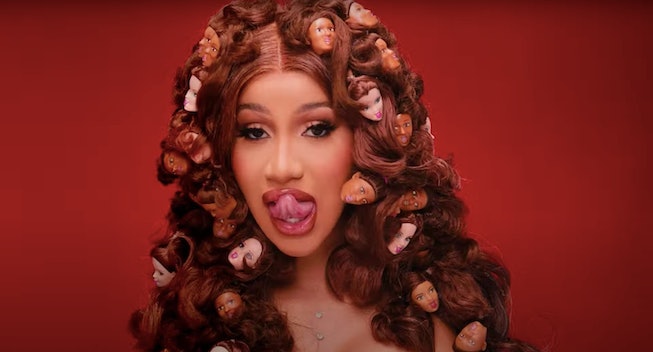 It should be common knowledge by now that Cardi B's music videos are always wild, elaborate affairs. In the visual for her massive summer hit "WAP," she seemed to reach a creative peak as she and Megan Thee Stallion ran loose in a celebrity funhouse complete with a tiger room — and those Willy Wonka-colored latex suits that birthed the video's corresponding TikTok challenge. The Bronx native has now outdone herself with her latest song and video, "Up," which opulently features the "I Like It" rapper in an array of increasingly outrageous outfit and set changes.

Directed by Tanu Miano who's worked with both Katy Perry and Rosalía, "Up" opens on a shot of Cardi with her foot planted on the chest of a cement figure, laying on the tombstone of "2020." She's in funeral wear but Cardi B style, which means her black corset and headpiece are dripping in crystals, with her long, black braid running all the way down her back. She begins her story — "Once upon a time, a bitch said I was ugly..." — and the video turns up ten-fold after that (as do the lyrics). At one point, as Cardi B spits out the call-and-response bar: "Broke boys don't deserve no p*ssy," a legion of black and brown barbie heads that have somehow been stitched into her wig shout back in chorus: "I know that's right!"

The track is a revved-up, no-holds-barred anthem about being a bad bitch in a world of haters, and Cardi B does nothing but deliver some of her best tongue-twisting, alliterative bars. "Big bag bussin' out the Bentley Bentayga/ Man, Balenciaga Bardi back and all these bitches f*cked," she raps in dizzying speed on the track's pre-chorus, before rotating to the song's simple hook. "If it's up then it's stuck," she repeats — confirming yet again that anyone who's got beef with her got beef forever.

In a YouTube live interview with Offset, Cardi B revealed that she wanted to make a song that was "more gangsta, more cocky," and seemed to imply Offset might've helped inspire the song's hook.

"I wanted a more hood song," she said. "I feel like my last song was too sexy. Offset, I feel like this is more like an Atlanta thing, I don't know a Georgia thing. He kept saying 'up and stuck' and I'm like, 'oh shit, I keep saying 'up' and 'stuck' out of nowhere because that's something that I started saying year [...] so I'm like, alright, this is some gangsta shit and that's what I like."

Cardi B's last release, the p*ssy positive anthem "WAP," dominated the charts in 2020 reigning at the top of Billboard's Hot 100 for four consecutive weeks, making it all the more impressive as it was the only song she dropped last year. It's still too early to tell if "Up" will make the same lasting impression, but one thing's for sure: the visual is definitely unforgettable.

NEXT UP
Entertainment
Harry Styles Is Performing At The 2023 Grammys
Culture
Spice Girls May Reunite For King Charles’ Coronation
Culture
Senators Quoted Taylor Swift During Ticketmaster’s Hearing
Culture
The Madonna Biopic Is Being Scrapped
Style + Culture, delivered straight to your inbox.