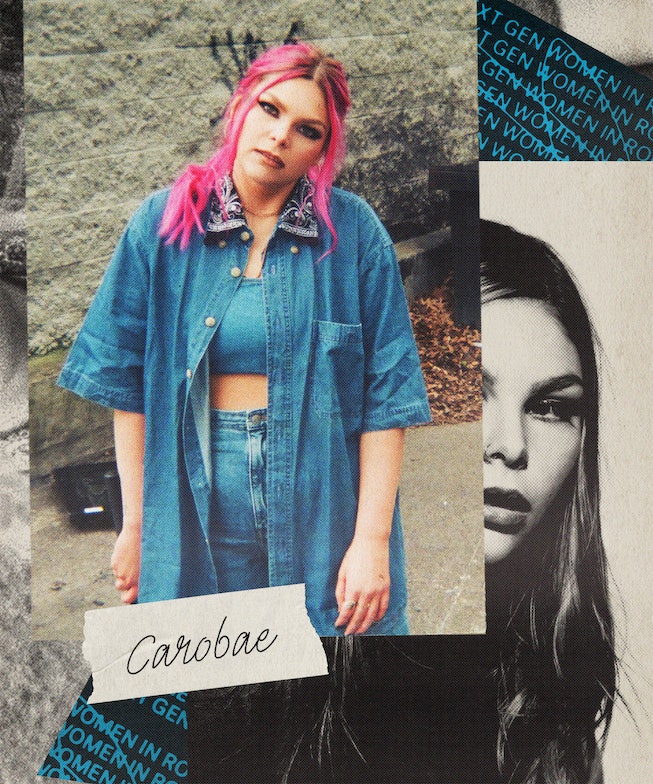 Next Gen: Women in Rock

After graduating from Belmont University in 2018, Caroline Baker (aka carobae) found herself in an unending cycle of writing sessions, studio trips, and meetings with publishers and labels that gained little traction. Feeling rudderless, Baker decided to put out a collection of records herself, titled songs from 3am, which brought her wry lyricism, subtle production touch, and emotive vocals to the public.

“I had a moment in 2019 where I was like, ‘F*** it, I’m just gonna release it. What’s holding me back at this point? It’s not like any publishers or labels are knocking down my door to sign me. I might as well just put it out and see what happens,’” she recalls. “That was the best decision I could’ve [made].”

That mixtape was her breakthrough moment, and since then she’s worked on two EPs, The Longest Year, Pt. 1, out now, and Pt. 2, due out on April 22nd. New singles like the aching piano ballad “Ur Ex from College” and the trap-pop “I Don’t Even Care (Pick Me Up)” showcase her songwriting chops and ability to capture how early-20s drama can ofttimes feel life-or-death.

Here, the artist talks about writing for her pop punk project TRAMP STAMPS, the stress of watching your friends move to Los Angeles, and why more women should learn the ins and outs of production.

Where did your initial passion for music and songwriting come from?

I’ve played music forever. I started playing violin when I was five and grew up playing different instruments by ear and singing. I didn’t really start enjoying songwriting until I got to college, and then I started producing my junior year because I didn’t want to pay people $400 for a demo. I was just like, “I’m gonna download Logic for $200 instead and try to figure it out.”

I had so many friends doing that and I was like, “I would rather have this go towards my rent.” I feel like I would not at all be in the spot I am if I hadn’t started producing my own stuff.

The fewer people you have to translate your ideas through, the better, I’d imagine.

In high school, I was playing in a worship band. Not that I really wanted to, but it was the only place where I could express myself. I was in orchestra growing up. I would compose things for my friends. I feel like I always had a producer's brain and the background for it. Once I learned how to produce instead, it was like, “I can put everything in my head onto the computer.” It’s also so much easier than I thought it would be. I was like, “I’m gonna have to build a studio and do all of this stuff,” but I can go to the airport and sit and produce something on a laptop.

It was cool that you then did that video series breaking down individual production elements of your songs. More people should understand that you can learn to do this on your own.

[I wished] I had seen another girl do it when I was in high school. I was always curious about it, I just didn’t really know where to start, because I didn’t see any other girls do it. It didn’t feel relatable to me, so I just kinda want to make that a little more relatable to other people.

When did you hit on the sound that you’re using for carobae? Was there an aha moment?

I feel like there was a moment, but I might’ve missed the moment. There was definitely a click. [laughs] I had been writing all the time, fresh out of college, and was doing as many sessions as I could. I just kinda got burnt out. I was meeting with a bunch of publishers and none of it was really sticking. I was doing this workbook that they gave us during college, but I’d never bothered to do it [at the time] because I was like, “This is so stupid.” The book is called The Artist’s Way... it’s basically just spending a lot of time with yourself and reflecting and journaling. I was doing a lot of that, and, after my sessions, I would be messing around and would start writing things on my own. After a couple songs, they all sounded so different from what I was writing [prior].

When you’re writing and working on either TRAMP STAMPS or carobae records, does it ever happen that you set out with one project in mind and it ends up flipping to the other?

A lot of my stuff, I’ll either write with friends who are really close to me, or they’ll come from a random session with somebody. If it feels like something that I relate to a lot then it’s like, “Oh s***, we just wrote a carobae song and I didn’t even know.” Some of the TRAMP STAMPS stuff is a little more written-for-TRAMP-STAMPS because of the subject, but there are definitely songs from that where if they don’t make it onto our project, they could get pitched around.

Some of the new singles like “Ur Ex from College” are very revealing, heart-on-the-sleeve stuff. Was it always easy for you to write candidly?

It wasn’t a thing where I woke up one day and was just okay with being vulnerable. The more honest that I’ve been writing over the years, I’ve just been gradually being more blunt and saying exactly how I feel. I noticed a pattern that being more relatable [led to] just a better song in general.

On the track, “When All My Friends Move Away,” you talk about the insecurity that comes from friends leaving town, which is a really common problem for young adults.

I wrote that with one of my really good friends, Megan Redman. I’d started the idea because I was going to my friend’s going away party, they were moving to L.A. It was a time when everybody was moving; the first cycle of people from Nashville that go and do the big move to L.A. It’s always the same, and every time I’m like, “Do I need to go or am I fine here?” It’s a lot of internal thinking and that snowballs into, “Am I even on the right path here?”

Is there any influence on your music that you think would surprise fans?

Off the bat, maybe one of the more obvious ones is Jon Bellion. I just love his songwriting. He was all over the last [Justin] Bieber album. I love how versatile he is and yet I can tell when I’m listening to one of his songs. I would love people to say that about me.

What Carobae song would you recommend to a new listener?

The three tracks I would send you are, first, “i don’t miss u” from songs from 3am. That was the first thing that really got me going. Then, I’d probably say “When All My Friends Move Away,” which is a similar tempo to “i don’t miss u” but not as ballad-y. It shows a bit more of my songwriter side and me trying to be smarter with lyrics. And then, I’d probably say “I Don’t Even Care (Pick Me Up)” off of Pt. 2.

What’s been the most surreal moment of your music career thus far?

When “i don’t miss u,” which was my third single that I ever put out, got on New Music Friday. For my other releases, I would look at playlists and go to New Music Friday and say, “It’s just not gonna be there.” I hadn’t reached out to anybody personally at Spotify, I just used the playlist submission tool. I think that’s the coolest thing, not even just for my sake. I’ve always tried to tell people, “At the end of the day, if you have a good song, it will get heard.” The fact that that was able to happen to me means other people can see that and be like, “Holy s***, maybe I can do that.”