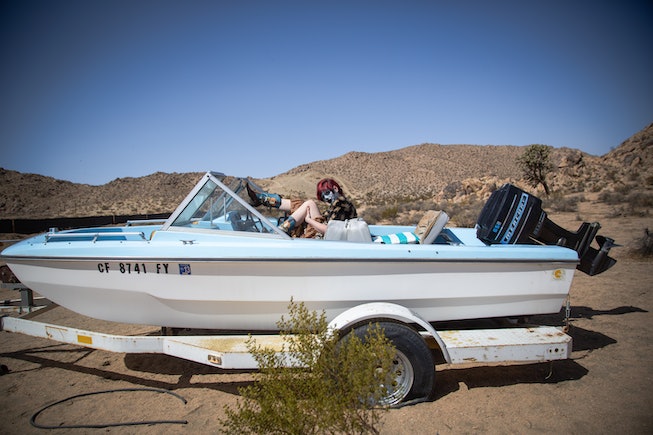 Like many artists, singer-songwriter carolesdaughter had to go on a journey of personal self-discovery to become the confident creator that she is today. At 18-years-old, the artist, born Thea Taylor, already has a dedicated fanbase off the strength of her blunt, moody single, “Violent.” The track, which has amassed over 230 million streams since it was released Thanksgiving weekend of 2020, is an eerily peaceful pop track with lyrics to match.

“I've heard a lot of people on TikTok call me the female Peep, because ‘Violent’ is a really Peep-esque song,” Taylor tells NYLON. “I listened to a ton of Peep, and obviously that's a huge inspiration for my writing. But also the same people that he was inspired by — the kind of OG emo or punk rock music, and that type of writing, is one of the biggest inspirations for me.”

Growing up in Temecula, CA as one of ten children in a Mormon family, Taylor has always walked her own line, and ultimately found her identity in making music. A stint in rehab proved to be particularly fruitful creatively. “I had no phone, and I had no drugs, and my mind needed some sort of stimulation,” she says. “And I wasn't going to do school, so I pretty much just took all that time and wrote like crazy.”

The result is a forthcoming EP comprised of a collection of those songs, many written during Taylor’s darker times. “These are songs I wrote when I was 16 and I was still in rehab, so it’s just seeing where I’m at now,” she says. “The songs to me are really timeless because they mean so much to me.”

One of those songs is “Trailer Trash,” which drops on Friday. Watch the video and read on for NYLON’s chat with Taylor about her background, unique style and what’s next for her:

How has your background influenced your music?

I'm the youngest of 10 kids. My artist's name is carolesdaughter because I love my mom and I think our relationship is a really good example of what... I don't know how to explain it. Our relationship used to be not so good, just because they didn't want me to look the way I look, they didn't want me to act the way I acted. But as time went on, I just think it's a really cool example of: your parents can still be super supportive and super proud of you, and you can still be yourself. So, ultimately, that's really important to me and something I never thought would happen.

My parents are Mormon, and have been together for over 40 years. I went to church every Sunday growing up. Live music was always my thing. My family's pretty musically inclined. Especially at church, the first hour of church you sing a lot, like the hymns and stuff. And I actually learned how to do harmonies because the girls always sing the thirds. Most Mormon kids know how to play piano, and it's just really encouraged that you kind of delve into those talents. But it kind of went a little farther with me, just because I had stuff I wanted to say, and I had stuff that I wanted to write.

When did you begin writing music?

Even as a little kid, I would just come up with these little phrases and I'd be like, "Oh my God, that's so fire." And they'd be stuck in my head for, even like years. So I always knew I was going to do that, but I really didn't start writing prolifically, or a lot, up until I went to rehab. I had no phone, and I had no drugs, and my mind needed some sort of stimulation. And I wasn't going to do school, so I pretty much just took all that time and just wrote like crazy. And that's when I really realized, "Yeah, I'm going to do this."

That's really cool that you found that outlet for yourself. Do you have any major influences that you really credit?

I've heard a lot of people on TikTok call me the female Peep, because “Violent” is a really Peep-esque song. I listened to a ton of Peep, and obviously that's a huge inspiration for my writing. But also the same people that he was inspired by. The kind of OG emo or punk rock music, and that type of writing, is I think one of the biggest inspirations for me, because of the fact that you can just say exactly what you're feeling and you don't have to be so... like indie music sometimes can be so weird. You don't know exactly what they're saying. It's so vague, there's all these metaphors. I think those writing tools are really interesting in songs, but I like my style of writing because it's just really real.

What was the process for creating “Violent”?

When I first heard the beat, I immediately knew I was going to make a song on it because it was just super catchy and just really nice. And honestly, writing “Violent” was super easy. The first thing I came up with was that, “don't make me get violent.” And I was like, "That's so good." From there, I kind of just kind of wrote it out and I recorded the choruses and I was like, "Okay, that's awesome." And I went back and then I did the verses. And I finally recorded and wrote the whole thing in like 30 minutes, but it came to me really fast just because... I don't know, sometimes things just come to me. If you just have one word, you kind of just run with it and then you have a full song and you're like, "Okay, sick."

What's it been to see such a big reception for the song and to see so many people connecting to it?

I think people can really relate to it just because it's like a feeling everybody has experienced. Even though maybe the specifics of it aren't the same, it's just a really common feeling of being hurt or wanting to hurt someone back. Not doing that, but just really wanting to, and the feeling like something’s unfair. And I think also, the timing has to be right too. Having it come out during COVID during the holidays, that is the biggest season for break ups. And so I think it was kind of like a perfect storm in a lot of ways.

How did you develop your personal style?

I think I've always been attracted to more of the extreme styles. And I'm sure that's part of me being raised Mormon, and certain expectations that make me want to go the complete opposite. I do think that I would have turned out this way, no matter what. But my style has always been a little weird. I wasn't allowed to really wear the stuff I wanted to wear as a kid, but I found my ways to still get in some sort of weirdness. I would wear... in seventh grade, I had this little phase where I only wore ugly grandma sweaters. I feel it's the thing. And I would specifically pick out the ugliest thing I could find and just pretend it was cute. So everybody else would be like, "Does she really like that?"

Just because we didn't grow up wealthy or anything. And in school, I was kind of bullied because I don't have cool clothes and my shoes were beat up and I wore the same ones every day. And so to kind of make up for that, I feel I've just had to be, just own it in a way. And be even more weird, like, "Oh, I'm doing this on purpose. I swear." And that kind of just developed until I was really not caring what anybody thought about me or what I looked like, and just kind of doing whatever I wanted.

Do you feel like your family has embraced your musical and artistic side?

Yeah. I mean it's pretty different. I'm a very different person than a lot of my family, but they can still recognize that I'm really talented and they love that I'm passionate about this. And I think my parents are super proud and super happy that I get to do what I want to do. Because I honestly think that if this didn't work out, I would just be unhappy my whole life. This is the only thing that is important to me, is my music. And that really got me sober. It really changed my life, deciding that this was going to be my thing. And so I think like no matter, even if they think my music's weird, or if they thought that like, "Oh, why do you curse so much?" or this, or this, or that, at the end of the day they're just happy because it's what I love to do.

Do you still feel connected to your Mormon community?

It's a big part of who I am because I was raised that way. And I can't just pretend that never happened or that wasn't my childhood, because it was. But I don't think any person would see me walking down the street and be like, "Oh, that girl's Mormon." I think about it in a lot of ways. I know it has affected me a lot in how I am as a person, and how I do things. And in songs, I do kind of mention... I do have some religious, what's it called just when you throw in something religious? I don't know. But in one of my songs, like in “Cold Bathroom Floor” I talk about, “and God isn't real but I've been known to pray.” And in “Porcelain Jesus,” there's some religious connotations in there, and stuff like that, which is kind of my way of not rebelling, but just giving people a better picture of me.

I'm working on an EP right now that I hope to be out before summer. Honestly, as soon as it's done, I want it out. But I just want it to be the best thing ever, so it's going to take a lot of work. But I'm working on that, and I have pretty much a million songs and I've been waiting a long time to record a lot of them.

Being able to go through them and pick some for the EP is really special, because these are songs I wrote when I was 16 and I was still in rehab, so it’s just seeing where I’m at now. The songs to me are really timeless because they mean so much to me.

And “Trailer Trash” is one of those songs?

Yes, I wrote “Trailer Trash” two years ago when I was in rehab. The song is about accepting the unique and sometimes trashy parts of you. The video was inspired by Bombay Beach and the art there. I wanted to create my own world where I could do anything I wanted.