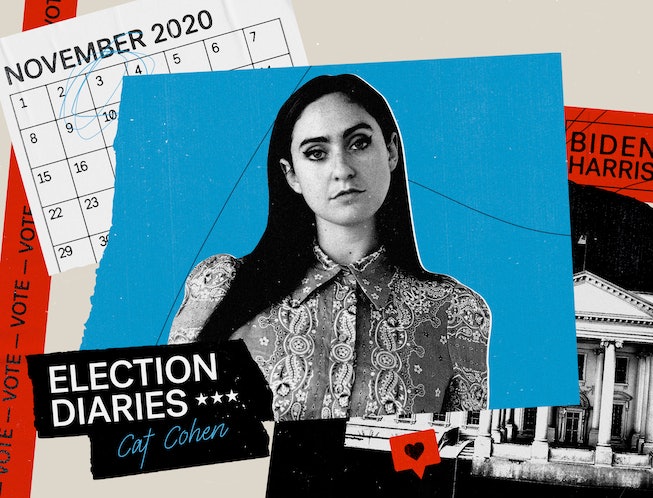 Welcome to NYLON's Election Diaries, a new series of political op-eds. Leading up to the 2020 presidential election, we're asking some of our favorite voices in music, fashion, and pop culture to write down their thoughts leading up to this monumental day, including their hopes, fears, and everything in between. Up next, actress and comedian Cat Cohen on reaching out to people outside your social media bubble.

A pandemic? Well honey, it’s certainly not what I had in mind! After endless days in quarantine, I’ve been diagnosed with Instagram Brain, which means I can’t look at anything for more than one minute, and sometimes even that’s too long — have you ever done a plank? Not for me. I’ve struggled over the past few months to separate reality from my news feed, and as the election nears, it’s hard not to feel hopeless.

I tried to cure myself this summer by taking a hearty, organic, grass-fed road trip across the country with my hot/kind boyfriend. We didn’t see a single Biden-Harris sign. From NYC down to Texas up to Utah through Idaho, Montana, Wyoming, all the way back to NYC — nothing. OK, I think we saw one or two as we drove past the Northwestern campus while I cried because I missed “the idea of being young,” but other than that, it was just Trump signs littering the highways of our gorgeous nation; Have you been to Idaho? It’s randomly stunning — an exquisite place to do the drug mushrooms and shit near the shadow of a tree. It’s not that I was surprised by this information (assuming the innate goodness of people is so 2016), but even so I felt disillusioned. I had once been so hopeful! So open-hearted! So able to drink five spicy cucumber margaritas and not feel like shit for two full days!

The next day I walked to the polls. I waited. I saw an actress from a hit HBO show in line and decided if I got to be on an HBO show I would never feel pain again. Randomly, I was wrong. I cast my vote. I went to an open-bar comedy show/election viewing party. You have to laugh. We didn’t. I blacked out from the popular drug alcohol and fell asleep crying to the news.

The next morning, I woke hungover and went to midtown to record a voiceover for a Plan B commercial. Babe, if this were a feature film, it’d be too on the nose. The woman running the session and I cried. I cried about my naiveté, my shame, my body, my broken-ass ovaries that are covered in tiny cysts (shoutout to my fellow PCOS gals!!). I cried about so many things and then got a bagel. I assumed we’d right this wrong the next time around, but over the past four years, things have gotten so muddled, so chaotic, so truly psycho.

I know I’m voting for Joe Biden because Black Lives Matter; because abortion should be legal, no questions asked; because we need to protect the LGBTQIA+ community, particularly Black trans women, at all costs; because we need to raise the minimum wage and save the environment; and because I’m excited to vote Trump so, so far the f*ck out of office. I’m EXCITED to vote for Joe Biden and I know my li'l online world feels the same way. I’ll post a hot pic of myself with a Biden-related caption and people will like the post, which makes me feel very good (j’adore external validation), and then I’ll move on with my day, which usually involves moving from bed to couch until the sweet relief of sleep comes on like a long exhale after a yoga class someone else made you go to.

But what about the people who (gasp!) don’t follow me online? What about the people who put the Trump sign next to that crystal clear river in Idaho? And what can I do that I failed to do in 2016? I think the answer lies in taking things… drumroll, please…offline. (Cut to me free-soloing up the Chrysler Building to get my agent’s attention. I’m joking; I get their attention by calling the office 12 times a day to scream “why did the pandemic happen to meeee?” until my Seamless order of “iced coffee” arrives.)

I know there’s work to do offline, and I’m not talking about my lifelong dream to learn how to hang up a shelf (how does it stay???). I’m talking about the conversations I, a privileged white woman from Texas, can have and can continue to have with people in the community I grew up in. Because even though I’m a needy slut who just said “my pussy hurts” on a Zoom call, growing up, I was deeeeeply involved in an evangelical community that fully broke my brain (you’re like… save it for another essay, bitch!) The point is, even though it can be awkward turtle vibes, I can reach out to people who exist outside of my social media bubble.

I can respond to my grandmother’s chain emails that are written from the perspective of an aborted baby (I’m serious) and tell her why Planned Parenthood is so important to me, why I believe in a woman’s right to choose to do whatever the fuck she wants with her body. I can text my blonde friends with blonde babies and explain why they need to consistently donate a portion of their income to organizations that support the BLM movement. I can dust off the WhatsApp thread I have with the girls I was in a sorority with for six weeks and ask what everyone’s voting plan is. We, and specifically my fellow white women (53% of us voted for Trump last time, ladies!!!), need to reach out to the people in our lives that we disagree with. A lot of lives depend on it.

My friend, the brilliant poet Katherine Noble, wrote an open letter to Christians about the election that can be found here. If you have any conservative and/or religious people in your life who aren’t on the Biden train, sending them this might be a good way to start a dialog. Just a thought. Honestly, I don’t know what I’m doing. I’m scared and sad and have diarrhea almost every day of my American life. I’m just a chubby white girl with a camel toe who likes to go on stage in expensive clothes and talk about having sex with guys in their 40s who skateboard, but I’m excited to do what I can, which is vote. It’s not everything, but it’s something. And right now, it’s definitely the sexiest thing you can do. See you online ☺

NEXT UP
Life
Away’s Second Designer Collection Will Have You Traveling In Style
Life
Rachael Finley Never Got A Guide To Life, So She Wrote Her Own
Entertainment
'Outer Banks' Star Madelyn Cline Takes NYLON To JBL Fest
Entertainment
Soccer Mommy, Wet Leg, & 48 More Artists Made An Album For Abortion Rights