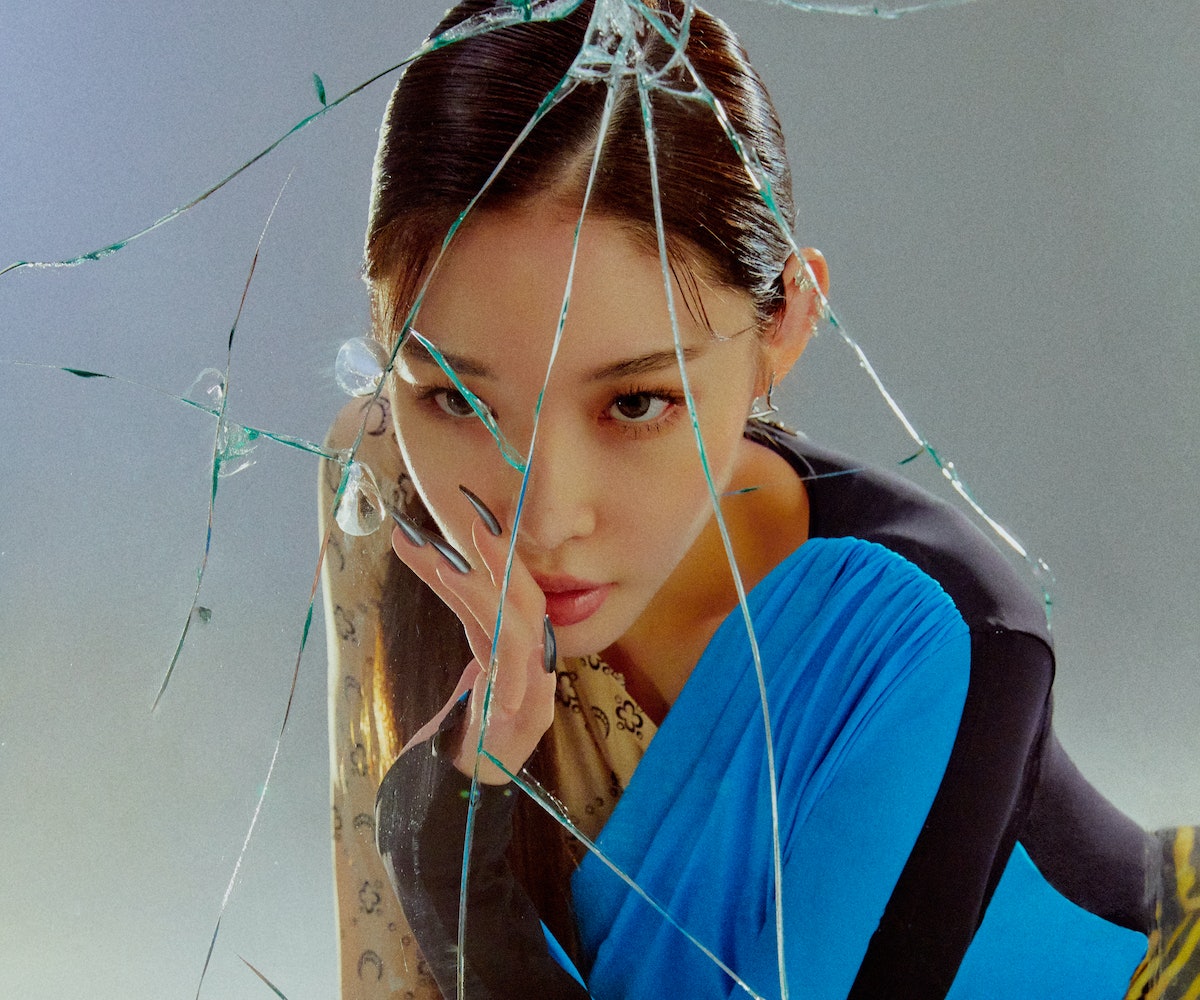 Courtesy of the artist.

To understand Chung Ha, one needs to watch the way she moves. There's nothing subtle in how the 25-year-old performer can command a stage with a confident strut and a fiery gaze; her presence is intoxicating. The K-pop star has learned how to wield the intensity of the spotlight like a superpower, first as the main dancer of the mega-successful project girl group I.O.I and now as a versatile solo artist in her own right. On her first full-length album, Querencia, a veritable cornucopia of moods and musical influences, Chung Ha dares you to "sit back and watch [her] ride."

Across 21 bold tracks, Chung Ha traverses a multitude of soundscapes like a pop chameleon, from the deep house groove of "Stay Tonight" and the crunchy pop of "Flying on Faith" to the sultry R&B of "All Night Long" and the sweet acoustics of "Byulharang," a healing song written for her fans. The album is a testament to her metamorphosis from a captivating performer into a true global superstar.

Nowhere is that more apparent than on "Demente," a polyglot collaboration with Puerto Rican rapper Guaynaa in which Chung Ha sings in both Spanish and Korean. It's K-pop meets reggaeton, a vibrant fusion of cultures. Meanwhile, the bass-heavy "Dream of You" is sung entirely in English. This versatility across languages and genres reflects Chung Ha's own multicultural upbringing. Born in South Korea, she spent her formative years splitting time between Seoul and Dallas, Texas.

Querencia represents the dynamic spectrum of her artistic identity. The concept itself is derived from the Spanish language, meaning "a place where one finds peace of mind." Chung Ha introduces this on the album as a place "where my desires are protected, my own oasis." Here, she explains via email, she is free to be herself — and she invites you to bask in that feeling, too.

Querencia consists of four "sides" or themes: Noble, Savage, Unknown, and Pleasures. Are these the different sides of you as an artist? What do they represent to you?

The producers came up with the idea of the four components. I can’t say that I have all four sides of the album in me, but I can certainly say that they show various aspects of me. I wanted to show in my own color that I’m a person who takes on challenges and musical concepts without being limited to one concept.

This is your first full-length album, and you’ve been rolling out singles since early last year. What did you want to prove with this album?

My intention wasn’t to prove anything. I kind of let go of my way of thinking that I always need to be perfect. As I couldn’t be on stage as much since the pandemic… I thought about how I could show everyone’s effort put in while working on this album. The release date of the album was postponed multiple times unintentionally, which in some sense offered me the time to craft it a little bit more. I wanted to show all the steps that were taken to create this album to everyone. I wished that everyone could really relate to this album and walk toward the finish line altogether. I think that’s the reason we released so many single albums along the way. We put so much time and effort into it. Every step of the way working on this album was a big challenge.

I really love your pre-release single "X" because it’s this simmering, atmospheric sound that we haven’t heard from you. How did this collaboration with The Black Skirts come to be, and why did you want to release "X" ahead of the album?

At first, track “X” was very new to me as well. As I was working on my album, I wanted to try out many different genres and types of music. And “X” was one of them for sure. I learned a lot as I was in the studio recording. I wanted to share the new discoveries I felt with [my fans,] Byulharang. I think it tells a story in a way that everyone can easily relate to. There were also many pre-launches, and those tracks were labeled as pre-launch tracks one, two, and three. But there were many other tracks that were released as well. The reason “X” was released third is that all my other songs were dance music, and the title track of the album is also dance music. In this context, I wanted to introduce a slightly different type of music before releasing “Bicycle.”

Also, my friends really liked the song. So I kind of assumed that other people might find it refreshing to experience a new type of music performed by me.

“My intention wasn’t to prove anything. I kind of let go of my way of thinking that I always need to be perfect.”

"Demente" is a collaboration with Puerto Rican rapper Guaynaa. This is the first time you're singing in Spanish, which makes this such a cool blend of cultures and languages. Why was it important to you to feature a Spanish-language collab on this album?

I personally enjoy Latin music very much, and I always wanted to try that genre. I’m really glad that this collaboration happened, and I’m really excited about it! It was my first time recording in Spanish, and it was something completely new to me. It wasn’t easy, but I felt a sense of achievement afterward. I think this track is a really good fit for Querencia because so many artists worked on it together. I’m also grateful for having the chance to reach out a little bit more to Spanish speakers.

You’ve explained that Querencia is a Spanish-language concept that means "a place from which one's strength is drawn, where one feels at home." Where and when do you feel like your most authentic self?

I first got to know the word Querencia not by its dictionary definition but by heart. So to me, Querencia is really about what makes me myself. It could be time, an object, space, or a particular emotion that’s shapeless. It’s really hard to define what querencia is. In 2020, working on this album itself gave me the strength to move forward and gave me a sense of stability. So I named it Querencia.

You’re such a mesmerizing performer, but how does performing make you feel?

To be honest, I only have short moments on stage, so I can’t really pick out the exact words as an answer to this question. But one way of describing it is that I try to do my best to show everything I got because the time on stage is the chance to show what I am and what else I can be. That’s why it’s so thrilling and exciting every time. Once I’m on the stage, I don’t really think of anything else much.

Since your debut in 2017, you’ve showcased your versatility as an artist. In many ways, Querencia seems like a reintroduction to Chung Ha. Do you feel more confident as a soloist now?

Just as you said, I think this album is about taking another step forward for me. On second thought, it’s like my second debut. Thinking about what this album means to me makes me feel as nervous as when I was making my first debut. I can’t say I’m 100% confident, but I’ll do my best to perform “Bicycle” and demonstrate the messages of this song.

["Bicycle"] is about sending a clear and direct message of going beyond the conventional way of thinking and moving forward. Quite often there are times when it is not easy to say out loud “it has to be done this way!” as you put pressure on yourself because of existing stereotypes. The song “Bicycle” is about “Don’t think. Just do.”

In what ways would you say you’ve changed the most since your debut in 2017?

I actually want to ask this question to my fans! Honestly, nothing much has changed since my debut. My surrounding environment, my friends, and even my daily routine are still pretty much the same. However, it is true new things are happening. Maybe more things will change for me this year. 2021 itself is a cycle of changes.

What is something, other than your fans and your music, that makes you happy?

Family! Friends! Small moments that we sometimes take for granted. My dog, Bambi. The closest people around me, my staff members and dancers. Everything around me! They are so precious to me, and they are ones who make me happy.

This is something I like to ask everyone: How do you define success?

I think success is when you know there is something new to learn, and when you improve yourself through learning. Also, I think it’s about making lasting relationships.