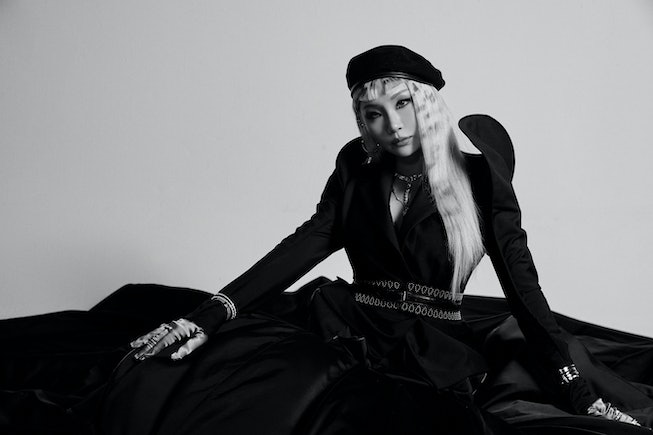 Courtesy of the artist/Very Cherry

In June 2021, CL appeared in a place many of her fans didn’t expect: on the small screen, in a surprise cameo appearance on rapper Lil Dicky’s cult FXX series, Dave. In the show’s Season 2 premiere, CL plays herself as Dave travels to South Korea to record and film a new song with her in hopes of landing a chart hit through the K-pop machine. A winding, half-an-hour of plot later — involving a weed scandal and the country’s mandatory military service requirement for men — CL dumps Dave and his attempts to ride on the coattails of the industry. “I don’t want any of you guys wasting my time,” she tells him in the episode’s last moments, harnessing the bad-b*tch attitude she’s known for. “I love K-pop. I don’t want to be a part of you disrespecting it.”

It was a rare public appearance from the legendary K-pop star and former leader to the trailblazing girl group 2NE1, who for the last few years has been laying low as she prepped the release of her long-awaited debut album (which has been highly anticipated since as early as 2014). In October 2020, there was some movement indicating that the moment was almost here as she released the album’s first two singles, the energetic “+HWA+,” and the melodic “+5 Star+.” But now, nearly a year later, she’s actually doing it. Titled Alpha, the 11-track album is finally landing Oct. 20 via Very Cherry, her very own company. Welcome CL, the independent artist.

“This is me getting out of [my] comfort zone to the fullest. This is me releasing an album as an independent artist. This is definitely a statement coming from a K-pop system and also [from] being an idol. K-idol, they call it,” CL says over Zoom one recent evening. She’s calling from Los Angeles after a flurry of traveling over the last few weeks: from Seoul, South Korea, to L.A., to New York for the Met Gala, to Las Vegas, and back to L.A., where she is now shooting a music video. All of the activity has her feeling a bit under the weather, so she opts out of turning on her video.

“I wanted to make sure I know exactly how everything works and understand what I’m doing instead of just going back to the system,” she continues. “And hopefully, this empowers my other artists in Korea and other artists that come from an idol group to be like, yes, you can continue doing this independently whether you decide to go to another label, however way it is. But I just wanted to make sure I am completely understanding everything and learning everything.”

The long and bumpy road to CL’s Alpha has not been easy. Although 2NE1 didn’t officially disband until 2017, CL has been eyeing her solo breakout since 2014, when she brought Scooter Braun onto her team as co-manager with her former Korean record label (CL asked we not refer to the record label by name in the article, as she doesn’t want to give them any more “press”) for her U.S. solo debut. She released her second solo single, “Hello B*tches,” in 2015, and followed that up in 2016 with her debut American single, “Lifted,” a chill and groovy weed-gesturing track that sampled Wu-Tang Clan’s “Method Man.”

Then it seemed like things stalled. She didn’t release anything in 2017, and on New Year’s Day of 2018, CL posted a now-deleted clip of an unreleased music video along with a note on Instagram, seemingly implying that there was trouble going on behind the scenes regarding her album. “This video is something I shot over a year ago and it may or may not ever come out but I always loved it and was sad it never got a chance to make it to you guys,” she wrote to her fans. “Showing this little bit that I am able to may get me in trouble but it’s worth the risk to give you something and keep my promise.”

Ten months later, in October 2018, CL left Braun’s SB Projects roster (though she re-signed in early 2020 as an independent artist). Then, in November 2019, she left her former Korean record label, a decision that she said was entirely her own. To date, CL, Braun, and her former record label haven’t really dug into the details of what really went down behind the scenes. In a 2021 Billboard cover story, CL seemed to imply it all was just unfortunate circumstances, and perhaps the bad luck of being one of the first Korean artists to attempt the breakthrough. “I don’t think anyone was trying to hold me back,” she told Billboard. “I think it was the opposite. Everyone was excited. But no one knew what to do. ... There’s not one person. It’s not one thing. It’s nobody’s ‘fault,’ it’s just whatever happens, happens. And I learned the best way is to just really learn from it.”

If you ask CL about all this now, she’ll say she prefers to look ahead at the future. “I think it’s more about focusing on what’s next and what can I do from this?” she says. “Like all those challenges. There were many challenges in my life that I had to overcome. So, I’m excited about what’s next, and I really hope my fans are too.”

“This is definitely a statement coming from a K-pop system and also [from] being an idol.”

With a title like Alpha, CL’s debut album could’ve ostensibly been a natural continuation of the confident rapper, singer, and dancer persona behind previous, self-gassing, iconic singles “I Am the Best,” “Hello B*tches,” and “The Baddest Female.” There are, of course, several of those attitude-filled bangers on the project — the recently released single “Spicy,” and “+HWA+” being two of them. But for the most part, the star says the creation of the album largely pushed her out of that comfort zone. “Lover Like Me,” her latest, mostly English single is the softest we’ve seen her yet, as she sings and raps about her merits as a lover over a pop-R&B/EDM-lite beat. “It’s a side I don’t think I ever showed,” CL says of the track. “Even in my 2NE1 days, it’s sonically… it’s very different.” Another song on the album, whose name she keeps to herself, has CL singing all the way through. “Singing, singing,” she repeats, emphasizing the word. “I don’t think I’ve ever done that.”

CL also expanded her circle of collaborators for some of the songs, inviting other Korean rappers who she says share the 2NE1 outsider spirit. “[2NE1] were the ones that were dressed differently. The girls that wore sneakers on stage,” she says. “A little bit different from the standard K-pop idols back then. I wanted to make sure I celebrated that and invited other kids in there.” (On the topic of the possibility of a future 2NE1 reunion, CL says never say never. “We always talk about it. I’m hoping it’s sooner [than 25 years] because I want to be able to sing ‘I’m the Best’ and break a leg. And not literally.”)

For CL, the album is more than just a (very long-awaited) comeback. It’s a statement of who she is now that she’s just CL, laying down the perimeter of how wide her artistry can go. “I wanted Alpha to be the blueprint and the beginning of just CL,” she says.

After years of working inside the K-pop “system,” as she refers to it, CL now sees herself as separate from that industry, even as the boundary between the U.S. and South Korean markets is seemingly getting thinner by the day. “I don’t think [crossing over] exists anymore,” she says. Instead, think of her as just your typical global, independent artist, who just happens to sing in Korean.

“I wanted Alpha to be the blueprint and the beginning of just CL.”

There has always been an element of fearlessness in the mythology and movement of CL as the charismatic, versatile, and boundary-breaking leader of 2NE1, and now, as she steps back into music this time alone. Decades into her career, it’s what drives her now after seemingly having achieved everything an artist could dream of. Still, Alpha is the last box to check on her list.

“Success, I think, it’s how fearless you are,” she says. “If I want to do this, how can I do this without all the process of self-doubt or all of those things? How can I really focus and tune in and get to that? I think that’s being successful through everything we go through in life and all the lessons that are handed to you.”

“I hope Alpha guides people emotionally and helps you to overcome that,” she continues. “Because you spend time with music, and that’s what you remember, Oh, I remember that was the time this helped me go through this era. I want Alpha to be that.”

CL’s Alpha is out October 20 via Very Cherry.