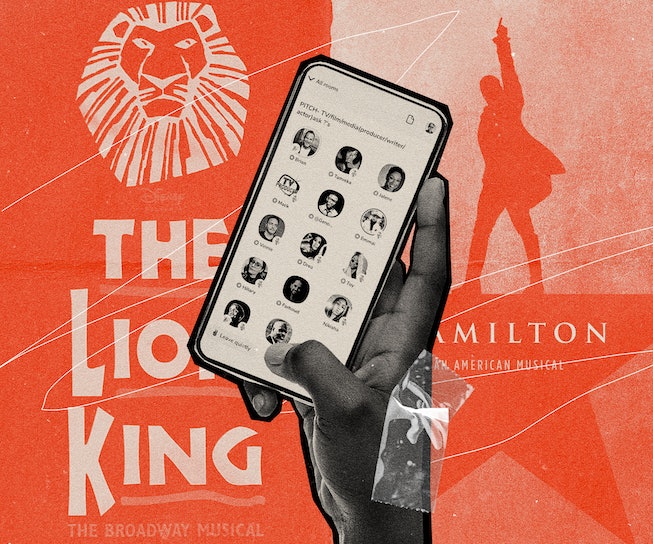 People may still be getting familiar with Clubhouse, an invite-only, audio-only app known for rollicking discussions, celebrity drop-ins, and networking opportunities, but the platform has already been embraced by the entertainment industry.

It's also emerging as a new frontier for theater, especially during continued widespread shutdowns. It’s a phenomenon that all started with a surprise performance; back in December of last year, music marketer Noelle Chesnut Whitmore independently put together a surprise production of The Lion King musical, bringing together a team of actors, musician and artists to run the show live, complete with narration, live singing and individual character roles reprised for audiences. Bringing in an audience in the thousands, the event caused an international ripple effect within the Black theater community.

Leroy Church is a performer who’s been working in theater since his late teens. When he received a call from some industry peers asking him to volunteer time towards a production of Dreamgirls via Clubhouse, he found the offer impossible to refuse. “I ended up becoming the casting and artistic director, but also operating in multiple areas — a little as a producer, a host, some PR,” Church told NYLON. Headhunting for other volunteer performers over the app, Leroy became something of an accidental Simon Cowell figure with his hosting of the Dreamgirls audition rooms. The auditions brought in over 10,000 users listening in to the hopefuls, and Leroy himself ended up as the number two trending topic on US Twitter, helped in part by his polite-but-firm rejection catchphrase: "Thank you, happy new year." Church didn't mind. “To be trending across the country, in the middle of quarantine when you don't have a job, just for doing what you love to do? Yeah, it's thrilling,” he said.

“To be trending across the country, in the middle of quarantine when you don't have a job, just for doing what you love to do? Yeah, it's thrilling."

It’s a fever that’s even made its way across the pond. Dujonna Gift-Simms is a cast member in Hamilton as performed in London’s West End. Coming off the momentum built by the original Lion King performance and Leroy’s own work for Dreamgirls, UK presenter and media personality Oloni reached out to Gift-Simms and other performers from the show, eager to meet the interest arising from its celebrated Disney+ run and to connect with its fans. “Oloni bought a set of tickets and hosted a performing competition, inviting us along to speak with fans and audience members,” Dujonna said. “She got people to come on [the virtual] stage and sing or rap something from Hamilton, and we were there to give feedback and advice as people who are in the show.”

Similarly, performers like Ashawn Dabney-Small, a young creator of only 18, got involved in auditioning and is working on running his own performance of The Color Purple musical on the app, greatly inspired by the work of his fellow creators. “I attended the Lion King performances and was able to get on stage to share my appreciation — I actually started to cry,” he said. “My grandmother passed in recent years, and with the shutdown I’d been quite depressed thinking about her passing more. The musical affirmed for me that theater was something I needed to stay doing.”

So far, calling the rooms popular would be an understatement; they’ve been highly celebrated and have put fans, aspiring theater heads and seasoned performers in line with opportunities they likely never would have experienced otherwise. “We had Amber Riley from Glee help moderate during the auditions; she’d played Effie in the UK West End version,” Leroy says. “We’ve even had input from Tony-nominated Sheryl Lee Ralph,” he says, referring to the actress better known to viewers as original cast member Dee on Moesha. It’s a similar fortune that’s come to Ashawn through his own work, and he shares that he found himself put in touch with original Color Purple novel writer Alice Walker, via a contact on Clubhouse impressed with his work. “A lot of blessings are being poured into my life from this production that I didn't think would ever come out of it,” he said.

Besides the joy it’s brought to audiences and performers, these productions should be noted for their significance in that they’ve been pioneered through the work of the Black theater community. With the Lion King cast, Dreamgirls, the creators heading up The Color Purple and the Hamilton performing competition, the performers share that many of the leading creators and audiences in attendance have consisted of majority Black users looking to get involved in the space. But it’s not lost on many that the inclusivity found on the app is a great contrast to the professional theater space, where Black performers and audiences often struggle for representation due to issues of inaccessibility.

“The Black community are very underrepresented in the entertainment industry in this country,” Dujonna said, commenting on the UK media's notorious diversity issues. “Realistically as performers, we understand that theater is a very expensive hobby. We don’t want price inaccessibility to limit our community being involved in some way, so it’s been a really magical opportunity to use our voices and platform to welcome people into the theater world,” she added. With Oloni’s event giving fans a means of accessing free tickets, to try out performing and receive constructive advice on getting into professional work, it’s been a means of combating the factors that can often allow many to feel excluded.

Such motivations were echoed by Leroy, whose production of Dreamgirls has been used to advertise and support various organizations in the US supporting Black communities. With cast and crew members volunteering their time unpaid, often putting in income to source sound equipment and tools for better performing, the pioneering creators are clearly passionate about opening up doors to those who may not be able to access Broadway otherwise. “Struggling with representation and accessibility in theater is a universal thing,” he said. “There are students, or inner-city youth who might never be able to afford a Broadway ticket. Now their parents can download an app and listen to stars who’ve performed on Broadway for free.”

These developments to break down access barriers are positive innovations coming from the Black theater community, but there’s still concerns in translating this momentum to the larger institution of theater itself. Whilst Ashawn is pushed by similar motivations to use the space to offer networking opportunities, free advice, and support for entry level Black creatives who’ve not yet had a chance to take their talents further, he’s passionate in urging those in positions of power to do more to create spaces where Black actors and fans can start to feel included. “In terms of Black representation, I don't see a lot of it,” he said. “There are a lot of Black performers doing amazing things, but gatekeeping does happen. And those with the keys need to open up! Just from this app, you can see there's so many talented performers who deserve the same access to the industry others have.”

This most recent Clubhouse innovation is a testament to long-term cultivation of the entertainment and musical spaces that Black people have long been making, and evidence of their developments in yet another space of contemporary popular culture. Hopefully the industry makes moves to catch up and reward their important contributions, but in the meantime, Leroy sums up how the community will likely always be one step ahead of the game in driving culture forward, no matter what the limitations are: “As technology advances, we'll find ways to make things happen.”