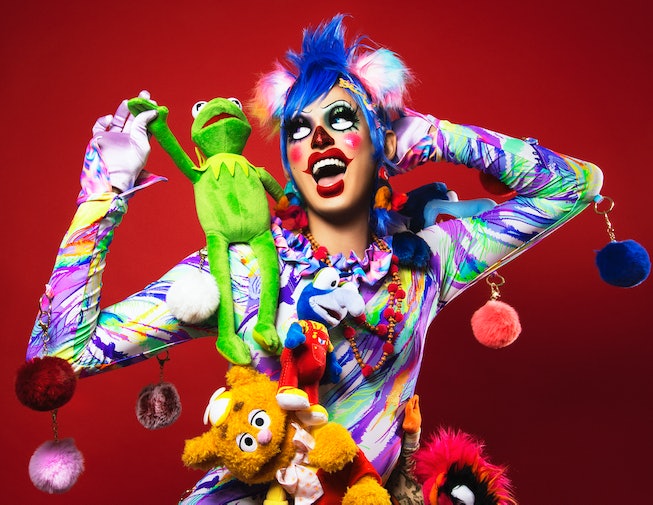 When Crystal Methyd first started doing drag, she did what many new queens do to learn how to paint their face: turn on some YouTube makeup tutorials. Because a lot of the people she was taking guidance from were fair-skinned and light, Crystal was using products like white cream to highlight. But it didn’t do any favors to complement her natural skin tone and her friends often joked that she looked “so white” while in drag. So, Crystal, who is half Mexican and half white, started changing up her makeup to better match her complexion and took those lessons into the drag gauntlet known as RuPaul’s Drag Race. A few episodes into her run on season 12, she was having a viewing party at home with her mom and dad. It was the week that she wore a look inspired by Frida Kahlo, complete with a billowing golden cape and crown of flowers.

“My mom was like, ‘You look like a beautiful Mexican woman,’” Crystal tells NYLON. “I don't know why it meant so much right then, because it just hasn't ever been anything we've ever really talked about. We just are Mexican. I feel like she didn't really kind of teach me anything special about it, but it was just nice to hear that.”

Speaking to NYLON for Latinx Heritage Month, the 29-year-old drag queen from Springfield, Missouri, exemplifies the multiplicity of the Latinx experience in today’s world. According to the United States Census Bureau, the U.S. Hispanic population reached a record 60.6 million in 2019. Meanwhile, television continues to struggle with reflecting the Latinx community. Thankfully with an artist like Crystal on screens earlier this year, she’s proving that there’s no one way to be Latinx.

Real name Cody Harness, Crystal was born in San Jose, California. Her mother is Mexican and most of her mom’s side of the family still lives in California, where she remembers being around a lot more fluent Spanish speakers and could understand the language better when she was younger. At age 5, they moved to Missouri to be closer to Crystal’s dad’s parents. She considers herself a “Missouri girl,” a self-described “big ol’ hillbilly” who loves to go camping and earned the title of Eagle Scout as a teen.

As many multiracial people can identify with, there’s always been a level of presenting as racially ambiguous or passing to other people. She gets “very, very dark” in the summers but acknowledges that during the winter months she’s very white-passing. Growing up, she had a friend who was Chinese, who people thought they were twins. Others have presumed she’s Native American.

Once Drag Race fans started to realize that Crystal is Mexican, many fired off surprised tweets largely affirming their love for the queen. Some took on advocating for her, making sure that people didn’t erase her Mexican background.

“Being half Mexican, half white, it's always something that I've kind of internally struggled with. Why, I'm not really sure. I just felt like I'm not Mexican enough for this, I'm not white enough for this,” she says. “Then to have then strangers talk about it too, it was kind of strange. But I feel like for the most part, it was all positive. Most people just loved it.”

That nagging feeling of not being “enough” is extremely common for multiracial and multi-ethnic people. However, there’s a number of fond memories that Crystal looks back on that made her feel at home with being Latinx. There might not have been many fellow Mexican Americans with her in classes, but in high school there was a day when they shuttled Hispanic students to Missouri State University. It might have been a diversity recruiting program, but those days when she was surrounded by other brown kids she felt like she fit in. She went through Catholic traditions like Confirmation and lit candles for Day of the Dead.

Crystal’s grandmother, who gave her a message of encouragement in Spanish during the finale of RuPaul’s Drag Race, has continually been a link to her Mexican roots. She doesn’t speak any English and Crystal’s Spanish isn’t great, so sometimes there’s a breakdown in communication. But there is one common language: food.

“My grandma makes the best tortillas in the world,” Crystal says. “So every summer when she would come, we would literally make hundreds of them and freeze them and put them in the freezer so that they would last us all year long until she came back the next year.”

Of course, there’s also Crystal’s drag. Her mom and her colorful style have always been the biggest inspirations for her craft; she’d even go into her closet as a little boy and put on her dresses.

“I feel like I've never been super connected to my heritage, but I always like to pull inspiration and bring it into my drag, because it is a part of who I am,” she says. “A lot of the time, people don't realize or they like to discredit that I'm only half Mexican. Or people make fun of me for not being able to speak the language. I always love to just make people feel proud of where they come from.”

Throughout the season of RuPaul’s Drag Race, jaws dropped over Crystal’s unabashed love for the bizarre and ability to merge the weird and whimsical. She didn’t shy away from making Freddie Krueger a fashion statement or turning Sesame Street’s Bert and Ernie into colorful lesbians walking down the mainstage for the drag makeover challenge.

But every now and then there were more explicit nods to her culture, such as the Kahlo look and horsing around at the finale as a huge festive piñata while her competitors went for more classic glamour. Her finale lip sync ensemble was actually a creation by Project Runway alum Mondo Guerra. They’ve become friends as they’ve started to collaborate together and there might even be a Latinx-inspired fashion moment in the future.

“I don't know if he's going to make it for me or not, but I've been wanting to do Chi-Chi's white gown from To Wong Foo,” she confesses. “I've never had a proper gown but I'm like, that's the one for me.’”

As for post Drag Race life, things obviously are a bit different than Crystal had imagined due to the COVID-19 pandemic. Nightlife and in-person performances, which are mainstays for drag queens, were virtually shut down for safety reasons. But in August she made the 8-hour trek from Springfield to Chicago for her first live performance since the end of reality competition at Voss Events’ Drive ‘N Drag. While she’s gotten plenty of social media love since the series aired, it was “magical” getting to see fans and hear them cheering (and honking) IRL from a responsible distance. It was also the first time she got to connect with some of the other Drag Race queens and reunite with Gigi Goode and winner Jaida Essence Hall.

Her monthly drag show Get Dusted is currently on hiatus, but Crystal’s busy prepping for her Wonderland tour in the United Kingdom, where COVID restrictions are a bit different. Performances will be outside and everything will be socially distant, but she’s excited to finally be seeing fans face-to-face even if it’s at least six feet away.

Like anyone, Crystal’s relationship with her Latinx identity has evolved over the years and it’s been her own journey, one only defined by herself. More recently, she’s trying to learn more about her heritage and talking to her mom and grandmother, recognizing that their struggles and life stories as Mexican women differs from her own. There’s also some other methods she’s embracing.

“I have a couple apps on my phone, I'm trying to teach myself Spanish,” she says. “And I've been watching Ugly Betty in Spanish, just because I've literally seen that show so many times I already know what they're all saying.”