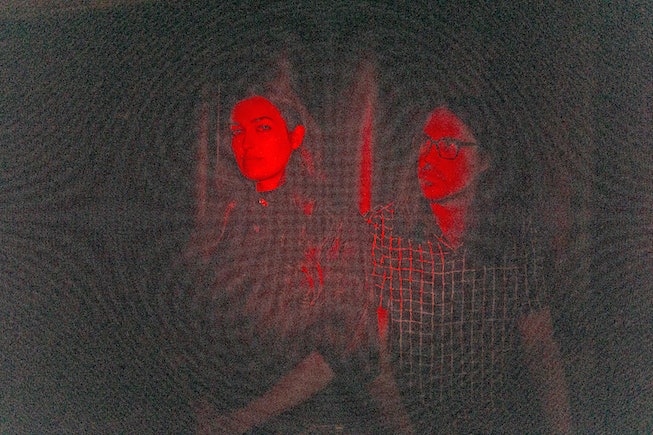 NYC duo Cults released their fourth studio album, Host, at the beginning of September. After some years of experimenting with beaming pop-rock tunes, the veteran dream-pop band has somehow now rotated its way back to the darkness-inflected, sugary synth-pop of their acclaimed 2011 debut record. Who could forget the classic Cults sound that was introduced by their gargantuan lead single "Go Outside" — mystic, moody, and mixed dark messages with sugary synth confections.

The 2020 version of that sound, now animated with real guitars and instrumentation, can be heard on album standout, "A Low," a song about depression that's wrapped up in a glittering synth-pop bow and feels just the slightest bit ominous, like stepping into a too-sweet, too-pink Candy Land. In fact, that's more or less the premise of the track's new accompanying video which NYLON premieres below. Directed by Jeff Striker, the new visual finds vocalist Madeline Follin wandering through a clearing of cotton candy clouds, human-sized lollipops and radioactive green foliage as she sings: "Eyes like a painting/ Watching/ Unfading/ Vacant figures..."

As Follin explains in an email: "This video was also shot on a smartphone and Jeff built a mini Candy Land in his living room and projected us into it. I love that he decided not to be too on the nose and create such contrast between the lyrics and the visuals."

Striker adds: "What I like about Cults is that underneath the moody atmosphere, there’s always a sweetness and that’s the side of them that I wanted to shine on for this video. [...]I think what’s powerful about the video for me is that Madeline is retelling one of her darkest moments while dancing in a candy land. She has made it to the other side of a rough passage and she’s sharing her experience and hope with us. It’s a very generous act."

Watch "A Low" below and read on for a quick catch-up with Cults.

I am sitting on my couch in New York City listening to the relaxing sound of someone jackhammering the concrete across the street from me.

As now-veterans of dream-pop, you have seen the genre drastically evolve over the last decade — how do you guys keep the Cults sound moving forward?

We are always practicing, reading, listening, and learning. I think each time we make a record we learn so much about what works for us and about the whole process that the sound kind of naturally evolves. When we’re making a record we always start by experimenting with new groups of sounds and ideas and we don’t ever really go back and explore demos from previous recording sessions because we want everything to feel fresh and not feel like we are rehashing old ideas.

Do you guys have a relationship with TikTok? If so, who's your favorite creator?

I love TikTok. Sometimes I will open the app and then look at the clock and realize that an hour has passed while I was scrolling through the recommended videos. I just discovered Vanessa Valdez who is a housekeeper that gives tips on how to properly clean things that people normally forget about/don’t know how to. I absolutely hate cleaning but after watching her videos I spent three days scrubbing the house. Also, Claudia Conway!

What are some exciting up-and-coming acts that you both are into right now?

The director Jeff Striker just released his record under the name Madget Nightly and we have been listening to that nonstop. We also are loving Munya, Faye Webster, and Charlotte Adigery.