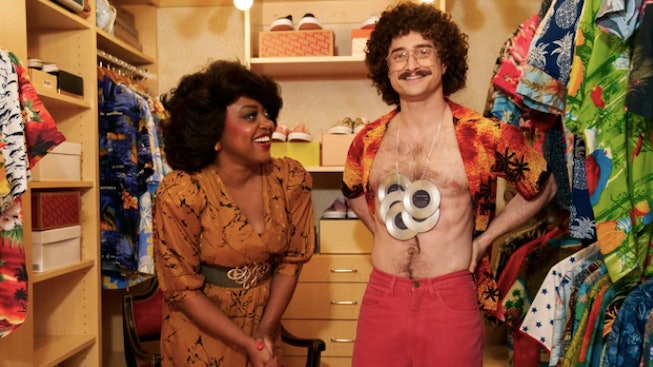 Daniel Radcliffe is the new Weird Al. The Harry Potter actor has officially signed on to star as Al Yankovic in an upcoming film for Roku titled Weird: The Weird Al Yankovic Story. The biopic will chronicle the artist's career path as both famous comedian and provocateur. “I am absolutely thrilled that Daniel Radcliffe will be portraying me in the film,” Yankovic said in a statement. “I have no doubt whatsoever that this is the role future generations will remember him for.”

Here’s everything we know about Weird: The Weird Al Yankovic Story so far:

The 32-year-old actress is taking her career to new heights and is playing Oprah in Weird: The Weird Al Yankovic Story. Brunson is the latest cast member to be announced and joins a roster of talented performers who will bring the project to life. Evan Rachel Wood will portray Madonna in the film, while Rainn Wilson plays radio broadcaster, Dr.Demento. Julianne Nicholson and Toby Huss are in the film as well, playing Yankovicks parents.

The first teaser trailer for Weird dropped Tuesday, May 3rd, and sees Radcliffe transform into Weird Al, signature curly hair and all. Watch below:

Weird will chronicle the rise of Weird Al’s career.

Per the film’s synopsis, “the biopic holds nothing back, exploring every facet of Yankovic’s life, from his meteoric rise to fame with early hits like ‘Eat It’ and ‘Like a Surgeon’ to his torrid celebrity love affairs and famously depraved lifestyle.”

Yankovic is involved in the film.

For the uninitiated, Weird Al, otherwise known as Al Yankovic, spearheaded the modern genre of parody music, building a name for himself by crafting clever (and often downright silly) remixes of popular songs. Since his debut in 1996, Yankovic has released five albums and won five Grammy awards.

While creating music, Yankovic also worked on various film and television series. He famously starred on MTV’s Al TV and The Weird Al Show, which used a combination of skits, guests, animated shorts and musical performances to create a pseudo-variety comedy show.

Yankovic hasn’t worked on a film since the 80s. In a statement released about the upcoming biopic, Yankovich expressed his excitement to jump back into moviemaking.

“When my last movie UFH came out in 1989, I made a solemn vow to my fans that I would release a major motion picture every 33 years, like clockwork,” he said. “I’m very happy to say we’re on schedule. And I am absolutely thrilled that Daniel Radcliffe will be portraying me in the film. I have no doubt whatsoever that this is the role future generations will remember him for.”

Weird will premiere on Roku.

Weird: The Weird Al Yankovic Story is being produced by Funny or Die and Tango Studios. Henry Muñoz III, the chairman and executive producer of Funny or Die, shared his excitement about the project as well. “Weird Al is a comedic genius and his impact on pop culture, his mastery of the music video, his award-winning music, and his incredible life are the perfect fit for the talented producers,” he said.

“We are honored to partner with Roku, Tango and our director Eric Appel on this important movie,” Muñoz continued. “Weird has brought together a weird and wonderful team of creative people, to tell the story of a man who has made people laugh and sing across the world.”

Though an official release date hasn’t been set, the film will be available to watch exclusively on The Roku Channel for free.