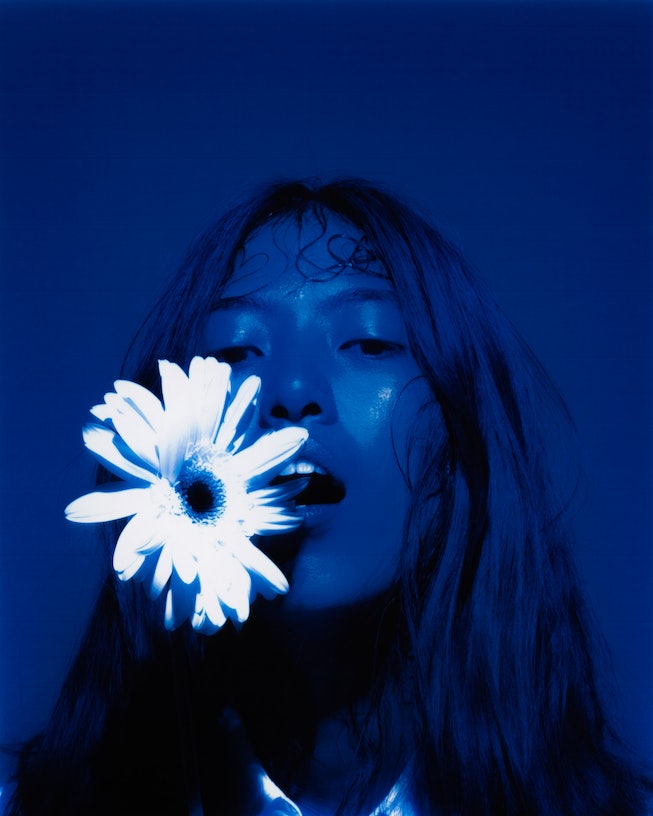 One can’t help but feel concerned when listening to Deb Never’s music. Across the eight tracks of her most recent EP, Where Have All The Flowers Gone?, the Los Angeles musician berates her own stupidity for pining after an ex; gets “f*cked up black out at another party” in the turbulent aftermath; selfishly prays her ex isn’t getting caught up in someone else’s orbit; dissociates; and admits to a slew of other toxic coping mechanisms.

It may sound ugly, but Never, 28, finds value in uncovering the grime beneath the hypothetical couch cushions. “It's one of those things where I feel like if I made something [honest], I'm sure there are people who are going through it,” she tells NYLON. “Like, ‘Whoa, I relate to this one on a deeper level than just vague statements.’”

Over the last three years, Never has quickly risen through the ranks of the crowded West Coast music scene, set apart by her brutally confessional songwriting and woozy, effortlessly cool sound: an oil-slick sludge of hip-hop, R&B, and intimate bedroom pop. No topic seems to be off limits and every emotion can’t be understated, making her songs a beacon for those who’d otherwise feel shame for also feeling their feelings so all-consumingly. For Never — who says she’s “really bad” at talking about herself — songwriting is her window to understanding herself and the world around her.

Zooming from London in early October — the city where most of the EP was created and where she’d just performed her first live show — Never dug into the making of her new EP, her perfectionist tendencies, why she’s secretly very sensitive, and her admiration for Billie Eilish.

Congrats on releasing your EP. Have you fully processed it being out in the world?

I think because I've been on the move I feel like I haven't processed it yet. But once I get back to LA, I'm sure it's all going to hit. So far it feels good and it feels like there's just more of a payoff for myself. Like what is it, a gratification? Like, it's finally out, it's off my chest. I can move on to the next thing. It's kind of like you're letting your baby go.

Where Have All The Flowers Gone? is eight tracks, so it's pretty long for an EP. Why'd you decide to keep it as an EP and not make it a full album?

I feel like I wasn't ready to make it an album yet, because I have an idea in my head of what I want for an album and I want to be able to present it in that way and create an even bigger world. The reason why I wanted this to be an EP is because it was meant to be almost like a stepping stone of growth and not a statement quite yet. Already in the difference between the first EP and this last EP, I always knew that I'm still capable of more, and that this EP was kind of a representation of that work. I know there's more in there.

Would you consider yourself a perfectionist when it comes to your music?

Yes. For a person who is so messy in real life, it's chaotic. I'm very disorganized, but music is the only thing where I'm like very... maybe to a fault because sometimes, I'll get in my own way, definitely.

What do your collaborators say? Are they like "Deb, it's fine. Chill."

Yes, 100 percent. Every time they're like, "You need to leave it alone." I’m like, "Nah, I gotta change this one word!" Or "The snare doesn't sound right." "No, the whole last part of the song needs to be changed completely!" But sometimes I feel like I have a hard time differentiating between being a perfectionist to a fault and going with instinct, like gut feeling.

What's a song on the album do you feel got the most revision?

I would say "Funky." "Funky" was my 13th reason [laughs]. “Funky” was the bane of my existence, but it was like a love-hate relationship. Because I'm like, I love this song enough where I want to keep working on it, but I hate it so much because I couldn't crack it. That whole song took me a year to write. I didn't want to just give up and I always knew it was good, even though I heard it on a loop for like 12 hours straight. I was still aware that it was worth doing because I knew deep down I loved it, even though I hated it at the time. Here's my toxic relationship.

I think severely, yes. I feel like music is such a subconscious thing so if that's what I'm writing and that's how that's the energy of it, I know that it comes from somewhere, even if I may not express it outwardly.

Where do you think it comes from?

I think I'm secretly sensitive. I know for a fact I'm sensitive, so I guess that's the reason why a lot of the songs sound like there's almost this push and pull or like this… this feeling of just being a simp [laughs]. As awful as it is to say, it's just, to simply put it, being a simp. This is a secret... Well, I guess it's not so secret anymore because it's now on a whole project for everyone to hear.

One song that really stood out to me on the EP is "Sorry." The music video feels very symbolic. Is the woman at the end supposed to represent your mom? That's how I interpreted it.

I guess you can interpret it however. I love open interpretations, but I guess the way I saw it is almost like an older version of me or a sort of alleviated version... freer version of me.

Justin Tyler Close [and I,] we collaborated on kind of getting the concept together and he already had such a great baseline of the concept and then we snowballed ideas of what every shot and what everything kind of means. I kind of let Justin take control of the concept. There's a reason why I wanted to work with him because he understood the song and the feeling so well and was able to represent that visually and I was like, "Okay. Yeah, I really aligned this concept. I want to work with you."

In the song, you're apologizing for partying. Is your partying something you're concerned with in real life?

No, not as much anymore. I feel like I'm very much a homebody. I mean, of course growing up, it was definitely a huge thing that consumed me, but I think I've gone past that point and I'm more in a Zen mode.

Honestly, being horizontal in bed, doing nothing. Because I feel like everything's been so chaotic and I'm constantly on the go. Any moment I can have to just be alone and lay down, I'll take over going out and doing the most.

You almost can't when you're on the road. You just physically don't have the energy.

In past interviews, you’ve talked about how writing music is a way for you to get your inner thoughts out. Is that primarily how you utilize songwriting still or has it morphed?

No, it's definitely still that, because I said if it wasn't that, what would it be for? I think that I would never want to lose sight of why I do this. I think it's like a form of relief and it's something that I still find fun, relieving, important, and therapeutic. I don't ever want to lose that.

I'm thinking about Billie Eilish and on her new album, there's this line about how something that she loved to do is now just keeping her employed. It’s sad to hear a hobby turn into something like that.

Yo, yeah. Shout out to Billie Eilish because I don't know how she does it. She's so young and able to keep her sh*t together, to still be able to do that. To me, if it gets to the point where I'm doing something that I love and what I love to do, I start hating, what's the point of doing what I love? I can just do what I fucking like. You know what I mean, I'm not going to do a job that I hate if I have... that's why it's so important to try to keep that kind of purity of remembering why we do this.

Obviously being so honest in your song writing can be very exposing. Is there anything you think you wouldn't ever write about or put into a song?

There's definitely a lot of things I still haven't really written about, or I guess I'm kind of scared to unpack or write about. And I don't know if it's one of those things where I'm scared... Not scared, but I guess I don't really write about it because it's something I'm almost scared to unpack myself or if I say it out loud, it's real. But yeah. There's definitely things that I think I still hold back for sure.

Do you see yourself working through it and hopefully putting that into music or is it like, "Okay, that's a boundary that I recognize is a boundary, and I won't cross it?"

At a certain point, I don't think that's a boundary that couldn't be crossed. I think it's just about when I'm ready to, but I'm sure if I do, it'll probably be the best album that I've ever made.

Deb Never’s Where Have All The Flowers Gone? is out now.