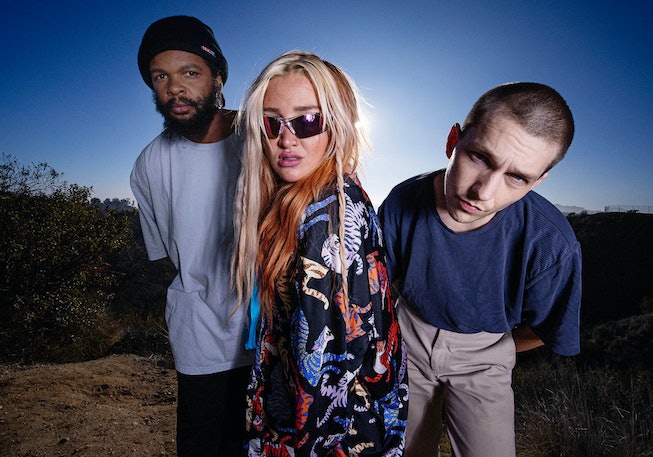 Dehd is really, really good at what they do: creating driving rock and roll that feels urgent, playful and present. Their songs feel perfectly fit for a road trip across America, compelling you to sing along as much as gaze out the window and pretend you’re in a movie. So it’s a little funny how much of the discourse around their new album, Blue Skies, out now, is about how similar it is to their last album Flower of Devotion.

Their view? Why fix something that isn’t broken? “We’re just being ourselves and I think we do it well,” vocalist Emily Kempf tells NYLON. “The amount of money or the production, that’s what changes. But our ethos remains the same and I think that is positive and worthwhile.”

The Chicago-based trio — composed of Kempf, guitarist Jason Balla and drummer Eric McGrady — released Flower of Devotion in 2020, a charming, playful collection of indie rock songs that Variety called, "one of the most lively and inspired rock albums to come down the pike in recent memory.” On Blue Skies, they go to even greater heights, challenging themselves in ways that might not be perceptible to the average listener. Blue Skies feels like Flowers of Devotion with every dial turned up — not just production-wise but vibes-wise as well, conveying a renewed sense of optimism, horniness, and a punk rock snarl that doesn’t care too much about anything. On “Empty In My Mind,” Balla and Kempf sing in nasally, commanding harmony: “Give me all of your heart tonight/ Kiss me like we’re out of time/ Empty in my mind oh!/ Empty in my mind oh!” atop a punchy lead guitar. It’s an album that will stretch your legs and your heart, in the tradition of dance music like Moodymann and three-chord anthems that feel stripped down and never stray too far from their core.

Over a Zoom call, NYLON caught up with Dehd’s Kempf and Balla just before they embarked on their tour to discuss how their new album has been perceived, what they want audiences to take away from Blue Skies, and how they cultivate an intuitive creative process.

How’s the tour going? I saw you at Pitchfork last year and your shows are as fun to watch as they are to listen to. Has the performance aspect always been important to you all?

Emily Kempf: I personally live for the performance. I love being onstage and I love being in this band particularly because I get to do all the things I’m good at and I get to have the most fun. I thrive on the stage; I guess it is apparent. I think we all do.

Jason Balla: It's funny because I’m pretty quiet in my day-to-day life and I had this epiphany on this tour. I’m like, “Oh I actually am a performer. It’s crazy.” I love to play onstage so much and it’s the time and place to do what I don't do in my normal life, like be loud and obnoxious.

There’s been much written about how this album is similar to your last. Do you guys see it like that? What album did you all set out to make?

Balla: I think it’s kind of funny because I think it’s a lot different. There are definitely common threads to it but we were in different waters than we were on the other one, but I get that it’s still a rock ‘n’ roll record.

Kempf: I agree. I agree with what’s been written; I do think it’s similar to the last album, but I don’t think it’s a bad thing. It’s not a bad thing to do something well. It’s actually a recipe for success. That’s my perception of it, like, “Okay what would you have us do?” Like shut up. I think we did a good job doing what we do and writing songs that are fun to jump around to and we’re not trying to reinvent the wheel. They’re not the same, but they are twins and I think it’s cool and it’s more of the same awesomeness. Our last album might be a little bit further from it but I like that we expand ourselves and challenge ourselves on each album in baby steps because I think that speaks to a longevity that we might have as a band if we can not get too wacky.

Balla: I agree with you on the spirit thing, but I do feel like we did some different things.

Kempf: Yeah, it might not be perceivable to the masses. From a production standpoint, we did a lot of different things. But also when a band does well, they’re expected to do so much better on the next album, especially when the band gets really popular. I feel this way about Angel Olsen, actually. There’s a built-in popularity and you're expected to exceed that by a million yards. but really you’re just doing what you do best, and it's a continuation, and it gets harder to be liked the more popular you get because people expect more from you in a way. But to me, if what we’re doing and our team and our friends and our fans like it, the rest doesn’t really matter. Sometimes it feels like bands aren’t allowed to change or aren't allowed to stay the same either. I don’t know what you do with that.

Balla: We’ll see what everyone has to say when we make our next record a dubstep record.

Kempf: When you’re the underdog and you’re doing what you do well, everyone wants you to succeed. But some people don’t want you to get too high. They want to keep you down or something. I feel this energy of like, okay uplifting uplifting, and then almost this possessive weirdness like, “I’m the one that discovered it.” But if you get too good, it’s like, “Mmm don’t get too good. You gotta stay in your box.”

“Sometimes it feels like bands aren’t allowed to change or aren't allowed to stay the same either.”

If there was a mood board for this album, what’s on it? What feelings do you want people to take away from it?

Balla: It’s gonna be a pretty crazy moodboard. One of the first things that comes to mind is Moodymann and dance music in general. What would be on yours, Emily?

Kempf: Being vulnerable, being able to move and dance in public in a crowd, having fun at shows. The way we write music is definitely conducive to that stuff. In general, I write a lot about love in its many forms and try to keep writing interesting angles to that and that’s an endless topic that everyone can relate to forever and ever. Just reminding people to have fun and work through the hard patches. I feel like that’s the vibe of the album. Coming out of the pandemic and reentering society, we all need to remember to be chill and have fun and not put our heads in the sand per se and ignore the despair and the destruction whether personally or in the world. But there's gotta be a balance.

I read that when you’re in the studio, the music you create together feels more intuitive, with less self-editing. I also read that you had more studio time for this record. Is it as easy to not self-edit when you have more time?

Balla: I think the writing process happens really fast and that’s the intuition period. In the studio, we have more time especially for me to intuitively explore, but in a lot of areas where we wouldn't normally have time to access all the little toys in the studio. I would never have some of these synthesizers and stuff like that. There's more play time, but one of our strong suits is we are good editors too, so we get everything on the page and then start yanking away everything that doesn’t need to be there.

Kempf: We’ve just had more time to allow ourselves to be intuitive and to self-edit because the intuitive writing process, there’s not that much editing. But then the after-part, we wrote like 30 songs so we wrote three more songs than we had in the past, and we had more time to edit it down.

What is different about this album? What’s the stuff the ordinary listener may not hear?

Balla: As far as mood, there’s more optimism than there’s ever been, but also I think we’ve gotten out of our structure a little bit. It feels like less rock to me and more songs, where, like the first song, it's just piano. We were trying new instruments and also thinking about how to serve the vocals and less about any prowess on any instrument. It was like, “What delivers these words the best?”

Kempf: I think it changes the production. I think all of us personally challenged ourselves. Jason, the way you delivered the vocals took it up 50% more, and Eric’s only using two drums but he expanded on that as well. For me, those are huge steps that we’ve taken. It’s a little bit more polished and we all challenged ourselves a little bit more than usual, but not in a way that's obscene or crazy. I was like, I’m gonna focus on harmonies.

Balla: Eric has always complained to me, he’s like, “I can't hear the drums in the mix,” so where normally people would be like, Emily’s voice and my guitar, that would be the two things, this one was like, the voice and the drums and everything else is this pillar foundation to hold it up.

Blue Skies is out now.