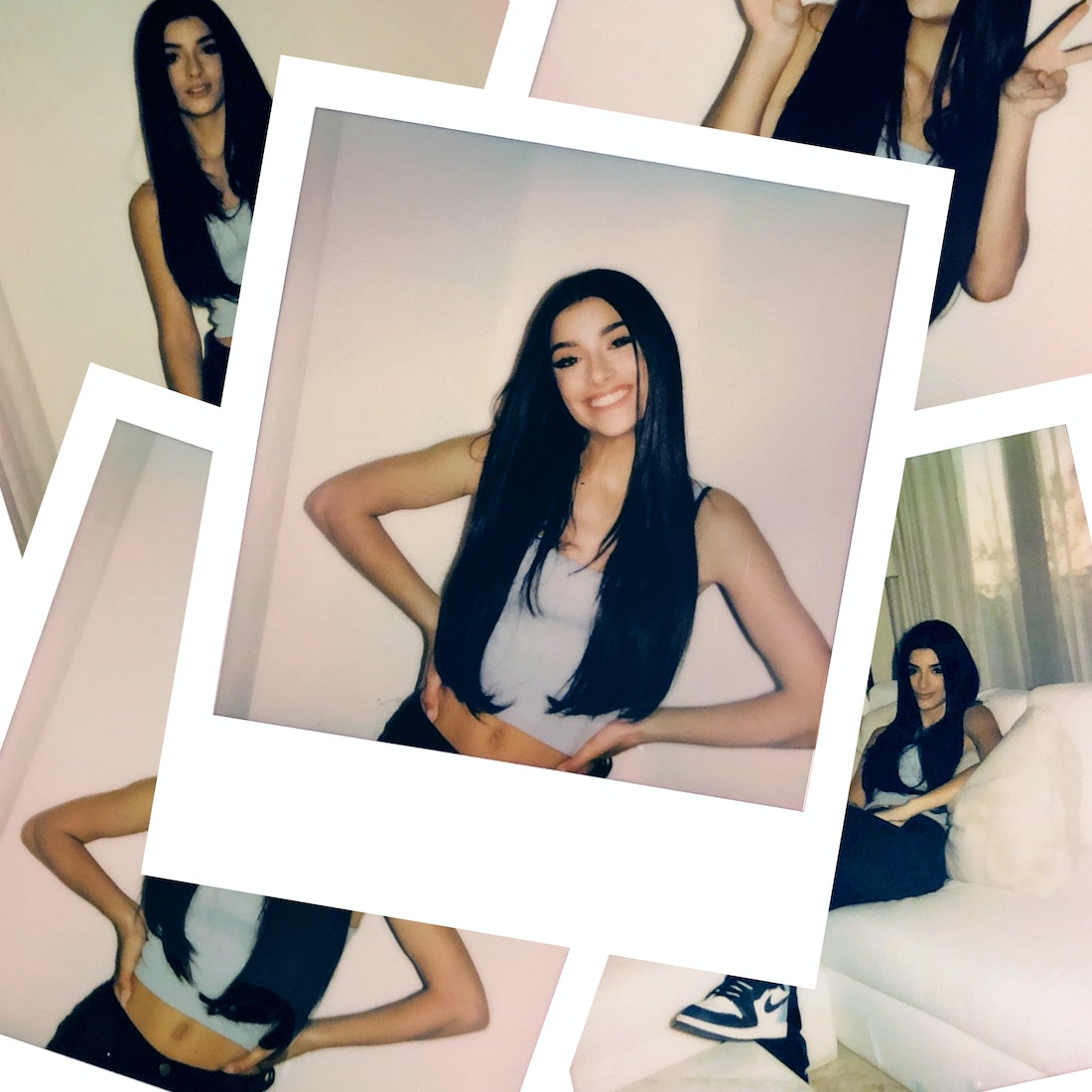 Dixie D’Amelio Is Watching You

How the 19-year-old TikTok star has eclipsed the app that made her famous.

Dixie D’Amelio spends a lot of time on TikTok. That might seem like a given — with 40 million followers, she is the ninth-most followed account on the app — but the 19-year-old is no casual voyeur. “Honestly, hours,” she says of the time she gives — which, with each new follower, becomes more and more precious — to scrolling on her For You page. “I could stay up all night doing it, which is a positive and a negative thing. It's positive because I get to see everyone's videos. It’s negative because I don't sleep at night.”

This is all to say, Dixie D’Amelio might, and probably, has watched your own TikTok. And then some. “Sometimes someone will make a video about me, and I'll go to their Instagram, and then I'm looking at their VSCO,” she explains from her room in the D’Amelios’ Los Angeles home. (She’s soon moving out to an apartment of her own about 20 minutes away; “I'm very excited because I was supposed to be in college and I'm like, ‘OK, I need to mature a little bit, and I'm not going to do that if I'm here and know I have you to lean back on all the time.’”) “There are so many people that came up randomly on my For You page, and I know everything about them just because I've gotten [into] this deep internet hole where I know their whole life,” she continues. “It’s happened to the point before where I saw someone wearing a dress that was on their Instagram a while ago, and I DM them, ‘Hey, this is so random and weird. But, where'd you get this?’”

Back when her younger sister, Charli (the app’s most-followed account, with 91 million followers), was starting to blow up with her dance videos made in their childhood home in Connecticut, D’Amelio thought the whole TikTok thing was cringey. Millions and millions of followers and a move to LA later, she’s changed her tune a bit — though you still won’t find her doing elaborate dance routines, intricate cosplays, food tutorials, or any other trendy, niche corner of TikTok. “I just have fun with it,” says D’Amelio. ”I try to keep my content the same as it always has been because that's why people followed me. So I try to stay with what I know. I’m still surprised when the ones that take really no effort [become popular], where people are like, ‘Oh my gosh, classic Dixie.’ [But,] honestly, the ones that I do put effort in, I'm like, ‘Oh, this is, this is too much. I'm embarrassing myself.’ And then I end up deleting it. I actually just did that the other day. I did a transition video and I was like, ‘What did I just do?’”

In sticking to her natural instincts, D’Amelio has carved out a special place for herself in the era of the TikTok star that has subsequently eclipsed the confines of the app. On July 1, she released the music videos for her first-ever song, “Be Happy,” a bittersweet depression bop that has gotten more than 86 million views to date. (The remix video, featuring Blackbear and Lil Mosey, released Sept. 20, has 16.5 million views, and the behind-the-scenes video has an additional 17 million.) The song is not some fleeting pursuit of pop stardom, but rather a longtime passion project — and a savvy career decision.

“When I started all this, I wanted to find something I enjoy doing because I don't obviously just want to be posting on social media forever,” she explains. “I love and enjoy that, but I would love to make a career out of [music]. And I don't think I would've done it if quarantine didn't happen because I just was nonstop traveling.” D’Amelio, a self-described fan of every genre, has been using the downtime to experiment with different sounds and styles to determine what works for her. In a prime example of her rising celebrity status, she demurs expertly when asked about whether a full album is coming up. “I don't know what I can say about that because I'm definitely working on new music coming out very soon,” she hints.

Secret music projects aside, when it comes to the world of the D’Amelios, there’s plenty to talk about. In August, Dixie launched The Early Late Show, a weekly video spoof of late-night talk shows where she interviews her friends and peers on her YouTube channel. “It honestly just started as a joke because I just wanted to post two days a week on YouTube and I was like, ’OK, let's just do a show and make it up and make it serious but also very not serious,’” she says. ”I don't prepare any of the questions. It just kind of goes with the flow and people actually ended up liking it.” What started as a joke turned into YouTube gold that garners millions of views, thanks to D’Amelio’s off-the-cuff nature and casual ability to bring up certain topics that talk show hosts decades into their careers wouldn’t have the gall to do. For example, in her most recent video featuring Chase “Lil Huddy” Hudson — the ex-boyfriend of little sister Charli — D’Amelio begins her interview by bringing up some online drama between the two over one of Hudson’s tweets back in July (literal ancient history to teens), apologizes, and transitions with the question, “Why not Big Huddy?” Next, she earnestly asks, “Is it hard basically being the punching bag of the internet?” The Jimmys could never.

Less than a year into her newfound fame, D’Amelio has come to terms with the fact that the private lives of her and her friends have become public fodder. “I'm so trusting, even when I shouldn't be, but I'm just like, ‘They're young. Everyone's young doing their own thing. It's just the way people are,’” she says. “My friends are the first people that I met when I came out to L.A., and they are honestly the most genuine people. And that's why I'm happy. When I met everyone I had no followers. I didn't even do TikTok when I came out here. So having them still treat me the exact same as they did on the first day I met them, I think that's what’s really important. Chase Hudson, Thomas Petrou, Nick Austin, and Ryland Storms were the first four people I met, and we clicked immediately. I'm very shy meeting people for the first time, but they were just all so welcoming and they treat us the exact same. They still bully us like brothers, but are always there and will say something to someone if someone's messing with us.”

What’s more, D’Amelio has nothing to hide. She puts out what she wants to put out and keeps private what she wants to keep private. When something is wrong, that’s when she’ll speak up. “If someone is hating on me and is like, ‘I hate her. She's ugly,’ I'm like, ‘OK, fine. That's your opinion,’” she asserts. “What I mostly respond to is just lies. I hate that. I always tell the truth when there's false things about me. That's when I try to get more involved. I'm like, ‘No, this is actually what happened. This is how it is.’” This is the catalyst for her latest project, a podcast debuting later this month with Charli called 2 Chix, on which the pair “can talk about our thoughts on tea or drama and kind of more of our realness that we don't put out on comments online.”

Soon enough, they’ll be a full-on D’Amelio family reality show, as well, as confirmed by the family earlier this summer. “I’d rather know when people are videotaping me,” she says of agreeing to the show. “Because I can go out in public and I wouldn't even notice cameras and I'm eating grossly or whatever. Then I watched the videos later and I'm like, ‘Oh my gosh, I didn't even know.’” The format of the show and further details remain under wraps, but D’Amelio says that the plan is to show the “other side” of social media stardom. “People are like, ‘Oh, what are they going to just do TikTok dances the whole time?’” she jokes. “Yes, that's what it looks like from the outside. But we put in a lot of work every day to create content.”