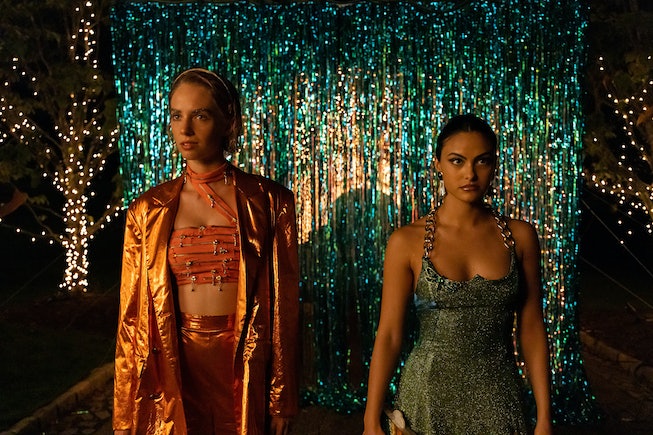 A new Hitchcock-style, high school revenge thriller is in the works from Jennifer Kaytin Robinson, the mind behind the 2019 romcom Someone Great. The new dark comedy Do Revenge will star Stranger Things actress (and NYLON cover girl) Maya Hawke, Riverdale’s Camila Mendes, and will feature a cameo from Sophie Turner.

Here’s everything we know about the film so far:

The Do Revenge plot is a dark twist on a high school comedy.

In an interview with Elle, Robinson said she wanted to deconstruct the classic “high school movie” with a Hitchcock-style twist. “We backwards-engineered this story of revenge off of: What would it be like to take the fun, thrillery stakes of a Hitchcock movie and put it in high school?” she said.

The comedy is about “two young women who join forces to take down each others’ bullies,” Elle reports. The pair consists of Drea, played by Mendes, and transfer student Eleanor, played by Hawke. Drea wants revenge on her boyfriend for leaking her sex tape, while Eleanor wants to get back at a girl who started a rumor about her.

“I think there are different points where everyone’s the villain and everyone’s the hero in this story,” Robinson told Elle. “And that is so much of what growing up is. I wanted to make something that paints with all the colors of adolescence.”

The Do Revenge cast is stacked with young Hollywood stars.

The first trailer for Do Revenge shows Mendes and Hawke taking down their enemies for each other.

The first trailer is a fun twist on a typical high school movie. Skewering modern day teen culture, the trailer pairs up fallen Queen Bee Mendes with outcast Hawke to take down their respective enemies. Abrams plays an insufferable character in Max, who starts a “Cis Hetero Men Championing Female Identifying Students League” as repentance for leaking her nudes. Watch below:

Do Revenge hits Netflix this fall.