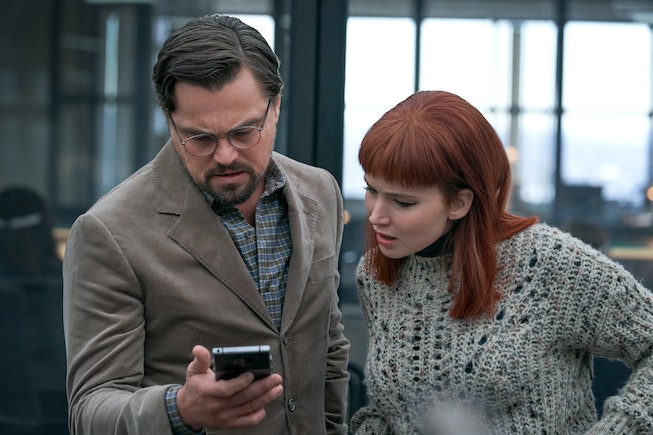 According to Meryl Streep, her new project Don’t Look Up is “maybe the best movie ever made.”

For someone with a shelf full of Oscars at home and a lifetime of iconic films behind her, that’s no small statement. But there are a few things that set Streep’s newest film apart from all the rest. First off, it boasts an unbelievably star-studded cast: Streep appears alongside Leonardo DiCaprio, Jennifer Lawrence, Timothée Chalamet, Cate Blanchett, Jonah Hill, Ariana Grande, Tyler Perry and Kid Cudi.

But even more significant than the cast is the content. Don’t Look Up is about the biggest threat facing humanity: climate change.

“It’s the most important movie of my lifetime, no question,” Streep said in an interview with Netflix. “All of the questions of equity and justice and everything flows from our survival on the planet, and if we don’t have that we don’t have anything else.”

Written and directed by Adam McKay, the mastermind behind The Big Short and Stepbrothers, Don’t Look Up is, on the surface, the story of grad student Kate Dibiasky (Lawrence) and her professor Randall Mindy (DiCaprio) who discover a giant comet headed for Earth. As they try to warn the world of the impending danger, they come up against general disregard from all the people with the power to actually do anything about the problem, from a Trumpian presidential figure (Streep) to a yassified talk show host (Blanchett) to an optimistic tech billionaire (Mark Rylance).

On a deeper level, though, the film is a satire about what happens when humanity is unwilling to take needed action to save our species and the planet we live on. In the film, the biggest threat isn’t that people don’t know what to do to keep the comet from extinguishing all human life, it’s that political maneuvering, a lack of urgency, and greed keep getting in the way. The parallel with climate action is clear: humanity knows what to do to solve the problem (namely, stop burning fossil fuels and protect the oceans and landscapes that naturally pull carbon out of the atmosphere), but a similar set of obstructions to those in the movie have gotten in the way of climate action that matches the scale of the problem.

Though the film arose from a sobering reality — McKay said he was inspired by journalist David Wallace-Wells’s book The Uninhabitable Earth, which lays out the consequences of climate change with devastating clarity — the result is, improbably, a laugh-out-loud comedy.

“It’s the funniest script I’ve maybe ever read,” said Jennifer Lawrence in a Netflix interview. “To bring humor and satire to… the biggest problem facing humanity? It’s really a job that only Adam McKay could pull off.”

But should we even be laughing about climate change in the first place when it has caused, and will continue to cause, so much suffering?

That’s a question that McKay seems to have anticipated. There’s a scene in the film where Dibiasky and Dr. Mindy go on a talk show to share about the “planet killer” comet and the talk show hosts (Blanchett and Tyler Perry) keep making witty jokes about it. Dibiasky eventually breaks down and yells at them: “Maybe the destruction of the entire planet isn’t supposed to be light! Maybe it’s supposed to be terrifying!” But just as the viewer might be nodding along thinking she’s right, and that it’s kind of twisted to be sitting in the theater laughing about any of this, Lawrence’s character goes on: “You should stay up all night every night crying because WE ARE ALL GOING TO DIE!”

Despair, we’re left to conclude, might be reasonable given the stakes of the problem — but it’s obviously not the best way to live. So why not laugh? The film isn’t trying to make light of an existential threat so much as trying to encourage viewers to engage in a way that allows them to see the problem without getting so scared by it that they shut down.

And the film isn’t just jokes, even if it is a comedy. While DiCaprio and Lawrence’s portrayals of scientists on the verge of nervous breakdowns can be comical, they also serve as an unsettling reminder of the very real toll of climate anxiety. On the flip side, there are surprisingly moving moments when the film shines a light on what we stand to lose if the crisis isn’t averted: each other.

Don’t Look Up’s ability to walk the line between these poles of hilarity and sobriety are part of what made it stand out to many of the stars who signed on. At a talkback after a screening in New York this week, Leonardo DiCaprio noted that he’d been looking to work on a movie about climate change for decades, and that he felt McKay finally “cracked the code” on how to tackle such a hairy subject.

Ultimately, it’s hard to say whether or not the $75 million spent on making the film will translate into greater awareness of and willingness to act on climate change, or if it will just make audiences laugh for a couple hours. But DiCaprio, who’s been outspoken about environmental issues for years, seemed hopeful.

“I don't want to sit up here and say we're going to change the world with a movie,” he said. “But this film is trying to provoke a conversation, and that's the best thing to possibly do with art.”