How one viral song changed everything — and what’s coming next. 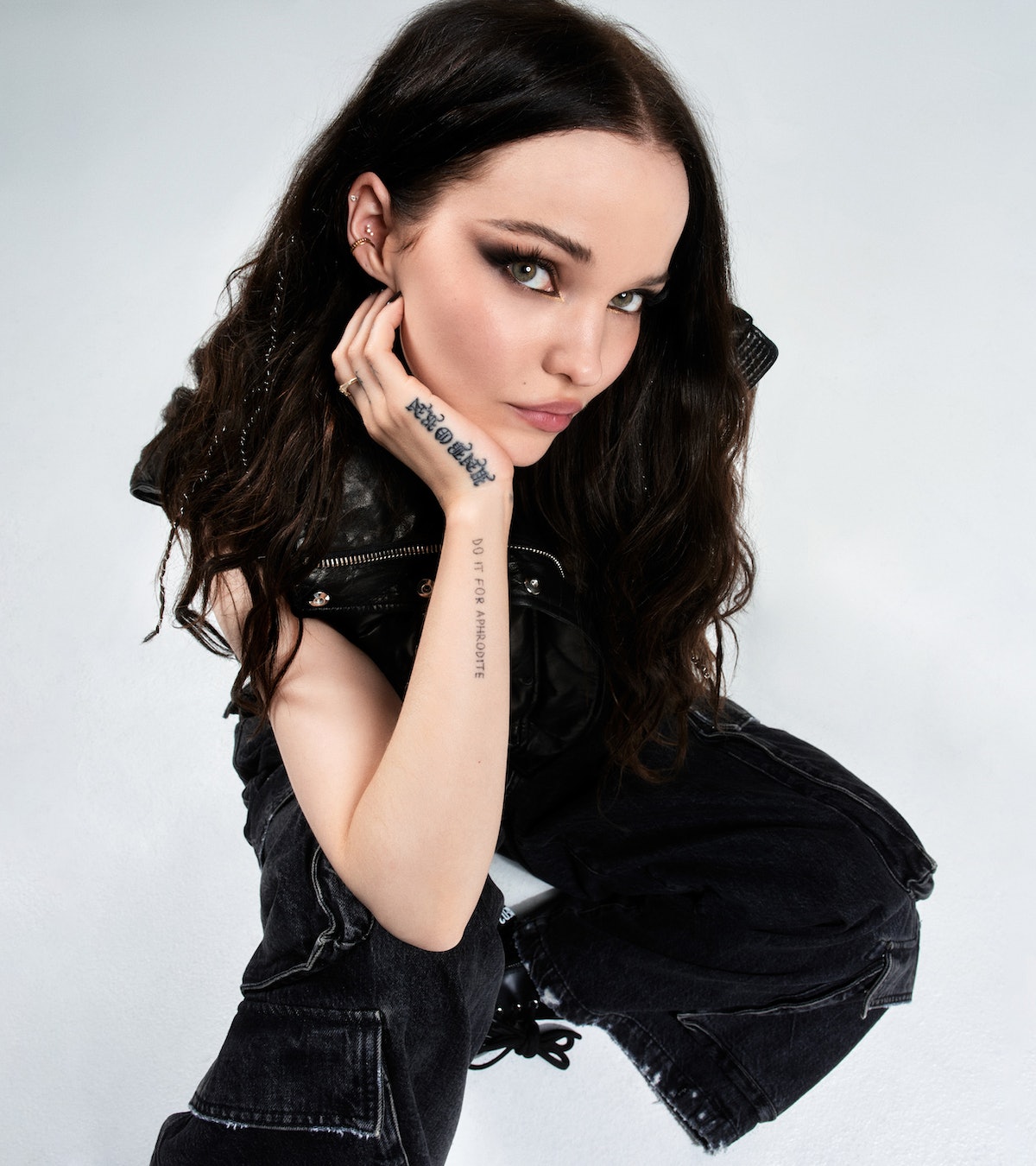 Dove Cameron didn’t plan on becoming a pop star — at least not right now, and certainly not like this. “This was all completely accidental. I didn't have a moment where I was like, ‘All right, 2022 is it.’ I didn't even think I would ever have this career,” admits Cameron. The “this” she’s referring to is a hit song, “Boyfriend,” a sultry queer anthem released in February, that has gone platinum and peaked at No. 2 on the Billboard charts. She’s also referencing two Best New Artist trophies, courtesy of the MTV Video Music Awards and the American Music Awards, and a prominent billing at JingleBall. Plus, her two subsequent hit singles, with a new one, titled “Girl Like Me,” out Dec. 9, and a debut album on the way.

Speaking with Cameron on a Thursday in late November, it's during what’s becoming an increasingly rare free moment (“free” in heavy quotes, since this interview is still work for the 26-year-old artist). When she calls, it’s in between rehearsals for that weekend’s American Music Awards and the upcoming JingleBall, and for the 30 minutes that we chat, she’s fully horizontal. “I'm literally lying on the floor right now because I haven't really caught my breath since February of this year,” she says. “It continues to shock me how this whole year has unfolded, and I haven't really quite adjusted or taken time to step back and take stock of what's happened. If at the top of the year you would've told me that this is what 2022 was going to look like, I wouldn't believe you, because it seems impossible.”

As with many things in the music industry these days, Cameron’s whirlwind started with a TikTok. But this was no PR bid to go viral — it was simply a live video of a mirror selfie with a clip of a newly finished song with no immediate plans to be released playing over it. “I'm really bad at using TikTok if I'm honest, and that's not me trying to be cute or anything. I genuinely just don't enjoy it,” she reveals. But this was the butterfly-flapping-its-wings moment; she posted the clip and went to bed. In the morning, things had already shifted. “I woke up and everybody was like, ‘Dude, go look at your phone right now,’ and I was like, ‘Oh f*ck. What happened? Is it politics? What disaster is going on now?’ No part of me thought it had to do with my TikTok.”

Refreshing her page, the numbers were going up by the second. So, she did what anyone else in that situation would do — she freaked out. “I'm a highly traumatized individual, [so] anytime something positive or negative happens that is really extreme and immediate, my nervous system has this very interesting reaction where it's like, ‘Oh God, batten down the hatches. Something's happening.’ Eventually I finally answered my one manager that I was close to. I was, ‘Dude, I don't know what we're going to do about this. I'm very nervous about this,’ and then we've just been kind of playing catch-up ever since.”

Cameron is no stranger to the grind of the entertainment industry. By 16, she was already headlining her own Disney Channel show, Liv & Maddie, where she starred as both titular characters (twins!) for four seasons. She went on to lead the channel’s popular Descendants franchise, while also appearing on shows like Agents of S.H.I.E.L.D. and Apple TV’s Schmigadoon! (on which she currently stars), as well as this year’s Vengeance. Still, the transition from TV and film to “the whole pop-star gig” has proven to be a challenge. “When you're doing the music deal, you're a one-man band. It's all about you. It's all on your shoulders. There are 15-, 16-hour days where you're giving all that you have creatively, physically, mentally, and then on your day off you go to rehearsal. Really, it requires all of you in every regard, and no one can do it but you. You're the president of the club.”

It’s taken time for Cameron to come to terms with her new position in the center of the hurricane. “I was so overwhelmed at the top of the year feeling like I didn't deserve the success,” she says now. “Feeling like I was the last person who should be elected to perform this song, all this stuff. I just had all these narratives about myself and I was still accepting myself and my public identity of now being out and queer. It was just a lot all at once.” This fall, she had an extended version of today’s floor lie-down: a full month, by herself, in Paris. “I had to leave the country, I think, to get enough space to be like, ‘OK, I think I could probably do this and keep this up,’” she says, adding later, “I think I have two modes of operation. I have extreme self-doubt and then radical self-belief, and basically nothing in-between. I sit in self-doubt and then in six months, something snaps and I'm like, ‘F*ck everything that everybody else thinks I need to be doing. I know exactly what I need to be doing.’"

One such awakening happened this June when, on the heels of Roe v. Wade being overturned, Cameron, with a new single “Breakfast” and its music video in the can, felt physically incapable of doing press for the single. “[My label] was like, ‘You need to promote this song,’ and I was genuinely unable to. I was barely showing up to work with enough energy doing the scenes. I was so depressed. It was just a terrible, terrible, terrible time in the world for everybody.” The already-shot “sexy” music didn’t resonate, and on Cameron’s insistence, they scrapped the whole thing, shooting in its place a biting satire of a woman’s position in society that was immediately reposted by Gloria Steinem. Making political pop music is not Cameron’s agenda, she says, but rather something that comes through organically as a self-described highly political, impassioned, and community-based person (or “a Capricorn”) — just like how “Boyfriend” happens to be a queer love song because it happens to be written by a queer person. “It's just a part of my genetic makeup to be involved in these conversations,” she adds.

In November, when accepting her AMAs Best New Artist Award, Cameron used her allotted one-minute speech to directly address the queer community on the heels of the mass shooting at an LGBTQ+ club in Colorado. “I want to start by saying that every award that I ever win will always first and foremost be dedicated to the queer community at large," she began. "You guys have carved out such a space for me to be myself and to write music about it and I've never felt safer or more loved or more supported and I hope I can give you some semblance of that same feeling in my music," she said, later adding, “I want to remind everyone how important queer visibility is and how important our community is. And I want to direct your attention to organizations like GLAAD and the Trevor Project for what you can do right now.”

It was a powerful, personal moment for everyone in the audience, not to mention hundreds of thousands of at-home viewers, and one that has taken years to get to for Cameron. “I grew up in the public eye starting super young and so self-hating. I felt like I had to be anything other than what I was,” she says. “When you're representing a company as an actor, [you're aware] that you are an employee. You need to make sure that at the end of the interview, you're not only representing yourself well, but they've walked away with a good taste in their mouth for the company that you are the little mascot for.” Now, she says, “I feel unable to be anything except for how I feel that day.”

The fact that all of this came from a song based on a poem she wrote about a specific night in October is not lost on her. Her forthcoming album was originally character-driven, told from the point of view of villains; over the last few months, it’s transitioned into something far more personal. “The album has gotten a lot more vulnerable as I've allowed myself to be more honest with myself,” she explains. “You find yourself in more conversations like, ‘What would the lyrics be here if I was just to say the most gut-wrenching truth that everybody's going to relate to?’ Then you're face to face with your own stuff. A lot of stuff on the album is kind of ugly; things that I would've felt self-conscious sharing before, because it's incredibly human and vulnerable. Now those are the songs that are my favorite.”