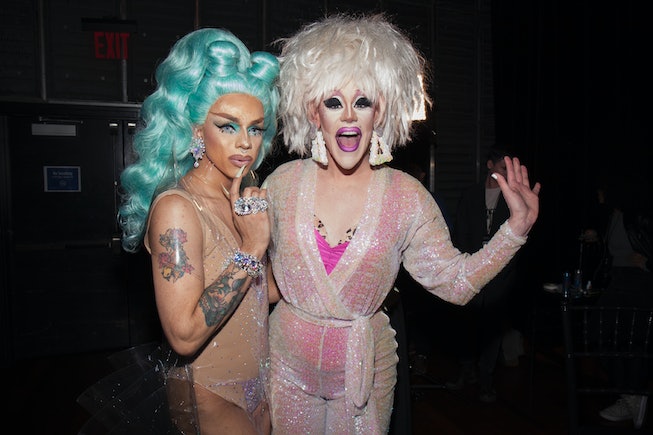 This article is adapted from HOW YOU GET FAMOUS: Ten Years of Drag Madness in Brooklyn, out June 7 from Simon & Schuster. Order it now here.

One Tuesday night in January 2012, a drag queen named Thorgy Thor was on a break between sets at Saliva!, her weekly show at the Ritz on Forty-Sixth Street in Manhattan, when the bar’s security guard approached looking worried.

“There’s five or six queens outside with no ID who say you’ll vouch for them,” he told Thorgy.

In five years, Aja would become one of the most recognized drag queens in the world after appearing on season nine of RuPaul’s Drag Race, but tonight, accompanied by her sometimes-boyfriend Esai Andino, she was a seventeen-year-old hoping to help her mother stay afloat by getting paid to dress in drag. Though her first experiences had been largely disastrous, drag was still easier than getting a minimum-wage job at the bodega and more reliable than bumming cash from her friends. The best way for a newcomer to get money was to win contests. Competitions like Beat That Face!, So You Think You Can Drag, and Miss Gay South Pacific came with a cash prize for the winner, plus a chance for a queen to show her skills in front of more established performers, many of whom had the power to book paying gigs at bars across the city.

But once granted access to these clubs, Aja and Esai discovered that a current of rivalry and judgment buzzed through the scene. There were always more queens than opportunities. Job security and money were never guaranteed. And, like all divas, drag queens were loath to share the spotlight. When Aja and Esai performed, the other queens always had something to say. Get your brows right. You’re ghetto. You look gross. Some of these performers had been doing drag for a decade and had strong opinions about how young queens should look, paint, and act. They enforced unspoken but well-established guidelines. Manhattan audiences expected glamour. A flawless presentation was paramount.

Teenagers with no money and no experience, Aja and Esai were not particularly glamorous, and they certainly had flaws. Many of the established queens they met in Hell’s Kitchen bars expected deference from Aja and got attitude instead. Esai was younger and less likely to lash out at strangers when he felt disrespected, but Aja was a fighter by nature — she just wouldn’t show the older queens the respect they thought they deserved. The teenage crew quickly earned a reputation for chaos and drama.

“I was being me,” Aja later said of these early struggles in the scene. “I was being hood. People were like, ‘Oh my God, she’s so angry, she’s out of control.’”

Thorgy Thor had heard rumors that Aja and her crew — who she suspected were underage — had been popping off and getting into arguments all over town. But Aja had been to Saliva! a few weeks earlier, and Thorgy had watched her give a fierce, if somewhat amateurish performance.

Oh, what the hell, Thorgy thought. “Let them in,” she told the bouncer.

“It’s on your reputation,” the bouncer said.

Thorgy nodded. The young queens rushed inside and marched toward the DJ booth at the back of the club. Thorgy stopped the teenagers in their tracks. “Do not steal, and do not be a mess,” she said, before instructing Aja and her friends to give the DJ their songs.

If any show in New York City was going to welcome a group of chaotic teenagers from Brooklyn who liked to dance and fight, it would be Saliva! At the center were the three hosts: Veruca la’Piranha, a queen from Pittsburgh who claimed to be the first drag queen to ever perform a Lady Gaga song and hailed from a spooky, punk rock drag family called Haus of Haunt; Azraea, a bearded queen who ardently rejected the notion that drag had to be feminine; and Thorgy Thor herself, a self-described “drag clown” who poured a steady stream of manic, sometimes vicious, always campy energy into her performances across the city.

In the überglamorous, hyperfeminine world of Manhattan drag, Saliva! was the refuge for weirdos, art school kids, and people whose personalities were too big and raucous for the more conventional scene. At Saliva! there was no pressure to keep performances glamorous or accessible to straight people and tourists. The shows were full of inside jokes; homemade seven-minute song mixes that included dialogue; rude impersonations of bored housewives and butch lesbians; and costumes made from Halloween store castoffs, fabric scraps, and reimagined household goods. Polish was of little concern. Performances could be conceptual and sometimes downright stupid. People did eight-minute interpretive-dance numbers and wrote raps dissing other queens. They pulled things out of their asses and put them back in. They yelled. A lot.

A workhorse with a lot to say, it had taken Thorgy six years of constant striving to finally claw her way to a top spot at the Ritz. She’d developed her drag persona as a student at the State University of New York in Purchase, just outside New York City, which had a lively drag scene. For the school’s annual Fall Ball, Thorgy debuted “Thorgy the Swan,” a number later perfected at Saliva!, in which she emerged in a white leotard and tutu, her hair in a giant turban done up to look like a bird’s neck, as music from Tchaikovsky’s Swan Lake played. While she camped it up, trotting back and forth on tiptoe, a voice-over told the story of “a swan named Thorgy, on her way to the market to buy Swan Weekly magazine, granola bars, and a Tide bleach pen.” The details changed over the years, but in every iteration of the number, Thorgy took a wrong turn, was threatened by hunters, and shot them with a handgun she pulled from her purse.

After graduating in 2006, Thorgy rented a cheap apartment in Brooklyn and started going out in drag every night of the week. In the early 2000s, drag was all but nonexistent in Brooklyn. With the exception of a few predominantly straight dive bars where she cajoled the managers into letting her host an occasional drag show, all of Thorgy’s gigs were in staid Manhattan, where her sense of humor and strangeness weren’t entirely welcome. She dressed as a penguin one night, a bumblebee the next; she’d pantomime to a violin concerto, then lip-synch to the song “Fuck Me,” a parody R&B ballad by comedian Wendy Ho, with the lyrics, “You can fuck me in Pakistan / Blow my coochie up like the Taliban.” When lip-synching to Beyoncé’s “Listen,” Thorgy pushed her fluffy wig aside at the first chorus to reveal a giant ear. It was funny and absurd, but Thorgy approached the jokes with the intensity of a prima ballerina on opening night.

All this conceptualism began to draw crowds, and the gigs piled up. Her bald ambition helped her convince the manager of the Ritz to let her, Azraea, and Veruca have free rein on Tuesday nights. Saliva! quickly became a destination for high-profile out-of-town queens looking to work out their most daring material. “We brought the freak to Hell’s Kitchen,” Veruca later said. They were inspired by the club kids who’d dominated New York City night-life during the 1980s and turned dressing into an art form. Aliens, horror, gore, feathers, latex, old Hollywood, and high fashion. But unlike the club kids, the Saliva! crew were performing drag queens.

At the Ritz, Aja and Esai had watched — baffled and delighted — as Saliva! upended everything they thought they knew about the rules of drag. They friended Thorgy and the other artistic queens on Facebook and followed them to their gigs. Though several other bars had shut their doors to Aja and Esai, Thorgy had a ringmaster’s instinct for spotting talent, and she believed that freewheeling fun was worth the risk of chaos.

“I’m not a queen who does, like, voguing and dropping to splits,” Thorgy later said about her decision to let Aja and Esai into the club. “Put a mic in my hand, I tell jokes. I get butts in the seats. I give a good show.” She was always trying to round out her crew of performers. When Aja danced, the crowd lost their minds. Thorgy didn’t care that Aja and her friends were underage and messy. Good drag could be messy — some might argue good drag should be messy. Thorgy put Aja in the lineup for the final set. This was the late-night spot reserved for up-and-comers. Aja wouldn’t get paid by the bar, but she’d be able to keep any tips collected during her number. At 3:30 a.m., the Ritz was still going strong, the audience assembled around the perimeter of the room with a stripe of floor left open for the performers. Aja mugged in a leotard and platform heels, and the DJ pressed play on the track.

During performances, Aja liked to start off slow, stomping up and down the floor, striking a pose, and tossing her wig. It built tension in the crowd. “I was fresh from the ballroom scene,” Aja later said of these early shows. “Although I wasn’t an expert at performing on a stage with people, I did know a thing or two about performing — period.”

As Aja paraded and pranced, she kept her mind focused on the lip sync. Aja liked Britney fine, but she was more interested in female rappers — Lil’ Kim, Nicki Minaj, Azealia Banks. Bad girls who didn’t take shit from anyone. Oozing attitude, she’d toss off a line and strut, plant her feet, and then slowly bend her knees and swivel her hip to savor the raunchiest lyrics. As the song grew louder and more intense, Aja would start to dance. First a few steps, voguing and making shapes with her arms, then she’d move more frantically. As Aja fell backward and slammed onto the floor, she’d kick a leg out toward the crowd. That’s when the tips would really start to fly, tossed with whoops and cheers. The sight of a queen dancing like her legs were rubber bands and her back was on a hinge always brought the room to its knees. People gasped as she dipped onto the floor and bounced back up only to crash-land once more. The music had control of her, and she had control of the room. For Aja, all those months spent dancing with kids from the ballroom scene on the piers were starting to pay off, literally, in small piles of crumpled dollar bills.