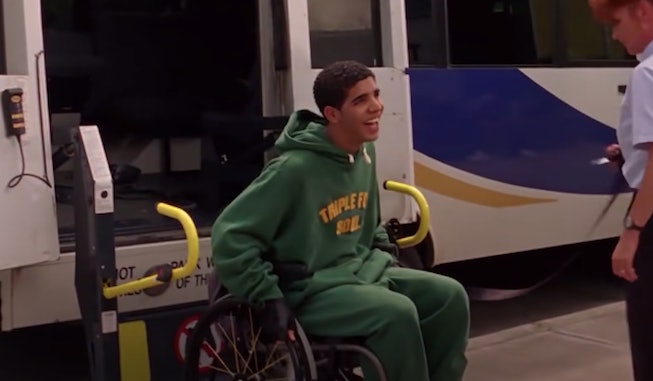 Twenty years ago, Degrassi: The Next Generation aired its first season on CTV. The Canadian teen-soap followed the tumultuous lives of students at Degrassi High, with the intention to shed light on the serious — and sometimes ridiculous — issues teenagers face. Unlike other programs at the time, no topic was off limits (Degrassi really “went there,” as its infamous tagline proclaimed). Through fourteen seasons, series creators Linda Schuler, Yan Moore, and Kit Hood tackled topics like teen pregnancy, substance abuse, school shootings and bullying, while also serving a healthy dose of dramatic romances, breakups, and friendship fallouts.

Best of all, this truly chaotic series introduced the world to celebrities like Vampire Diaries star Nina Dobriv, and most famously Drake (née Aubrey Graham), who began his rap career on the show. To celebrate the series’ anniversary, A.V. Club interviewed the cast and crew, breaking down some of Degrassi’s most memorable moments. And yes, they did talk about the school shooting from Season 4.

In the two-part episode “Time Stands Still,” Jimmy (played by Drake) gets shot in the back by a student who’d been severely bullied throughout the season. The incident lands Jimmy in a wheelchair, which led to groundbreaking plots about living with a disability. Drake, however, was apparently unsure about the narrative.

According to Degrassi writer James Hurst, he received a letter from a Toronto law firm stating that Drake didn’t want to participate in the series unless a change to his storyline was made. “It was an odd letter that said, ‘Aubrey Graham will not return to Degrassi season six as Jimmy Brooks unless his injury is healed, and he is out of the wheelchair,” he said.

Hurst then held a meeting with Drake, where the rapper denied having any knowledge of the paperwork. But he later admitted to being uncomfortable with his character's condition, because his friends bullied him about it. According to Hurst, Drake said, “All my friends in the rap game say I’m soft because I’m in a wheelchair.”

The writer fired back, saying, “Tell your friends in the rap game that you got shot. How much harder can you get?” Somehow, that actually worked, and Drake signed on for another season.

“He was so nice and apologetic about everything,” Hurst recalled, “he instantly backed down.” “I was very passionate about it,” the writer continued, “I said, ‘Aubrey, there’s some kid somewhere in a wheelchair, who’s completely ignored, who’s never on television, never gets represented. I need you to represent this person. You’re the coolest kid on the show, and you can say there’s nothing wrong with being in a wheelchair.”

Thanks to that tenacity, Degrassi continued to push television’s boundaries, and to this day they’re still telling stories that are often cast aside. As for Drake, his career took off and he even paid tribute to his time on the show in a music video for “I’m Upset” featuring his former classmates (and a reference to the incident that almost needed it all).

Watch the video below: