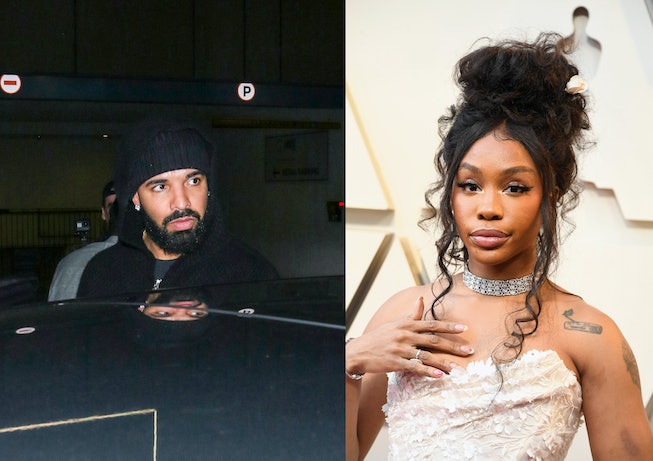 Not one to be subtle, Drake has now claimed that he and SZA used to date back in 2008 in a new song lyric. "Yeah, said she wanna f*ck to some SZA, wait/ 'Cause I used to date SZA back in '08," Drake raps in his feature on "Mr. Right Now," a track from Metro Boomin and Young Thug's new joint album Savage Mode II.

SZA confirmed their relationship on Twitter on Sunday, writing that though they did indeed have some sort of relations, Drake did take some poetic license in the lyric. "So It was actually 2009 lol .. in this case a year of poetic rap license mattered lol I think he jus innocently rhymed 08 w wait . Anybody who really knows me and was around during this time can confirm.. it’s all love all peace ."

She added: "I just didn’t want anybody thinking anything underage or creepy was happening . Completely innocent . Lifetimes ago ."

Shortly after the track dropped, fans initially pointed out that according to Drake's lyric, in 2008 SZA would've been around 17 or 18 years old and Drake, 22 or 23. Though there's not else much public about the extent of the two's relationship, Drake did congratulate the singer earlier this year when her song "Hit Different" dropped, writing on his Instagram story: "Solana is the chefs kiss" alongside a photo of her.

It would be an understatement to say that Drake has a history of unsubtly referencing former flames on his songs; at this point it's an integrated part of his identity. He called out former girlfriend Serena Williams around the time of her engagement on his 2017 track "Nothings Into Somethings," rapping: "Did I just read that you just got engaged on me?/ I heard from your friend, you couldn't even tell me?" And who could forget the infamous Kiki from "In My feelings" and the subsequent hunt to track her down.

Though early articles claimed that SZA reportedly unfollowed Drake on Instagram shortly after the track dropped early Friday, it seems SZA's actually not bothered at all. Still, in the infamous words of Demi Lovato: "Get a job! Stay away from her!"

This article was originally published on Oct. 2, 2020