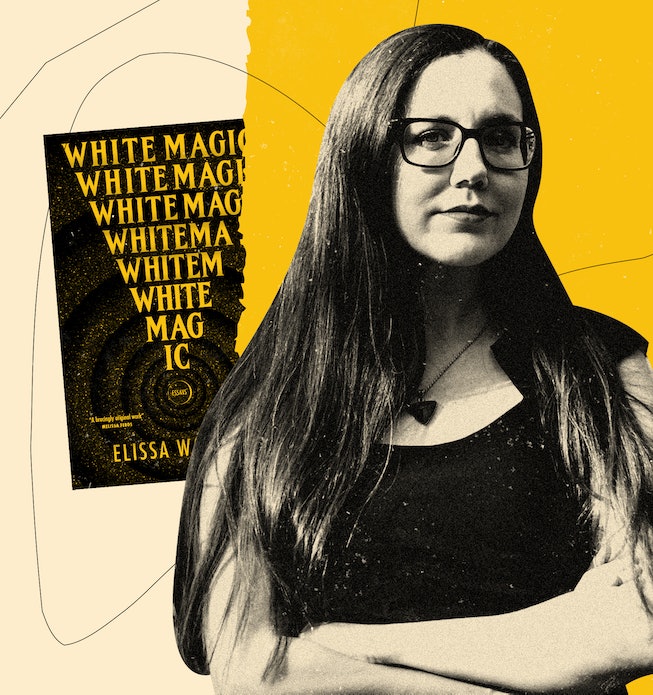 There are a thousand ways to be a witch. Just take the various costumes that writer Elissa Washuta has picked out for the virtual book tour celebrating her spellbinding new essay collection, White Magic. First, a classic: the steely-eyed, crown-wearing Queen of Swords from the tarot. Then, a goth Miss Frizzle. Later, Stevie Nicks on an album cover with gigantic, billowing sleeves. “I’m your typical Stevie Nicks witch,” writes Washuta with a wink, before completely dismantling the relationship between witchcraft and white women’s obsession with it.

Washuta is a member of the Cowlitz tribe, native to the Pacific Northwest. Her great-great-great-grandfather Tumulth was hanged for treason for his alleged involvement in an attack on settlers, a claim that his family disputes. The violence still haunts her. It echoes through every essay in the book, whether she is talking about her experience with addiction in relation to how white settlers first introduced whiskey to Native people, or confronting colonization through the lens of playing The Oregon Trail.

As an essayist, Washuta throws everything she’s got into her cauldron, stirring historical research and contemporary memoir into a captivating frenzy. It works like this: a boyfriend chokes her, and she feels it “somewhere in my cells, maybe, Tumulth’s neck in the ligature, the shove of the hang man, the drop, his own body tightening the noose.”

An assault victim herself, Washuta uses this book to conjure the revenge of every Native woman raped and assaulted by those who came to colonize them. “Violence has no homeland, you pick it up and carry it like pox,” she writes before noting a disturbing survey that nearly every Native woman who responded to it had been raped at least once in her life.

The appropriation of Native spiritual tools for white wellness is an under-discussed problem. In “White Witchery,” the essay that looks at witchcraft, the occult, and its roots in native cultures, she writes: “I just want a version of the occult that isn’t built on plunder, but I suspect that if we could excise the stolen pieces, there would be nothing left.”

“It’s not possible to colonize the power of the universe,” she laughs. This is classic Washuta. Even under the weight of both personal and ancestral trauma, she somehow keeps it playful. Like she knows secrets. The essays themselves evolve into elaborate tricks.

Washuta’s not saying you can’t keep your crystals and your chokers, or that you can’t love Stevie Nicks. (Washuta adores Stevie Nicks, remember? There’s a whole essay about her!) But the “plundering” of spiritual resources from Native communities is real. It is, in fact, f*cked up for Sephora to sell a “starter pack for witches” that includes white sage, a traditional Native medicine currently threatened by the over-harvesting of it by non-Natives who sell it to white influencers to burn on TikTok.

“Take it seriously,” she warns as we chat over Zoom from her home in Columbus, Ohio, surrounded by string lights and sacred stones, “and think about where this practice came from. Is someone being trampled in the process of coming to this Instagram spread?” What she’s saying is: if you want to want to dress like the girls from The Craft and cast #spells against your exes, go ahead. Washuta understands the allure, and is herself “into the Instagram witch lifestyle: the long black dresses, the lavender baths, affirmations of being worthy of things.” But just know that the hash-taggable “white magic” of today (defined by Washuta as “plants and candles and things”) hardly belongs to white people.

“It’s not possible to colonize the power of the universe,” she laughs. This is classic Washuta. Even under the weight of both personal and ancestral trauma, she somehow keeps it playful. Like she knows secrets. The essays themselves evolve into elaborate tricks.

Masterfully, she turns pop culture artifacts into narrative devices. From a particular Fleetwood Mac performance to a strange children’s movie called The Adventures of Mark Twain, Washuta creates portals into entire worlds. Whether she is searching on foot for the spot Laura Palmer’s body was found in the fictional Twin Peaks, or catching complicated feelings for a settler man from Red Dead Redemption 2, Washuta effortlessly merges realities, and challenges the reader to keep with the movements of her mind: “I was bored by what I wanted,” she writes in what feels like a spell. “I decided to follow my curiosity about what I desired.”

Then, she lifts the veil. “I’m best as a protagonist,” she writes, her witchery alive on the page. “I can make anything meaningful. Look at all these motifs I made for you, this rejection pain I transformed into epic heartbreak. See what a powerful witch I am?”

We’re talking over Zoom, but I feel close to her. I want to rip my heart and pour it out. Make sense of it all like she does when she writes seethingly about the breakup that nearly broke her: “He says if there’s anything I need to say to him, I should say it. ‘You destroyed my heart,’ I say. And then I became a powerful witch.”

I tell her I too have recently experienced an epic heartbreak. “How can I become a powerful witch like you?” I ask. “How can I make magic out of all this pain?”

“By actually respecting that pain,” she tells me. “Hurting that badly is a profound thing. Hurting is an active process. For me, I had to let the hurt do whatever it wanted.”

Our connection never freezes because clearly Zoom has nothing on a powerful witch.

“In my cases, my heart was broken not only by my own expectations but because I was too powerful for the relationship,” she says. “To break a bond with me because I insist on being an equal? That’s an agent of colonization.”

Magic has a price, which is that pain must play a role. Isn’t that why it fascinates us to see a woman in a box get cut in half? “Men of history, hear me,” roars Washuta in my favorite essay in the collection, titled “My Heartbreak Workbook,” an eviscerating look at the holes that rip us open: “When you talk down to me, f*ck around on me, disappear from me, lie to me, that’s an interesting perspective but actually me, you disrespect a woman made of women knotted in a long string stretching back before massacre ... I have my own blade my own wings my own lanced heart that might never heal but will never need your salve. I do not want you badly enough to let you grip the rim of the hole, climb in, and leave it full of emojis and cum. The hole is perfect and you cannot touch it.”

White Magic by Elissa Washuta is out now from Tin House Books.