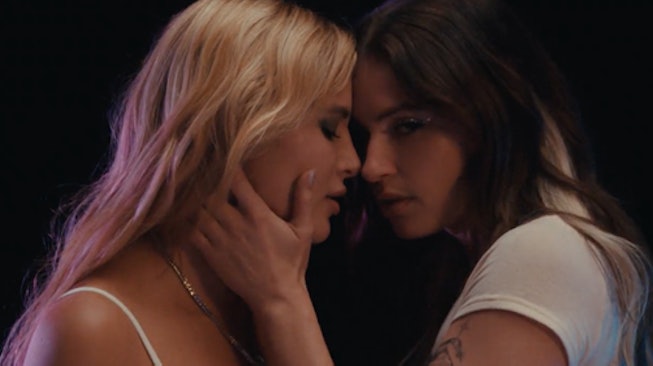 Fletcher’s never shied away from keeping things real, and her new song, “Becky’s So Hot,” is no exception. The track picks up right where her breakup EP, The S(ex) Tapes, left off — only this time instead of pushing the narrative that she’s ready for something (or someone) new, it’s her ex whose moving on without her.

For the uninitiated, Fletcher was once in a highly-public relationship with Shannon Beveridge, a popular photographer and YouTube star. After they broke up, Fletcher wrote The S(ex) Tapes and hired Beveridge to film a series of music videos for the project. Now nearly two years later, Beveridge is dating Becky Missal and their steamy romance quickly caught Fletcher's attention.

In an interview with Zane Lowe, the singer explained that she came up with “Becky’s So Hot” after spotting a photo of the two online. “I was in the studio and I was stalking my ex-girlfriend’s new girlfriend on Instagram,” she said. “I saw a picture of her wearing an old vintage T-shirt of my ex’s, and it’s one that I’ve worn before as well, and I’m looking at the photo and I’m like, ‘Damnit, she’s so hot.’ And I accidentally liked the picture, like, full-on rookie stalker.”

Instead of un-liking the picture, Fletcher chose to turn her complex feelings into a song, and soon after “Becky’s So Hot,” was born. In the first verse, she laments learning about their relationship. “I wake up, puttin’ makeup on a sad face / And Listerine ain’t fixin’ this bad taste in my mouth,” she sings. “Fine, okay, I’ll say, I went and stalked her /And I don’t really blame you ‘cause / Damn, the waist, the hips, the face, this awkward,” she continues.

The rest of the song is an understandably confusing mix of emotions as Fletcher toggles between jealousy and admiration. In one moment, she sings, “I used to wear it too, yeah, it’s the cropped one,” and in the next, she admits to wanting Becky for herself, singing, “I can’t even be mad about it, she flame emoji, wow.” Later her stance is confirmed with the chorus’s revival and concluding sentiment that Becky is “so hot in your vintage t-shirt.”

While Fletcher’s been promoting her new song — which is out now on all streaming platforms — many have wondered if Beveridge was notified before its release. On Monday, the photographer posted a video on TikTok to clear things up. “There’s a lot that I want to say and I want to find a way to do it, but I just think there’s some confusion I would like to clear up, personally, right now,” she said. “Number one being that this is not PR that I’m a part of, this is not a collaboration. Number two,” she continued, “No one asked permission. I just want people to hear that from me because it does seem like there’s confusion on if that is the case, and I just want you to know it’s not.”

Beveridge’s announcement has garnered over a million views on TikTok, while fans debate if “Becky’s So Hot” crossed a line in the comments. So far, Neither Fletcher nor Beveridge have released an additional statement about the controversy. Hopefully, their silence means that both artists are focused on going their separate ways.

Watch the Bella Thorne-starring video for “Becky’s So Hot,” below: